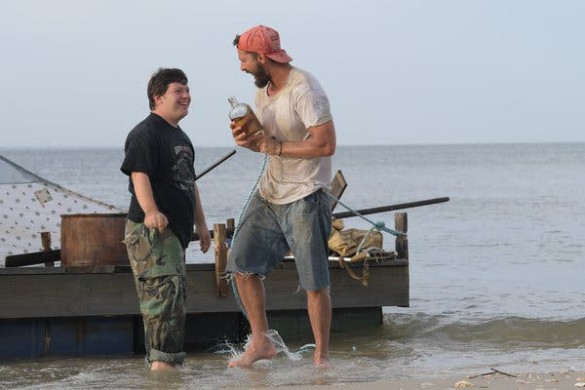 Synopsis: Zak runs away from his care home to make his dream of becoming a wrestler come true.

Tyler Nilson and Michael Schwartz’s The Peanut Butter Falcon features rich, subtle storytelling, a wondrously skilled cast, beautiful photography, and down-to-Earth charm.  The culmination of these elements is a wonderfully poetic and imaginative film that touches every emotion, yet still feels realistic and tangible.  Several dichotomies are at play in the film: good guy vs. bad guy, right vs. wrong, free will vs. duress, urban vs. rural.  The play between these dichotomies is constantly defined and redefined by the films’ characters to a point where all that is left is raw human emotion, and all that remains is each character’s own humanity.

Zak (Zack Gottsagen), a young man with Down syndrome, finds himself inexplicably stuck between circumstances and has been deposited in a residential nursing home.  After his escape plans have all been thwarted, he enlists the help of roommate Carl (Bruce Dern) to help in his newest escape.  Once free, Zak finds himself on the road, heading toward a professional wrestling school, headed by his hero, The Saltwater Redneck (Thomas Haden Church).  Meanwhile Tyler (Shia LaBeouf) has finally hit rock-bottom.  After a perilous altercation and retaliation, Tyler hits the road to escape the dangerous men who pursue him.  Eventually, Tyler and Zak’s paths cross and the unlikely duo find something unexpected in each other.  Once Zak’s caretaker Eleanor (Dakota Johnson) joins the pair, the small group discovers what it’s like to human be and how individual struggles are eased by the love and companionship of friends.

The story is extremely minimalistic.  Two men who have lost their families unite to find common ground in each other.  As Carl states early in the film, “Friends are the Family you choose;” this mantra envelopes the three main characters as the audience learns more about Zak’s abandonment and Tyler’s deadly mistakes.  The voids left in each other’s lives are filled in an unlikely way.  Tyler’s lust for life allows Zak to open up to a world that has been closed off to him for years.  Zak’s companionship and loyalty give Tyler the hope that he is not the terrible deadbeat he feels himself to be.  The push and pull happening within each character allows this simple story to flourish.

Often at odds in The Peanut Butter Falcon is the constant tug of war between two ideals. One battle is between the urban and rural space depicted in the film. The urban spaces, such as Zak’s nursing home, feel like a prison, complete with bars on the windows. The space is cold and dreary.  In contrast, the rural, outdoor vistas of the film deliver beauty and wonder as well as infinite possibilities. Here, in the outdoors Zak is free to wander and explore and claim his own life as opposed to the life of duress he feels in his home. In this way Tyler shows Zak the world and once Zak discovers this for himself, well as the saying goes…you can’t put the toothpaste back in the tube. Once the freedom is felt within Zak, he begins to wrestle with the difference between being a good guy and a bad guy.  In the ring, as an aspiring wrestler, Zak must work to define his role as either a hero or a villain.  Likewise, each of these protagonists must look inward to determine whether or not they are good or bad at heart. As that search continues, Zak and Tyler come to grips with what makes them human in odd and endearing ways.

Zack Gottsagen is warm and hilarious as Zak. His personality dominates the screen. Likewise, LeBeouf feeds into Gottsagen’s charm and plays Tyler as understated and confident. The connection between the two actors keeps the audience invested and engaged.  Regardless of where you think the story may lead or what the characters may be thinking, the filmmakers still manage to keep some surprises close to their chests. Overall, The Peanut Butter Falcon is fun, heartwarming, and fulfilling. It’s rare that a film finds a theme and sticks with it regardless of where the story leads.  It works extremely well in this film and I am sure upon future viewings that there are more layers to uncover with regards to this beautiful minimalistic story.