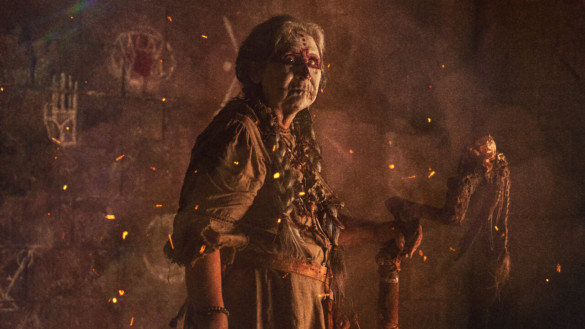 Synopsis: A journalist living in the United States returns to her ancestral home in Mexico to investigate a story, only to be kidnapped by locals who believe she’s the devil incarnated.

The Old Ways is not your run-of-the-mill possession set-up. American exorcism films oftentimes get so caught up in Catholic dogma and iconography that they have a tendency to blend together after a while, so it’s refreshing to see one not compelled by the colonialist powers of Christ. Instead, this film leans on Mexican folklore to tell its graphic and special effects-heavy tale of mystical horror. Director Christopher Alender weaves in some metaphorical elements in order to layer the narrative, but the symbolism is minimal and manages to never undermine the main action. Alender sagely keeps the focus on the story at hand and the characters—led by the captivating Brigitte Kali Canales.

Something dark resides within Cristina (Canales), a journalist from Los Angeles of Mexican origin. This unholy presence has been brewing and shadowing her for years, stemming from the sorcerous event she witnessed as child that kicks off the film. In the opening scene, we see Cristina’s mother in a state of despair as a bruja, using the old ways of treatment, attempts to expel a demon from her, while a young Cristina watches in fright. Now working as a newsperson in the United States, Cristina chooses to return to her childhood home to look into reports of the area’s arcane healing techniques.

Alender and screenwriter Marcos Gabriel, in lieu of twenty-ish minutes of monotonous exposition, audaciously decide to drop the audience right into the meat and potatoes of the movie. Succeeding the cold open, an adult Cristina is already in the jungles of southern Mexico and already imprisoned against her will. In a sense, it feels like the kind of scene that would normally begin Act II. Some viewers may find this confusing or off-putting, but the choice speaks to the protagonist’s own state of disorientation. Learning alongside Cristina why she was abducted and what is to happen to her prevents us from getting too far ahead of the narrative.

The arcs that follow largely consist of a series of brutal and gut-wrenching ceremonial rituals. With each subsequent rite, Cristina is pushed closer to the brink as she’s forced to confront the murky past that has been constricting her troubled present. Brigitte Kali Canales fully embodies the pain that Cristina has been harboring all her life. She’s not only riveting during the multi-stage exorcisms, but also in the intimate scenes in between opposite Andrea Cortés, who plays her cousin Miranda. Miranda never left the village and therefore never severed her connection to her culture in the manner Cristina did. Thus, Miranda eventually acts as a foil for Cristina, as Cristina’s rejection of her traditional upbringing (another reading of “the old ways”) becomes a crux of the matter.

At the helm of this battle of light versus darkness is Julia Vera as Luz, the local bruja. Vera brings a composed ferocity to her character. Luz (which literally means “light” in Spanish) is a part of an outgoing custom, but what I admire most about her and Alender’s approach is their affirmative approach to brujeria. She’s the real deal and a stand-in for a community whose culture is being steadily eroded. The film does not exploit or make fun of the craft, or even entertain the notion that Luz might be a phony practicing antiquated methods. Her ways are undoubtedly fruitful, but require a type of carnal ruthlessness that can be difficult to stomach.

The spectacle is on point. Alender excels when it comes to marrying the audio-visual components. The gore is fairly minimal yet highly effective, and the subtle yet distinct sound design elevates the violence, making it all the more squirm-inducing. Alender does not allow the film to veer into wanton torture porn territory, though. Every clash with the demonic presence inside Cristina is motivated and imbued with humanity, thanks furthermore to Canales’ dimensional performance. The active role Cristina adopts over the course of destroying the devil gripping her soul also helps The Old Ways stand out among its contemporaries. Brigitte Kali Canales pushes her character in so many unexpected directions on her journey to rediscovering her roots that the hard pivot the film takes in its final act actually works.