Movie Review: ‘All About My Sisters’ is a Long Look at Seeking Reconciliation and Forgiveness After China’s One-Child-Policy 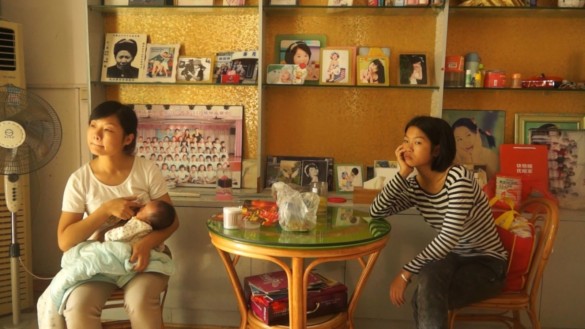 Synopsys: With an HD camera, 22-year-old Qiong investigates abortions and desertion in her family, exploring complex societal power over women’s bodies and trying to heal and reconcile the family’s four women.

One thing that will never cease to amaze me is the beauty of our differences around the world. Getting to know other cultures has been my greatest pleasure in life and I’m always open to know more about them. Also, learning about different politics has made me understand more about my own environment. I come from a very small country impoverished by corruption. I remember that while I was a teenager, the malnutrition, health, and teen pregnancy rates were showing disturbing numbers, and you frequently heard middle and upper-class people repeat over and over how we should replicate the Chinese One-Child-Policy to poor citizens, so we could shorten our population and improve the country’s situation.

It bothered me every time I heard it. I started to ask a lot of questions to those people: how are we going to determine who can have more than one child? isn’t that against human rights? What happens if a rich family suddenly loses all their money? or vice versa?… Thanks to that, I started to get interested in the topic. Years later, when Nanfu Wang and Jialing Zhang’s documentary, One Child Nation, was released in 2019; it became one of my favorite movies of the year. It is a great title, I recommend watching it as it greatly covers the subject.

As soon as the NYFF lineup was announced, All About My Sisters caught my eye. I realized that Wang Qiong’s approach to the matter was different from anything I had seen. You frequently get the political perspective or the testimony of someone like Nanfu Wang. Instead, Qiong used her camera as a tool for her family’s reconciliation after being broken by her younger sister´s failed abortion and abandonment.

Wang Qiong is the second daughter, born at one of the worst stages of the One-Child-Policy in China. Her parents were fined 600 RMB for Qiong’s birth, nevertheless, they insisted on having a boy. Later, when the mom found out she was expecting a third girl, she decided to get a lethal injection. The procedure failed, and Zhou Jin was born at seven months. The parents abandoned her on the road near the village they lived in, but after seven days, the baby was still there; so, they gave her to an infertile aunt. The parents keep trying for a son, and it resulted in four abortions more until the male heir was finally born.

Zhou Jin and her biological siblings grew up as cousins until they were old enough to know the truth. As expected, it opened a wound for Jin and the rest of the family. Qiong takes an objective stance behind the camera: she doesn’t blame her parents for what they did, but she allows her sister to show her anger towards the people who set her to her own death when she was defenseless. In the present, as a mother of a baby boy, Jin doesn’t understand what’s the real difference between being born male or female. But their older sister, Wang Li, swears that if she’s pregnant with a second girl, she will get an abortion (even though sex-selected abortions are prohibited right now).

It’s interesting to see the different connotations of having the “right” to get an abortion this documentary sets on the table. Wang Qiong gives a different approach to a female’s body autonomy and their “right” to access it. That’s the same reason why All About My Sisters can be a heavy watch for some.

All About My Sisters is a slow burn. It lasts three hours and it definitely improves with time, but only if you are interested in the One-Child-Policy subject —otherwise, you’ll get bored in the first five minutes—. It is a minimalistic film and it centers around a single family who is dealing with ghosts of the past. Wang Qiong captured the most vulnerable moments of her family members and through the interviews she makes to them, we get to comprehend a little about their background. It’s important to say that this whole film centers around a family story and it doesn’t stop to explain to the viewer about the Country’s historical aspects. Also, remember to keep an open mind while watching it, given that understanding the nuance behind a different culture from ours can be difficult to understand sometimes.

Wang Qiong says that what we see in her family dynamics is the story of many children —mostly girls— who were abandoned from 1979 to 2015 —while the One-Child-Policy lasted—, due to the male preferences above the female. So, in a way, thanks to her camera she becomes the intermediary of those stories that are still taboo.

As I previously said, this documentary can be too long if you’re not interested in the matter or if you want to watch something more theoretical than testimonial. It’s fascinating what Wang Qiong does behind the camera: she writes, directs, produces, edits, while she is also in charge of the photography and sound. And All About My Sisters is just her film debut, I can’t wait to see what she brings next.