Movie Review: ‘The New Mutants’ is a decent addition to the X-Men franchise 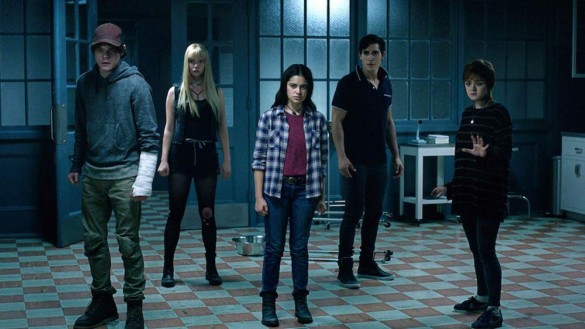 Synopsis: Five young mutants, just discovering their abilities while held in a secret facility against their will, fight to escape their past sins and save themselves.

The New Mutants isn’t the best X-Men film, but it’s definitely not the worst. It’s an odd mash-up of teen or coming of age flick with bits of psychological horror thrown in for good measure. It gives the audience a variety of interesting characters with different powers and backgrounds but doesn’t fully give any of them a good arc. The film also comes with a lot of baggage due to its original 2018 release date being pushed back several times for reshoots, editing, and then Disney’s acquisition of Fox. Even with the indeterminate genre and the assumed expectations brought on by years of delays, The New Mutants is an interesting addition to the X-Men franchise, worthy of checking out.

The New Mutants follows the main protagonist, Danielle Moonstar (Blue Hunt), who is admitted to a hospital after a traumatic event. She is told that she is a mutant with undetermined powers and she, along with four others, is there to learn what her powers are and can’t leave until Dr. Reyes (Alice Braga) decides she can control them. The group dynamic changes after Dani arrives and unexplained things start happening at the Hospital.

This film’s greatest asset is its diverse group of characters. Each mutant has a has their own past, problems they have to overcome, and new powers to deal with. The New Mutants are not a group of characters we’ve seen before on the big screen (save for one, Sunspot, but he was barely in the previous movie). That’s one of the good and bad things about bringing any of the X-Men to life- there are so many to choose from. There are over 200 characters that belong to the X-Men at one time or another so you never know who you’re going to get when they make a new movie. The New Mutants features Anya Taylor-Joy as Illyana Rasputin, an abrasive but powerful mutant who is the only one who seems to understand what’s actually going on at the hospital. Maisie Williams plays Rahne Sinclair, the most welcoming of the group and a devout Scottish catholic with a werewolf-like mutation. Sam Guthrie is portrayed by Charlie Heaton, a shy but polite country boy who always seems to have a lot on his shoulders. Roberto da Costa is played by Henry Zaga, a Brazilian playboy with wealthy parents who doesn’t like to talk about his past.

This film was much less teen horror and more psychologically disturbing than I expected. I had to double-check the rating because at times it felt more R than PG-13. This isn’t necessarily a good or bad thing, just not what I was expecting from a movie with a PG-13 rating about teenagers. I like the dark and scary side of comic book films and look forward to seeing more with a horror twist to them. The New Mutants does a great job building tension and creating scary scenes without the overuse of jump scares. Another positive check for this movie is the effects. After two years of delays, you’d hope they nailed the look of the mutants and their powers and they more or less did. Rahne was a little teen-wolf looking at times, but all movies (and tv shows) seem to struggle coming up with a convincing-looking half-wolf/half-human

Overall, I enjoyed The New Mutants but there were a few things that I had an issue with. The most problematic is the racist comments Illyana makes towards Dani. She says offensive things to Dani about her Indigenous background, including derogatory remarks about buffalo and even calling her “Pocahontas”. I’m not sure why this was included? Illyana is rude and abrasive and openly admits to killing people, but racist comments are out of character for her and therefore unnecessary. It did nothing for either character that couldn’t have been accomplished with your run of the mill teen bullying. The only explanation I can think of for including it is either the director and writer are oblivious to how offensive those comments are, or they were trying to make fun of things President Trump has said. Either way, it didn’t work, they shouldn’t have been left in there, they had two years to realize it was a mistake so I’m going to hold it against them. Additionally, Roberto’s (Henry Zaga) backstory is the only one that was dramatically changed from the comics. I’m not sure why they would do that when the others were fairly similar to their source material. In the comics, his powers are initially triggered after a racially motivated attack and they didn’t use that for the film. Especially in today’s world, why would they change something so (unfortunately) relatable and on top of that include the racist dialogue aimed at Dani? It doesn’t sit right with me.

Another complaint I have is with the character development. I felt that it was rushed; one minute the characters are struggling with their inner demons and don’t have control of their powers, the next they’ve mastered them and are amazing teenage mutants. They skipped a step and it was noticeable. They also didn’t explain Dani’s powers very well, especially the beginning of the film and why her powers manifested in the first place. I’m eager to see these characters in future films- learning from Professor X maybe? – I am interested to see what is next for the New Mutants.

To wrap up, The New Mutants is an interesting film. I both liked and disliked it, either way, I would definitely watch it again. Anya Taylor-Joy was a clear standout and if she does not appear in future Marvel/X-Men films I will be both furious and devastated. The film definitely pushes the limit on PG-13 so if you are considering taking kids to see it, I would watch the trailers and read some reviews before making that decision. All in all, a decent addition to the X-Men franchise.