Movie Review: ‘The Man Who Killed Don Quixote’ is a funny (if unhinged) adventure from Terry Gilliam 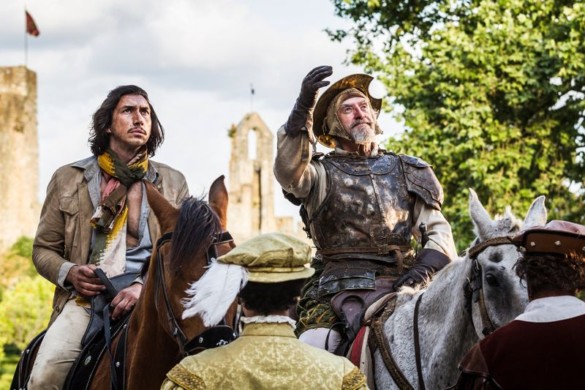 Synopsis: Toby, a disillusioned film director, becomes pulled into a world of time-jumping fantasy when a Spanish cobbler believes him to be Sancho Panza. He gradually becomes unable to tell dreams from reality.

“We must always believe in ourselves…whatever the cost. It is our story, Sancho…”

What most resonated with me in Terry Gilliam’s latest fantasy film The Man Who Killed Don Quixote is this notion of creative individuals taking control of their destiny. Toby (Adam Driver) is a disillusioned director who now mostly works on commercials at the whims of advertising agencies. Nothing against advertising agencies – I work for one! But clearly, Toby is not where he wants to be in life.

While at work on his latest project, a commercial featuring Don Quixote and Sancho Panza in rural Spain, Toby is reminded of his first student film that he made in a small, Spanish village – also about Don Quixote. There he found a shoemaker who had just the look he needed for the lead role of Don Quixote. He is a man who looks like he could sell insurance. His name is Javier (Jonathan Pryce), and Toby casts him as Don Quixote. He also cast Angelica (Joana Ribeiro) in the film, a choice that has repercussions on the small town after Toby convinces her that she will be a star.

All of these actually does come back to Toby when, attempting to get away from the craziness of the commercial shoot, he finds himself face-to-face once again with Javier – who now believes himself to be the real Don Quixote. He calls Toby “Sancho” and he exclaims that it is a “wonderful day for adventures!” From here on out, the story has a fantastical element to it that blurs the line between dream and reality.

It also considers a different line – the line between lunacy and genius. Toby is repeatedly referred to as a genius, but then others think he has gone mad at various points in the film. But it all goes back to the quote from Javier that led off this review. It is the story that must be adhered to. Outside it make look crazy, but that self-belief must be present to carry the story through.

It is clear to see how Gilliam would have a deep love for the power of stories. He is, himself, a genius creative mind who has given us some of the most unique cinematic stories of our time. Here, you can see some parallels to his earlier film The Fisher King. There, too, you had a man who some would consider to be a lunatic who believed himself to be a on an epic quest. Robin Williams brought that role to life in thrilling fashion. Here, Pryce fills a similar role in powerful and humorous ways.

The performances really do give the film its power. Driver is fantastic in the lead role. I’m proud to say that he is from the same area in Northern Indiana where I grew up. He has become a fantastic actor, and he routinely works with some of the most fascinating directors in the business. Here, his talents are on full display.

However, it is Pryce that steals the show.

His performance has an unhinged quality to it but he never lets it reach the point of caricature. There are hilarious moments, and there are tender moments. Pryce nails every beat. I believe he is one of our most criminally-underrated actors. He always brings an extra quality to the roles he plays, and it is no different here.

So far, I’ve focused on the areas of the film worthy of praise, and that’s intentional. But I don’t think the film as a whole ultimately works. Why? Maybe it has something to do with the fact that it took Gilliam decades to make the film. He originally started on it in 1989, but shooting did not begin until 1998. Then, after many setbacks during production, the film was cancelled and it took Gilliam years to secure funds and find a cast. Finally, we have the finished product before us.

It’s a fascinating story, and Gilliam should be credited for having such a firm adherence to his idea. But I do wonder if that much time and so many different people taking part in the project diluted the final version. There have been other long-stagnating projects that have worked wonders – Terrence Malick’s The Tree of Life comes to mind. I couldn’t begin to tell you what the magic formula is. That’s probably because there isn’t one. Maybe it has nothing to do with all the different minds involved in production. Maybe it only has to do with what took place in Gilliam’s mind. Maybe the many years brought on a swell of ideas that simply could not all be worked together. I’m not sure, but the final film certainly feels weighed down by the pressure of having so many threads attempting to be tied up. When a Trump joke shows up, you realize that Gilliam might have strayed a bit from his original idea.

That’s not to say that the experience is wholly stained. Overall, I enjoyed the film. The performances carry it through, and it is legitimately funny and enchanting. The beautiful scenery and the striking cinematography from Nicola Pecorini also add much to the experience. Even if the finished product doesn’t fully hit home, the film is a testament to the power of ideas and the lengths we must go to preserve them. Gilliam certainly displayed that by even getting the film made, and I think it will long be a testament to the creative spirit.