Movie Review: ‘Avengers: Endgame’ is a triumphant, beautiful conclusion to the Infinity Saga 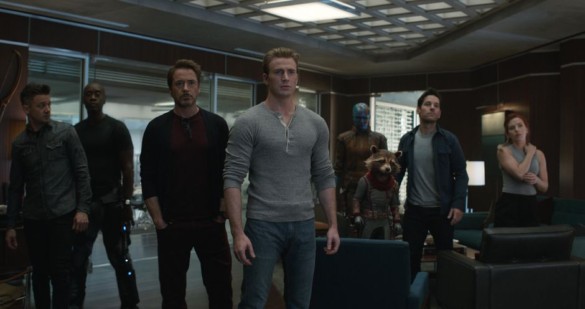 Synopsis: After the devastating events of Avengers: Infinity War (2018), the universe is in ruins. With the help of remaining allies, the Avengers assemble once more in order to undo Thanos’ actions and restore order to the universe.

***This review will be spoiler free for Avengers: Endgame but will talk about the events in the previous films in the MCU. If you have not seen Endgame or other films in the MCU, come back and read this when you are all caught up. You have been warned! ***

Where were you eleven years ago? Were you in school learning all you can for the job that you wanted to get once you were out of college? Heck, were you in high school still getting ready for college? Were you single and still mingling or were you just meeting the person you were going to spend the rest of your life with? Or maybe you were just a normal, casual movie fan that went into the first film of the 2008 summer looking to see what the director of Made and Elf, Jon Favreau, was going to be cooking up in a genre that hadn’t seen its best days yet. A film that was going to be giving you with an adaption of the Marvel comic book character that no one, besides comic book readers, knew and starred a lead actor that was a risk for the studio to take on at the time. But the film came out, it defied all odds, became a smash hit, and from the moment Nick Fury showed up at the end-credit scene, we were off on what is now a twenty-two film franchise that has shaped what the modern blockbuster is, for good and for bad (but that is for another discussion at another time). We have seen highs and lows in the MCU but over the last couple of years, the Avengers Saga has given us some of its strongest films to date with Thor Ragnarok, Black Panther, Captain Marvel and Avengers: Infinity War, the later one which changed the franchise forever, lead to an entire year of speculation while also leading to what will be known as the biggest film to hit the screens in the year 2019, Avengers: Endgame.

Avengers Endgame begins right where we left off with the events of Infinite War, where the evil titan Thanos (Josh Brolin) has completed his mission and whipped off half of the population in the entire universe, including half of the Avengers team and the characters that we have grown to love. The Avengers are separated, with Tony Stark (Robert Downey Jr) and Nebula (Karen Gillan) floating out into space while Captain America (Chris Evans), Thor (Chris Hemsworth), Black Widow (Scarlett Johansson), Hulk (Mark Ruffalo) and the remaining Avengers are on Earth trying to come up with a plan to track down Thanos and reverse what he has down and bring back all that were lost when we snapped his fingers. And that is literally all of the backstory one would need to enter into this film. The characters must sacrifice everything and lay everything out on the line if they want their mission to be successful and fulfill the vision that Doctor Strange saw in Infinite War.

The film is an epic three-hour film that’s three-hour structure on paper would suggest another action spectacle like Infinity War. But instead of that, we are given a full three-hour film filled with some of the best character building and emotional relevant scenes to come out of any franchise film this decade. The film doesn’t go for the easy expectations that we have been thinking about for the last twelve months. Instead Endgame keeps you on the edge of your seat with compelling drama that makes our characters have to examine not only their action from Infinity War, but a lot of decisions from most of the past films and how their actions have led to the result that Thanos has carried out. This is when the film is at its best, with some of the first act scenes feeling like it took cues from the HBO drama The Leftovers, in how the world that was always vibrate and eager to be saved by the Avengers, is now reduced to sadness and empty of all things hopeful. The film is not all gloom and doom, with all the credit going to screenwriters Christopher Markus and Stephen McFeely, who find a way to balance everything perfectly with the tone of this film They, along with the directors, give the audience everything they want while also making sure it makes sense for the story and characters. They give our heroes the mission of their lives, and with the traditional MCU humor, mixed with this serious tone, Markus and McFeely give one of, if not, the strongest script the MCU has given us yet.

And within the fantastic, layered scripted, we are given some of the best character moments and with that comes some of the best performances within the MCU from Downey, Evans, Gillan and Paul Rudd as Ant Man. Rudd, who much like Benedict Cumberbatch in Infinity War, is the actor in this film that may not be the biggest named Avenger but he becomes the most important to the story being told and Rudd knocks all of the emotion elements out of the park that aren’t in the stand alone Ant Man films while also giving that charm that we know he can give within these films. Gillan, whose Nebula started as a villain in the original Guardians of the Galaxy film, shows what she can do when give a larger role in the stakes of the film and truly shows some of the best character growth within the film. Then there is Downey and Evans, who are the among the pillars of the MCU and are part of the original six Avengers that teamed up to form this team a couple of years ago. Their performances bring out every crayon in the box and paint beautiful acres for both characters and show just how much fun they have in these roles and show how much time we really have spent with these two to give us tears of joy when watching them on the screen.

The rest of the cast gives solid performances, with Ruffalo and Johansson giving their best performances in an Avengers movie since the first one and Bradley Cooper giving us another great turn as Rocket Raccoon. Chris Hemsworth, who I thought gave the best performance in Infinite War, takes a little bit of a step down in this film, which is not to say he isn’t good in the movie, it’s just he isn’t as strong in this film because the focus isn’t on him as much. Brolin gives another menacing performance as Thanos but, just like Hemsworth, the film really isn’t focused on him till the final act, so it’s mostly a good performance but a decrease from his last outing. But the biggest congrats I can give Endgame is that after twenty-two films in the franchise, the filmmakers finally give Jeremy Renner’s Hawkeye something meaningful to do and he shines brightly on screen because he is the human embodiment of the tone that this film is trying to go for and he delivers everything he is given perfectly.

When talking about the script and the actors, I have yet to mention the directors Anthony and Joe Russo, who have been a part of this franchise since Captain America: Winter Soldier. The Russo Brother have been up and down for me considering I really liked what they did with Winter Soldier and didn’t care for what they did with Civil War. That being said, they won be back over with Infinity War and now have me sold on them for good with Endgame. Their sense of scope in these last two Avengers films have been great, from going to planet size wars to quiet, contemplative human moments to moments of humor that bring us closer to the characters that we knew long before they took over the franchise. They know how to balance the right tone in these Avengers movies, something that Joss Whedon had a trouble with in his tenure at the helm of the Avengers films. A story of this size and having to bring everything together shouldn’t work and yet it does. You can tell by watching this film that they know that they have the weight of the world on their shoulders, with the highest of expectations and the direction of the film seems unfazed by any of the outside noise. What the Russo Brothers deliver is nothing short of the perfection in terms of tying everything from the past movies together into the story of Endgame and it all making sense, while also giving us iconic shot after shot and moments in this film that will go down as some of the best in the MCU. When Marvel goes forward with more Avengers films in the future, I trust these guys to stir the ship in the right direction and give us something more than just a movie of fan service, but a cinematic event that won’t be topped for a while.

Overall my experience with this film is one that I can’t begin to even describe. As someone that has gone hot and cold on the MCU over the years, wanting to get back the hope and promise this franchise gave me with that first Iron Man film, I have to say that Avengers: Endgame brought me back one-hundred percent into what the MCU is doing. They finally gave me a film with massive stakes, human connection and delivered it all in one package that feels like what this generation will one day sit down and show their kids, much like the original Star Wars trilogy with our parents’ generation showing that to us when we were young. The future is uncertain for MCU as to where they go now after giving us all three hours of this dramatic, bombastic conclusion to a huge chapter in the superhero genre. But rest assure, just like I was in 2008, I can’t wait to see what they will bring us and hope it continues to be something to marvel at.

Hear our podcast review on Episode 323: