Movie Review: The Lady in the Van is hard not to like 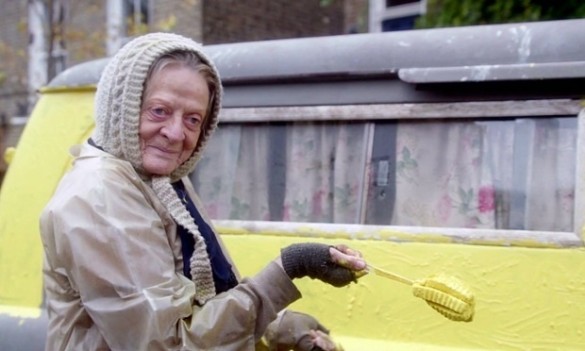 Synopsis: A man forms an unexpected bond with a transient woman living in her car that’s parked in his driveway.

If you’re not familiar with The Lady in the Van, it’s a film based on the Alan Bennett play of the same name. And in a weird way, if you’re a fan of Deadpool and charming indie films, then this film is right up your alley. Like Deadpool, but to a lesser and cleaner way, The Lady in the Van is very meta and the Alan Bennett character is very aware he’s in a film. Bennett works as the narrator here but his narration comes in the form of a personified duplicate of himself, to whom he talks to throughout the entire film. There are also moments where the film pauses, and to say vaguely as to not spoil it, that become more obvious in it’s meta storytelling, as to honor the subject of the film, Miss Shepard.

Miss Shepard (Maggie Smith) is older and homeless but has the comforts of a van that she lives in, as for her it’s all she needs. She parks and makes home outside the house of playwright Alan Bennett in Camden, London. While awkward at first, Bennett sort of, well shepherd’s her and gives her assistance as needed. What was supposed to be a few weeks until Miss Shepard found a permanent place to live became something neither of them ever imagined. The two form a relationship that is zany, quirky and full of hilarity.

It’s not all fun and games though, Miss Shepard is a bit distant and indignant at times. She’s cold and bitter, even when people are being nice to her. However, there’s a reason for all her abrasiveness. As the film peels back the layers of who Miss Shepard was, there’s deep levels of regret and unforgiveness that have eaten her all these years. A lot of it wasn’t her fault but she shouldered these emotions to significant levels and it’s taken it’s toll on her.

Overall, The Lady in the Van isn’t necessarily going for profundity or trying to be revealing of anything deep but it’s ideas around regret and treating people with respect do come across genuinely. The film is wanting to have fun and depict Miss Shepard in a way that is honoring to her crazy but lovable story. But they don’t stifle her problems either. She was someone who struggled throughout her later years in life and that does come across on screen well. Maggie Smith is terrific in a role that she just eats up in the most endearing way possible. The balance of irascible biting depicted throughout but also the necessary sympathy you feel is magnetic in Smith’s performance. Alex Jennings is also wonderful playing Bennett (both versions) and the chemistry between Jennings and Smith is visceral in every glorious way.

The Lady in the Van succeeds at exactly what it’s trying to attempt. It’s a feel-good story about a captivating individual who just shows up on your doorstep one day. How do you cope with that? Bennett had a deteriorating mother at the time. Did he need this in his life? Could he have just told her to leave? Probably. But what does it say about the actions he chose? Yeah, this film is a fun exploration between two juxtaposing characters but there are some great questions that arise that seem simple on the surface, but would you react the same if you’re being honest? If you ask me, the film earns those honest questions.