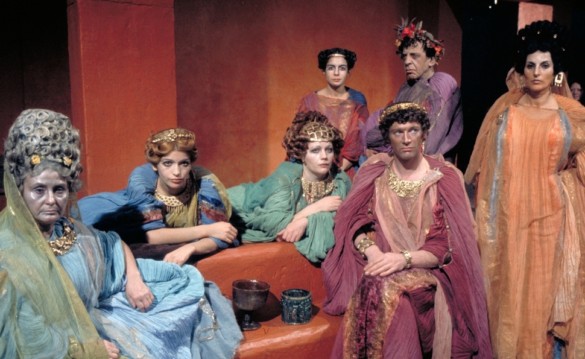 Federico Fellini is a director who inspires fierce devotion from his greatest fans. His most fervent devotees are particularly drawn to the work that he produced following Nights of Cabiria (1957). He gave into his base impulses and chose to turn himself into a showman who alternately condemned and celebrated the vulgar excesses of the rich and the beautiful. I will admit that I have always struggled with Fellini because of this approach. To me, there seems to be something horribly hypocritical about his brand of moralizing and showmanship. He licks his lips with glee whenever there’s some taboo sexual act occurring on screen but then turns around and presents us with a scene in which one of his sexual partners sadly ruminates on their feelings of guilt and worthlessness. There is something dishonest about his refusal to call a spade a spade and accept that he enjoys the supposedly controversial, shocking acts that his characters perform.

It’s a funny thing to take issue with because so much of cinema is grounded in this sort of moral hypocrisy. You get to live out fantasies of what it would be like to do something naughty or scary but don’t have to analyze why we have some of these darker impulses. The clever filmmaker is there to let us off the hook and allow us to delude ourselves into believing that we are disgusted by what we see on screen. Fellini seemingly keyed into the fact that audiences wanted that. I could simply accept the fact that he was catering to his target audience but I resent the fact that he had to add an extra layer of pretension on top of this manipulative approach. He managed to convince high minded critics that he wasn’t just a showman in the tradition of Cecil B. DeMille. He was viewed as an auteur who deserved to be taken seriously and the chic despondency of his characters made them seem like more than just thin constructs. For years, he was garlanded with accolades and laudatory reviews for some of his most lowbrow works. Why, exactly, did this need to happen?

A film like Fellini Satyricon (1969) is one of the major beneficiaries of Fellini’s unique mystique. He was so controversial that defending one of his cause célèbres was a badge of honor for critics. They got to pretend that critics who objected to the film were just squares who couldn’t overcome their prudishness in order to appreciate Fellini’s genius. The trendy critics would sit there and pontificate about how the film wasn’t ‘really’ about sexuality or gratuitous violence. They got to have fun inventing some long-winded theory about how the film was really a drawn-out metaphor for the Paraguayan War, based on a few throwaway lines. It’s possible to write an entertaining review about a film that was incredibly dull to watch. On one hand, that’s their job and they are expected to come up with this sort of waffle. On the other hand, they don’t need to be quite so smug and disingenuous when it comes to defending the Enfant Terribles of the cinema world. We get it, you’re just a little bit edgier than those of us who don’t always see controversy as a reason to view a piece of art as deep and meaningful.

I find myself talking about the hype that Fellini’s work received, as much as the content of the films themselves. That’s because Fellini Satyricon is far more memorable as a cultural event than as a film. It’s excruciating to sit through and you almost feel like you are watching Fellini trying to ape himself as he turns everything up to eleven. There is no point at which it feels like he decided to rein himself in or get a second opinion on some of the decisions he made in relation to the script. It feels as though there was little consideration put into many of the creative decisions that he made and this added to the overall feeling of messiness. He just threw everything at the wall and hoped that something would stick. In this case, nothing did.

There were moments when I was floored by the fact that this film must have had a massive budget but I would quickly notice that it had been poorly used. Scenes were over-lit and the performers appeared as though they were in some trashy adaptation of a Jacqueline Susann potboiler. Everybody moves in the dancerly rhythms that Fellini often favored but he doesn’t seem to be saying anything with this choreographed motion. He’s just idly playing around with the tricks that he’s had up his sleeve since his first started working as a director. This film doesn’t represent any meaningful growth when it comes to his technical approach to moviemaking or the view that he took of the themes that he was always preoccupied with.

I came out of this with a headache and I think that any sane person would feel similarly uncomfortable after choosing to put themselves through this.