Movie Review: ‘The Kid’ plays it safe in the wild, wild west 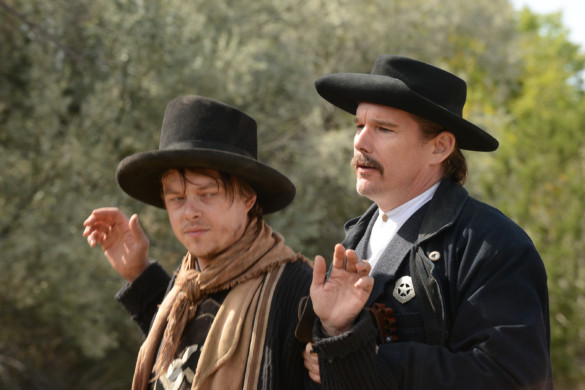 Synopsis: The story of a young boy who witnesses Billy the Kid’s encounter with Sheriff Pat Garrett.

The quintessential American genre, the western has sought to combine historical stories and cinematic fiction to deliver a rich, beautiful depiction of man’s conflict with untamed nature, man’s unchecked lawlessness, and the danger of the other. The western has always secured a place in the heart’s and minds of Americans and can seemingly transcend time and space to contour human emotions and efforts that define the humanity of our past, present, and future. Vincent D’Onofrio’s The Kid is the newest installment into the annals this fruitful genre.  The Kid follows Sherriff Pat Garrett (Ethan Hawke) as he tracks down the outlaw Billy the Kid (Dane DeHaan). Along the way, Billy and Pat meet up with a runaway brother and sister (Jake Schur, Leila George) whose past is shrouded in guilt, fear, and revenge. As Garrett attempts to bring the Kid to justice, he grapples with mounting questions surrounding Billy and his newfound friends.

In the tradition of previous westerns, D’Onofrio’s The Kid has an exquisite beauty due to a combination of slick yet minimalistic cinematography and beautiful landscapes that define the American west. The believability of westerns often hinges on the harshness of the wilderness as men attempt to tame it and themselves. The Kid works well to manifest this aspect of the genre into a cinematic experience that dazzles. In that beauty of the wild, the actors are exquisite in their roles. Hawke and an almost unrecognizable Chris Pratt steal each of their scenes and bring a fierceness to their roles that seems right at home in the wild west.  Dane DeHaan’s Billy the Kid seems rather one-sided in comparison and rarely, if ever, allows the audience to understand his inner thoughts and emotions. Whether this is conscious on the part of DeHaan (and/or D’Onofrio) or not, it acts as a roadblock that almost seems insurmountable. This is especially concerning due to his centralized role on which all other character’s stories revolve. However, this is an entry point into the lack of depth of characters and story.

Besides Hawke’s Garrett, other characters do not work well in the environment they are inhabiting.  They seem to exist merely on the surface and never fully engage with their world. Unfortunately, this could be due to a plot that relies too much on a perceived knowledge of the historical events that led up to and include Garrett’s confrontation with the Kid. As I researched the actual story, I became aware of certain aspects of Garrett and the Kid’s history that would have given the story more tension, as well as upping the stakes. But without this knowledge, the film seems one-sided and unbalanced. It is unclear as to the character’s intentions because the narrative never allows the audience access. In this way, the viewer feels unattached and unconcerned with the fate of the characters. In a saving grace, the formula for a western grants the audience an understanding of where the story will end. This is where The Kid shines.  The third act is taut and riddled with suspense. It feels like a reward for the previous two lackluster acts, but that begs the question: where was that effort throughout the film?

The Kid has its moments as the characters travel through a beautifully filmed landscape, however the endless speeches from one-dimensional characters bog down a story that has the potential to tell the story of two troubled and conflicted men. The Kid is serviceable as a western, but lacks the needed tension and stakes that keep the audience engaged. If you can stick with it long enough to enjoy the second act, you may leave the theater with some feeling of satisfaction. However, too many holes exist in this beautifully filmed tapestry of the American west.