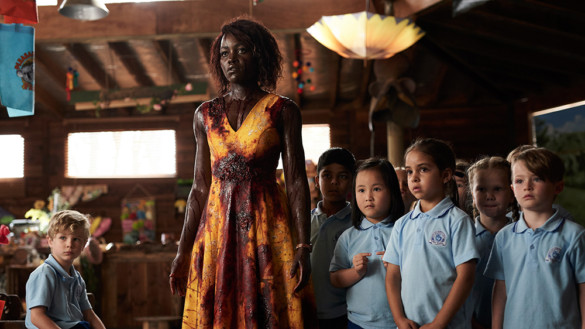 The weather in Austin for Day 5 of my coverage at South by Southwest was muggy and damp but yet it was the perfect day to stay in the theater and catch up on titles that had already premiered at the festival. Film number one for the day found me back over at the Alamo Drafthouse watching the newest thriller Villains from directors Dan Berk and Robert Olsen. The film follows a couple who are on their way out of town after just robbing their last gas-station before they head to Florida. When the car they steal runs out of gas, they head to a house that is abandoned to look for gas or something to get them back out on the road. But once they enter the house, they realized they aren’t the only ones in the house, and must play a game of cat and mouse in order to leave. The film is a lot of fun and the cast are top notch with good performances from Maika Monroe, Bill Skarsgard and great performances from Jeffrey Donovan and Kyra Sedgwick, who steal the show the moment they come on the screen. I love the world that this film creates and it feels like a great companion piece to last year’s Bad Times at the El Royale, only I like this film more because the themes and overall approach to the story is better executed here by Berk and Olsen and will make for a highly enjoyable discovery for audiences later this year.

After getting out of Villains, I was able to get over to the Long Center, which is one of the premier theaters in Austin, to catch a screening of the Sundance breakout hit Little Monsters. The film follows Stephen Peacocke, who volunteers for his nephew’s field trip after seeing that Lupita Nyong’o is the teacher. But what turns into a regular field trip to a petting zoo turns into an all-out survival when a zombie breakout at the government lab to them goes on lockdown and the zombie outbreak reaches the zoo grounds. The film is a dark, hilarious action comedy in the vein of Shaun of the Dead with some very over the top language like something out of a Scorsese movie. It is a film that feels so real even though we have seen a lot of send ups to action-comedies over the last couple years and the direction of the action scenes are just a strong as the humor. I can feel this become a cult hit with it being a lot of fun to take your friends to a 9:30 screening at night and laughing a lot while also finding a lot of heart from these characters. Little Monsters might not be for everyone, and your enjoyment of the film could be judged by how much you like Josh Gad’s performance in the film. But for me this film was an absolute trip that I could see myself going on again and again like a lot of other films of its style.

My last stop of the day landed me back at the Drafthouse to see Christopher Morris’ The Day Shall Come. The film is about how a preacher of a small congregation starts to be investigated by the FBI, and their efforts to turn him into a home grown terrorists without him even knowing it. The film harkens to the ideas that Spike Lee brought up in Malcolm X along with the comedic timing of In the Loop or The Death of Stalin. It is a political film that talks about what someone will do to protect what they have while also being a film about what we will do to convict someone of something they didn’t even do. The films cast does a fine job, and it takes a while for the film to get going but by the end, the film is so heartbreaking and real that it makes you start to wonder how many of these incidents happen each day. Overall I would recommend the film, though I wish that it was tighter in the script but I liked it overall.

Check back here tomorrow for my day 5 recap and follow me on Twitter @ryanmcquade77 for more coverage of SXSW.