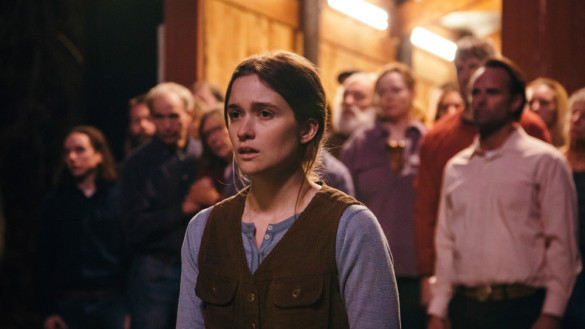 All good things must come to an end and thus day 6 of South by Southwest was my last day covering the Austin based film festival. So being that it was my last day, I went all out and saw four films to complete a six day, twenty-one film journey that I consumed me and made me feel more inspired about film and filmmaking than any other week of my life.

The first film of the day landed me at the Zach Theater to catch Them That Follow, which premiered at Sundance, carried over to SXSW and is the debut film for directors Britt Poulton and Dan Madison Savage. The film follows Alice Englert’s Mara, who is the daughter of a preacher who runs a small community of people that are isolated from the outside world. When she becomes pregnant, it sets off a chain of events that could tear the fabric of the community apart and change their lives forever. The film has a ton of star power behind it that support Englert with Kaitlyn Dever, Walton Goggins, Thomas Mann, Jim Gaffigan and recent Oscar winner Olivia Colman. So with all of this talent, one would assume that the film they are in is worth their time but instead the film seems to waste most of their talent and feels like something we have seen before and can be slow in a lot of parts. The script, which is written by the directors, left a lot to be desired and left their actors out in the cold, leaving them to have to pick up a lot of the slack and thus the film became an exercise in patience and my biggest disappointment of the festival.

Once Them That Follow ended, I grabbed some lunch and then made my way over to the Paramount Theater for the documentary The Boy Band Con: The Lou Pearlman Story. The film, produced by former NSYNC member Lance Bass who also is in the film, is about Lou Pearlman, the man that built the two biggest boy bands in the history of music in NSYNC and the Backstreet Boys and conned not only those bands and many more bands out of millions but also conned investors into various other businesses he owned as well. Anyone that was born and grew up in the 1990’s to early 2000’s will be very interesting in seeing this film because it gives the true story behind all the music you love and the man that manipulated all it into existence. While the film doesn’t do anything to stylistically different than any average documentary, it is a good companion piece to Leaving Neverland because of its conversation about people in power and how they pray on the weak to do what they want them to do. The film will come out later this year on YouTube and I really think everyone should give it a watch because it is a nostalgic yet sad trip down memory lane.

Once the film was over, I jumped next door to the Stateside Theater for The Peanut Butter Falcon, which upon reflection, is one of my favorite films I saw while I was at the festival. The film, directed by Tyler Nilson and Mike Schwartz, follows Zak, a down syndrome kid who escapes from the nursing home that he lives in to go and find a wrestling academy and his favorite wrestler that runs it. While on the run, he encounters Tyler, a fisherman that has burned he last bridge and is on the run from the people that he has crossed. Tyler promises to help Zak out and they set out on an adventure that is extremely charming and moving. Nilson and Schwartz’s script and direction are top notch and you feel completely immersed into this world that they have created and makes you feel that every decision is real and authentic. The cast are on their A game, with what could be my favorite performance from Shia LaBeouf and Dakota Johnson. But the reason to see this film is for Zach Gottsagen’s lead performance, which is the biggest discovery I found at the festival. I don’t want to give too much of this film away but I challenge you to catch this film when it comes out later this year because it’s one that won me over on its charm and fairytale like storytelling that made me think this could be this year’s Mud or Beast of the Southern Wild.

As I left Stateside, I got back in line at the Paramount for my last screening of the festival for the new action-buddy comedy Stuber starring Dave Bautista and Kumail Nanjiani. The film, which is about a cop who hires an Uber driver to get him from point A to B to get solve a big case, was the perfect film to end the festival on. Though I’d love to get into the film more, the film was “a work-in progress” and thus we can’t fully review the film or talk about plot points or moments within the movies due to studio asking for us to wait for a full review till the film is one hundred percent ready. Though the film played all the way through, it was a director’s cut and it will be interesting to see what they keep in and what they cut out in the final theatrical cut. What I can tell you is that Bautista and Nanjiani are comic gold together and are having so much fun and the action in the film, directed by Goon director Michael Dowse, is some of the best that has appeared in a comedy in years. I look forward to seeing the film again and seeing if the next big buddy cop franchise like the 21 Jump Street films.

Thank you for following my SXSW recaps and I am so sad that the festival is over for me. But I had so much fun covering this festival for the website and can’t wait till next year to do it all over again! Continue to follow me on Twitter @ryanmcquade77 for more film coverage throughout the rest of the year.