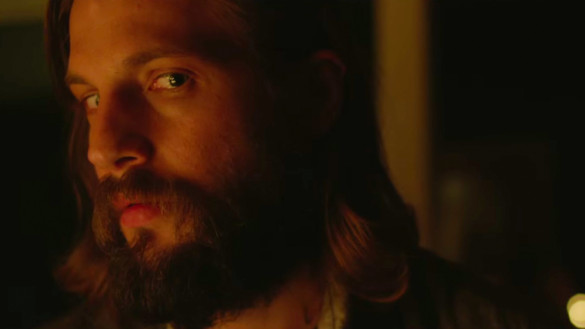 Synopsis: While attending a dinner party at his former home, a man thinks his ex-wife and her new husband have sinister intentions for their guests.

Karyn Kusama’s The Invitation had an intriguing hook that was ripe with potential. Two years out from losing his son in a tragic accident and subsequently divorcing his wife Eden (Tammy Blanchard), Will (Logan Marshall-Green) reluctantly accepts an invitation to a dinner party from his now ex-wife and her new partner David (Michiel Huisman). Additionally, this party is at the home that Will used to share with Eden when they were together, which fosters painful memories in Will during the party. Eden and David’s behavior is also suspect only adding to the chaotic experience.

On paper, that premise is rather enticing. However, the screenplay by Phil Hay and Matt Manfredi and the direction by Kusama fails to balance the tension between Will’s emotional reality and the paranoia he’s experiencing simultaneously. As a result, almost everything about The Invitation felt false. The suspense, the dialogue, the characters, it all lacked authenticity and became too contrived for any real drama to take hold. Kusama’s attempt at making the situation natural, while also providing some doubt regarding the host’s intentions, is rather inept and coarse. In fact, at times some of the characters felt cartoonish in a world where Will’s dilemma was very real. The pacing and tonal inconsistencies not only stifle any momentum that the film builds, but it makes for a very frustrating experience.

It’s particularly disappointing because thematically The Invitation‘s notions on how to deal with death is fascinating. And in execution, there are a few really heartfelt moments that resonate loudly but the film would undercut itself with ridiculous turns immediately after, only adding to that frustration. In one moment Will is cathartically screaming that something is very wrong, then a contrivance happens and Will in turns feels the need to apologize. Put that trope on repeat and you have the entire film since that sequence of events happens several times throughout. It didn’t take long for that to become very tiresome.

The final twenty minutes is well-crafted and the final image is rather haunting but the stakes never resonate due the film’s disproportionate balance. You simply don’t know these characters well enough to care. The film offers heart to engage you but the forced drama in between those moments of heart is eye rolling and disengaging. On top of that, the revelation of what is really going on renders certain moments near the end meaningless given the nature of the host’s real motives. And because the film relies on ambiguity through the first two acts to amplify the film’s mystery, when the film answers everything for the audience, it destroy’s what the film had built up regarding what Will’s reality may or may not be. Marshall-Green’s performance makes you root for Will and even emotionally feel for him at times but sadly, in the end, none of it comes together in way that is earned. Again, it felt counterfeit thus making The Invitation an unsatisfying experience.