Movie Review: ‘The Ice Road’ is a Lazy Action Vehicle for Liam Neeson 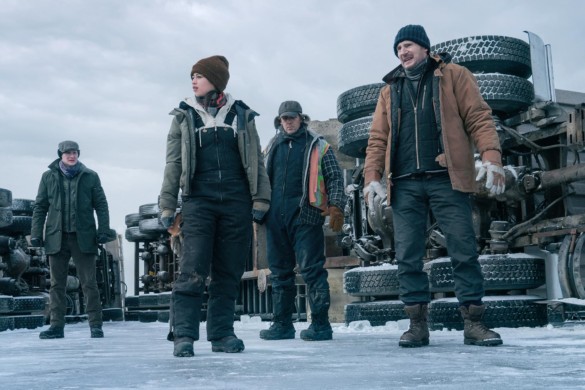 Synopsis: After a remote diamond mine collapses in far northern Canada, a ‘big-rig’ ice road driver must lead an impossible rescue mission over a frozen ocean to save the trapped miners.

As I watched the actors in Jonathan Hensleigh’s The Ice Road enduring one treacherous wintry action scene after another, all I could think about was a line from Roger Ebert’s review of 1998’s Hard Rain: “From beginning to end, I was acutely aware of actors being paid to stand in cold water.” It’s the same sensation we have in The Ice Road, now available on Netflix. There’s not much of a story that engages us, only a familiar action star in Liam Neeson battling the inconsequential bad guys again and making us believe he can win in a fistfight on slick ice with an actor thirty years his junior. All I could think about for most of this film was how uncomfortable much of the filming must have been for the cast and crew, and how little of it was worth the effort.

Neeson plays Mike (no last name—no character in this movie gets a last name), a truck driver who keeps getting fired from one job after another due to his temper when co-workers make fun of his mentally challenged brother Gurty (Marcus Thomas). Desperate to buy a truck of his own, he and Gurty take a job up north to drive trucks over a slick icy road to rescue a group of men at a collapsed diamond mine. Also along for the ride are three truck driver characters whose names seemed pulled directly out of the Star Wars universe—Tantoo (Amber Midthunder), Varnay (Benjamin Walker), and Goldenrod (Laurence Fishburne, in a thankless role).

The set-up to the film actually has promise, and there’s a scene of genuine suspense early on when a character accidentally gets his leg caught in a cable behind a big rig. But when the plot settles in and the true villain is revealed at the halfway mark, it’s difficult to care about much of what happens next. I mean, it doesn’t help that Neeson himself has already been a part of two better action films set in the snow—2019’s underrated thriller Cold Pursuit (which had its share of black humor laughs I wasn’t prepared for), and Joe Carnahan’s electric 2011 survival film The Grey, which has ten times more style and emotion and gravitas than anything in The Ice Road.

One big problem with the film is its pedestrian screenplay, which never gives the characters anything interesting to talk about or any big surprises from the viewer. Hensleigh has written some terrific action films before (Die Hard with a Vengeance, The Saint), but he’s struggled as a director, his 2004 debut The Punisher still the best thing he’s made to date. He has given the film a routine and polished look when he should have gone grittier, more menacing. Lots of obvious CGI shots don’t help matters, especially in action scenes that appear like they could have been filmed entirely in warehouses.

The reveal of the villain is so obvious halfway through that you have to be half-asleep to not see it coming. The action scenes, which might have read more exciting in the script, have a tired feel to them, the editing always a bit too slow, the angles not adding much energy, the lifeless music too familiar and lackluster. And we’re not listening for the best dialogue in the history of cinema in a movie like this, but it’s hard to look past clunker lines like these…

“Do you know why we get fired? It’s not your disability—it’s your freakin’ attitude!”

“You’ve never gonna get away with this. You know there’s gonna be an investigation!”

“They want us to fail. This isn’t about money now—it’s personal!”

The performances are fine, they do the job, but there’s no real standout. Midthunder is a fresh face I hope to see in a better movie, and Thomas does what he can with a fairly underwritten character. Benjamin Walker, whose first movie role was playing a young Neeson in Kinsey, fills the screen with deadpan expressions similar to Jason Patric in Speed 2: Cruise Control that seem to be asking, “What the hell am I doing in this movie? I graduated from Juilliard!” Furthermore, the actor revealed to be the villain is about the least intimidating bad guy since Jesse Eisenberg strapped on a bald cap to play Lex Luthor. Holt McCallany, who appears briefly in the film, would have made a much more convincing villain. Even Matt McCoy, the dad from The Hand That Rocks the Cradle who shows up as sleazy General Manager Sickle, would have been better.

If there’s anything that makes Neeson’s newest a movie a forgettable misfire rather than a complete disaster is Neeson himself, who always brings great presence to a film, doing so again here even when he spends most of the movie behind the wheel looking highly perturbed. He gets to punch at least three people—always a plus—and when he has to go dramatic, like in a tragic scene at the end, the scene comes to life solely because of his outstanding acting chops. We’re a long way off from his Oscar-nominated performance in Schindler’s List, but what you have to admire about Neeson is that he commits to a film every single time even when deep down he probably recognizes this one won’t be included in the Lifetime Achievement reel.

The Ice Road has the feel of a film that in the 1990s would have opened on a quiet January or September weekend, offering a few throwaway thrills and an excuse to eat popcorn in the dark, never to be thought of again. It’s an okay watch I guess for the Neeson action movie completists, but let’s face it—his best films of the genre are long behind him, and his latest is simply running on fumes.