Classic Film Review: ‘The Birth of a Nation’ Left a Horrible Stain on Cinema History 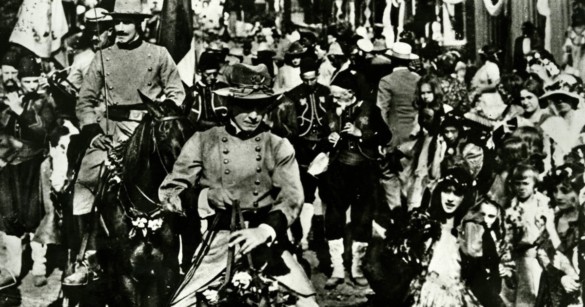 The Birth of a Nation (1915) is a film that actively promotes a racist ideology that allowed whites to convince themselves that they were ‘disenfranchised’ victims of African-Americans. Its enormous popularity with audiences also helped to repopularise the Ku Klux Klan in the mid-1910s and spread the Lost Cause myth. When it has that sort of problematic legacy, it is impossible to view this as just a piece of art. It exists as a valuable historical document because it can tell us a lot about how white Americans deluded themselves into believing that violent, racially motivated attacks on innocent African-Americans were morally acceptable. You can look at it in an academic context and pick it apart as a product of its times but, in trying to watch it as a cinephile, I found it hard to view this as a piece of entertainment. It does exist as a landmark in the history of cinema because Griffith introduced crosscutting, color tinting, parallel action sequences, and dramatic close-ups to the art form. You simply can’t ignore its impact or minimize its influence and that makes it difficult to watch.

It is grand, theatrical, and bombastic in a way that few productions were during this period. Griffith got together the finances to produce a spectacle that was unprecedented in its narrative complexity. He tells the story of the American Civil War from the perspective of two white families who are on opposite sides of the conflict. The Stonemans are depicted as traitorous abolitionists who support the Union because they wish to elevate their own social position. Unionists in general are painted as fools who don’t seem to understand the fact that African-Americans ‘need’ to be treated like slaves in order to keep the fabric of American society together. Griffith contrasts their immoral way of life with the supposedly quaint, touching lifestyle of the Camerons, a traditional, pro-slavery Southern family. The members of the younger generation of each family, directly engage in the Civil War and they all become romantically entangled. After the North wins the Civil War, Griffith implies that society is in ruins and whites are being attacked by dangerous African-Americans. As a result of this, White Southerners decide to ‘defend themselves’ by forming the Ku Klux Klan and violently attacking, murdering and threatening African-Americans. This is presented as a solution to all of their problems and a force for good in the Southern United States.

The film is most stunning in the way that it neatly incorporates all of the technical innovations that Griffith was employing. Unlike The Jazz Singer (1927), which is only really notable for being the first feature length motion picture to feature speech in several sequences, this film is able to craft a narrative around the techniques that are employed. So many early sound films would include scenes that existed purely to show off the fact that you could hear the voices of the actors on screen and this often makes those scenes painful to watch from a modern standpoint. We’re so used to having these conventions be a part of the cinematic language, that they are not enough to excite us. Griffith deploys cross-cutting at just the right moments and stages crowd scenes with great confidence. He could have easily disoriented audience members by cutting between too many different locations but he finds ways to establish spatial awareness and links between the two different events that are taking place concurrently. The seamlessness of his filmmaking is still astonishing, all these years later.

There is also something to be said about how the lavish the production is. The costumes look period appropriate, every room is tastefully directed and Griffith was given the artistic freedom to make an epic. There is never the feeling that Griffith was severely restricted by the interference of producers and he is given the time to tell this story in full. There aren’t character arcs that have been severely truncated or set pieces that have had to be compressed. The narrative flows naturally and when intertitles appear, they aren’t introduced in an overly abrupt manner. This allows this to feel modern than a lot of the silent films that were being made during this era.

You can make all the arguments in the world, but it is still impossible to look past the racial politics. I can completely understand why some feel as though they could never sit through this film and, while it occupies an important place in cinema history, it certainly doesn’t deserve to be considered a beloved film.