Movie Review: ‘The Gray Man’ is The Russos Fight and Travel Bore-Fest 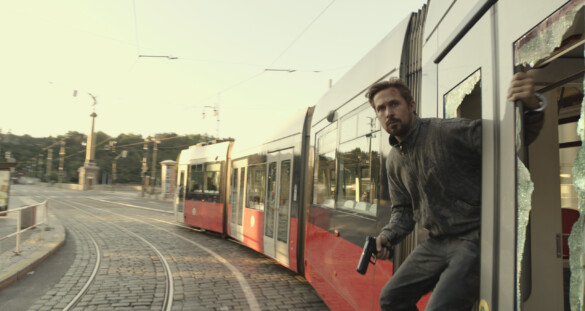 Synopsis: When the CIA’s most skilled operative-whose true identity is known to none-accidentally uncovers dark agency secrets, a psychopathic former colleague puts a bounty on his head, setting off a global manhunt by international assassins.

The Russos (Anthony and Joe) made their name with two small features, Welcome to Collinwood (2002) and You, Me, and Dupree (2006), which is quite awful if you ask me, as well as some TV efforts in great series like Community and Arrested Development. I haven’t seen the former of these two films. However, if I’d based my thoughts on the latter, I would have never thought that this duo would end up making three of the highest-grossing movies of all time, including the number one spot, with Avengers: Endgame. After completing four films with the MCU’s ring leader, Kevin Feige, they sought out different projects – other films that don’t dwell within the realms of the superhero chain. The first of these was the self-titled adaptation of Nico Walker’s 2018 novel, Cherry. Unfortunately, that film, which was targeted as a late Oscars “contender”, ended up being a total disaster.

So their latest picture, another adaptation of a modern novel, Mark Greaney’s The Gray Man, is basically a “scratch all that” situation. Instead of pushing for “possible” awards, The Russo’s were going for spectacle and blockbuster entertainment. Netflix wanted to go big with the franchise starters, hence last year’s mega-streaming blockbuster, the Rock-Reynolds-and-Gadot-led Red Notice. So, Netflix tapped the director duo to create another one for them. With a 200-hundred million dollar budget and an array of stars (Chris Evans, Ryan Gosling, and Ana de Armas, amongst others), The Gray Man makes its way onto theaters for a short while before hitting our television screens. The film looks and feels expensive in its lengthy action set-pieces and explosions. However, it doesn’t garner any popcorn movie glamor or enjoyment – another unsharpened franchise starter that one would watch once and forget instantly. The Gray Man begins with a short introduction to the lead character, Ryan Gosling’s Court Gentry (aka Sierra Six), who remains unnamed for the majority of the film, ten years before the film’s present day.

He’s being recruited by the Sierra team creator, Donald Fitzroy (Billy Bob Thornton), to join the team. Gentry joins because he has no other option; it’s either rot in jail for plenty of years or do the dirty work for that government special-ops, the Sierra agency. After working for them for a long time, they contract him to haunt one of his own, Sierra Four, who has information that might rupture their standing – leaking some of the agency’s darkest secrets. Because he now knows and holds that information, Six becomes the primary target and is hunted down by some of the best killers in the game from across the globe, including a former colleague, Lloyd Hansen (Chris Evans). With this “everybody hunts him down scenario”, it paves the way for The Russos to go all out, both in its array of locations (Croatia, Berlin, London, Mumbai, etc) and the craftiness of its various action set pieces.

However, what happens in The Gray Man is just a flat piece of popcorn entertainment. The multiple explosions, car chases, shootouts, and fist fights don’t add a jolt (or spark) of amusement. Things just happen, and there’s no reaction coming from the audience. The reasons for such an unamusement are plentiful, so it is hard to find a main culprit for this catastrophe. I know it isn’t the actors’ fault because they try to give their best with the poor material, particularly Ana de Armas, which is becoming one of the most magnetic screen presences working today. Even in the worst of films in her filmography, she’s still engaging to watch. And some even ham it up a bit because they are too into the role (Chris Evans’ villainous mustachioed fellow). It’s also great to see Julia Butters act again after her short yet great moments in Tarantino’s Once Upon a Time in Hollywood.

For the most part, one could say that the worst aspects of the film are its creaky editing, the shoddy directorial effort by The Russos, and its overall bland visual presentation – which is a crucial facet for blockbusters, especially the first installment of what may be a future franchise. The action set pieces are overly edited and poorly shot, to the point where you can’t see the fighting choreography or bathe in the tension and high intensity. In addition, thanks to the poor cinematography and editing in the fight scenes, the viewer doesn’t feel the physicality of the punches, kicks, tackles, and takedowns the characters do to each other. One of the reasons why John Wick excels is because of that. It lets the fight continue into a single transition, or long enough so that the audience can see each punch being thrown and feel it, as well.

And not only do you feel their bodies crunching hit after hit, the fights are crafty and savvy. This is unlike The Gray Man, which repeats plenty of its maneuvers and widgets (like the grenades that appear almost three times), causing the audience to get bored each time because it isn’t showing something creative or cunning. An excellent and well-shot action set piece garners reactions from the audience, whether it be a gasp or leaving you in sheer awe of what happened. Unfortunately, that doesn’t happen with any of this picture’s action sequences. Nevertheless, some of its fight scenes have potential, especially the hospital scene with Dhanush’s Avik San fighting with Gosling and de Armas’ characters. Yet, once again, the viewer doesn’t care because we don’t feel or see the pain inflicted on the characters and the physicality of the attacks being thrown. Like Michael Bay’s latest, Ambulance, this has plenty of drone shots during its car chases and location transitions, which tend to be annoying if used incorrectly and constantly – and that’s precisely what happens.

Its action set pieces, which are the primary vehicle for the feature, are disjointed, although not as incoherent as its narrative. The script leaves too many threads dangling around, never to be resolved. One of them is the “big bad” of it all, who is running the whole show. That might be purposeful, as it wants to start a possible franchise of sorts, but the movie’s antagonists keep mentioning it repeatedly, so it gets under your skin when they won’t reveal who it is. What’s the purpose of mentioning said villain multiple times if you’re only going to let it be known later on (if it ultimately receives a sequel). It doesn’t make the film any more interesting; it makes it far more dull and unengaging. By having Ryan Gosling in the lead role, you have plenty to work with. He’s a great actor who can deliver dramatic and comedic chops, depending on the material.

The Gray Man also tries to do a balancing act of adrenaline-fueled tense scenes and dramatic scenes for the purpose of connecting with the characters,  just to intercut them with poor comedic ones. One can’t even imagine how many jokes are thrown into the air, and none of them receive a laugh. Gosling does hold his own, and one or two quips or callbacks made me chuckle, but the script is so poor and unfunny that he can’t put the audience onto his charming spell to make it work. The film is just remarkably unremarkable, to the point where it tries too hard to make the audience engaged with what’s happening. Nevertheless, ultimately, nobody actually seems to care. The Gray Man is just expensive, glamour-less, and unsharp.