Movie Review: ‘The Garden Left Behind’ is important viewing despite the ending 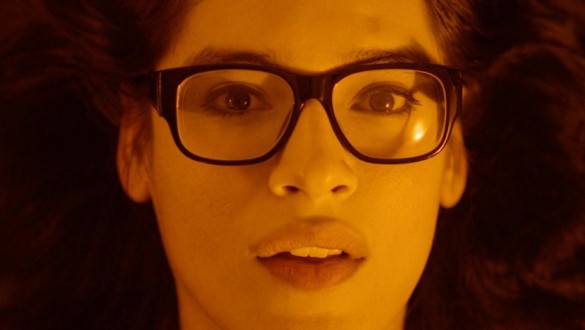 Synopsis: The story about a young Mexican trans woman and her grandmother who navigate life as undocumented immigrants in New York City.

Brazilian director Flavio Alves presents a harrowing, disturbing story in The Garden Left Behind. Seemingly portraying the difficult life of an anonymous trans woman, this movie can create an intense emotional reaction. The different spins that take place during its 88 minutes reflect the reality that minorities endure in life, especially in a hostile environment like the one that exists in the United States for those that dare to be different. Furthermore, in the era of Donald Trump, this movie acquires a more powerful message.

The Garden Left Behind follows the story of Tina (Carlie Guevara), a Mexican trans woman that lives undocumented in the United States. Thankfully, the movie doesn’t focus too much on her immigration status but on her path of transitioning and living her life, surrounded by her grandmother Eliana (Miriam Cruz, with a Spanish accent that is evidently not Mexican), her transgender girlfriends, and her emotionally abusive boyfriend Jason (Alex Kruz).
The first part of the movie is sweet and hopeful. Tina works as a driver – the camera following her through shifts and anonymous clients – saving all her money for her transitional surgery. She spends her free time with her friends and grandma, who has never really adapted to her life in New York City. Through sneaky comments, it is evident that she wants to go back to Mexico, although nostalgia is providing a distant idea of today’s reality.

Tina, however, is home, made evident by her broken Spanish and clean English. Through Tina, Flavio Alves presents an almost normal story of a historically abused character. She certainly has struggles and grievances, including an emotional reluctance from her boyfriend and casual bullying from local youths, but her resilience and positivity become her greatest strengths. We get to see her philosophy of life through therapy sessions mandated for her transition process.

Carlie Guevara, making her feature debut, is natural and charismatic as Tina. Although many of her reactions look too rehearsed, the life she brings to her role is strong enough to make us care for her. In the second part of the film, though, once the positivity erodes and she deals with complicated scenarios, her acting skills improve significantly.
Even though John Rotondo and Flavio Alves started working in the script in 2015, the story reflects the United States under the current administration in the White House. With a context that includes an aggressive agenda against immigrants – documented or undocumented –, a smear campaign against Mexico, a hostile environment for trans people, and police brutality against minorities, this story seems urgent. The fact that a Mexican trans woman – interpreted by a Latina trans woman – is the main character feels like a victory. Unfortunately, once the movie is aware of these facts, it starts losing its power, and Tina’s story gets lost in the way.

When cops attack a trans woman, Tina and her friends get involved in the “Trans Lives Matter” movement. In addition, the story becomes interested in Chris (Anthony Abdo), a bodega man that develops a fixation with Tina. Seemingly harmless, Chris evolves into a critical element in the movie’s tone shift, having a frustrating at best and maddening at worst, character development. His actions feel more like a plot device than an accurate representation of a real person.

At the beginning, the movie seems to exist in service of the unique story of a Mexican trans woman in New York going through her process of womanhood and acceptance. In its second half, by contrast, the movie neglects this objective and focuses on portraying the harrowing trans experience. This way, the story becomes a lesson for the spectators and non-trans people, while Tina turns into a martyr for the movie’s agenda.

Consequently, the ending feels overwhelming and completely unexpected. Curiously, Alves chooses this conclusion when moments before Tina is presented with a new and different challenge. It feels unfair that this new possibility is denied by the director’s new path. Nevertheless, this random decision reflects the chaos and uncertainty of life. Still, considering the emotional investment we had developed before, the director’s decision feels moralistic.

The Garden Left Behind is a worthy entry in the rather scarce filmography about the lives of trans people. With a sensitive touch, this movie addresses issues of identity, immigration, and acceptance. However, towards the end, the story has a transformation that fails its careful character study. Although its ending is realistic, it is also extremely disappointing.