Classic Film Review: Back in Time – A Retrospective on ‘Back to the Future’ 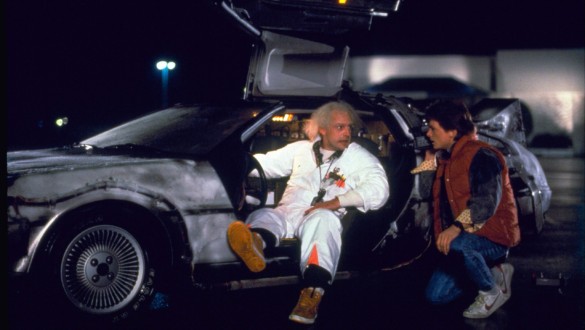 There are many aspects required to make a good film: the acting, the production, and the editing, to name only a few. However, the film has to start with a script, and if the writing is not strong, it will be hard to create a strong movie with that foundation. Back to the Future (1985), written by director Robert Zemeckis as well as Bob Gale, is one of the best examples of screenwriting in film history. Whether it is the ability to explain time-travel, the numerous references hidden throughout, or even just an outstanding balance of tones, let’s look at how Back to the Future still works 35 years later.

What is perhaps the most rewarding aspect of Back to the Future is how natural the set-up is. So much information is given to the audience; however, it never feels forced or placed purely for vital information to be known later on in the story. This is done not only once but several times throughout the movie, and it is cleverly done by having the film set in two completely different eras.

Looking back at the start, when Marty (Michael J. Fox) is in 1985, we are given a background on his family and the city that he lives in, Hill Valley, California. As audience members, we learn about how his mum and dad first met, how the town’s clock tower became faulty, and the idea that a black man, Goldie Wilson, became mayor of the city. When Marty is taken to the year 1955, all the information we found out becomes vital to the story. From the small details of a younger Goldie being told to run for mayor (something that would not occur to him as a black man in the 1950s) to the clock tower being struck by lightning the exact day that Marty needs that amount of power to time-travel back to 1985.

The amount of effort put into writing a tight screenplay mattered for this film, and even beyond that. Back to the Future was written as a one-off film with no plans to adapt it into a series. However, with pressing demands from Hollywood to replicate the magic of the first film for more money, Gale and Zemeckis decided to stay in charge to try and preserve the movie for themselves. They managed to create a film that works perfectly as itself but also gives them the freedom and creativity to expand and build the rest of the series as they did, with many people loving the entire trilogy.

A significant issue with the time-travel function throughout film history is being able to explain the logistics of it in a way that not only makes sense logically but also in a way that is easy for the audience to understand. Many films have different ways of going about this, with the hit series Doctor Who and the big box-office success Avengers: Endgame both taking their own approach to the subject matter. Whether the version of Back to the Future’s time-travel makes scientific sense is potentially lacking, it does not entirely matter here as the explanation is so well done and is a major impact on the narrative of the film.

The time-travel aspect of Back to the Future is simple: when you go back in time, you can shape and change that past as much as you want. However, in doing so, you end up changing the Future and therefore create a parallel timeline. The dilemma that Marty places upon himself when he interferes with the meeting of his mother and father in 1955, causing the new Future not to have them as a couple and therefore erasing Marty from existence, is what gives Back to the Future its story.

A Balance of Tones

Back to the Future is a film of many different genres. While it is mainly a science fiction film focusing on the implications of time-travel, other subplots bring in action, romance, comedy, and drama. It may be a time-travel story, but it is also a coming-of-age tale that highlights the importance of family and yet done in a light-hearted manner despite the dark subject matter of potentially being erased from existence.

Let’s once again take the moment wherein 1955, Goldie Wilson hears the idea that he is going to be mayor. The film here highlights the severe issue of racism back in the 1950s by having Wilson’s current manager say that it will never happen due to the color of his skin. However, we leave that scene, feeling optimistic about the Future for Wilson, as we have already seen in the film that he makes it as mayor. It gives a positive outlook to what could have otherwise been an overly dark tone in an otherwise fun and exciting movie, making it feel out of place.

To conclude, there is so much work that has to go on to create a strong screenplay. There may be even more pressure on science fiction films, where screenwriters have to explain the logistics of mechanics that do not work in the real world, such as time-travel. Back to the Future is known as one of the greatest films of all time, and after 35 years, the film still feels as fresh and relevant as it did back in 1985. With many people debating on whether this classic should be updated, my question has always been whether there could be a fresh take that comes close to this classic.