Movie Review: ‘The Gallows Act II’ scares and sucks less than the first one 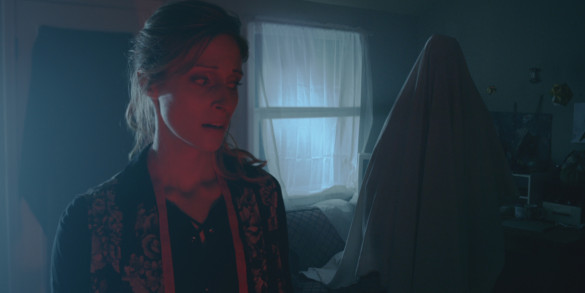 Synopsis: When Auna Rue transfers to a prestigious new acting school, she encounters a malevolent spirit after participating in a viral challenge.

Well, the good news is that The Gallows Act II is better than its predecessor, but only barely. The Gallows was one of my least favorite movies of 2015. I found it narratively derivative and visually messy with a lot of mediocre acting. Look, there are some genuinely fantastic found-footage horror films out there, but it’s a subgenre that is overflowing of crap. And it’s understandable why. It’s an aesthetic style that is pretty cheap to produce. A production company could fund a few found footage films for what it might cost to shoot just one conventionally-made movie; profit is the name of the game. Of course, if made cleverly and inventively, a found footage flick can wind up quite useful. Unfortunately, the majority are pretty shoddy and unexceptional, which is why found footage does not get much respect, even within the horror community. The term is practically a punchline among some. And films like The Gallows have a lot to do with that poor reputation. Thankfully, The Gallows Act II manages to be marginally superior to the first “act,” but it’s still far from great.

The writing-directing duo of Travis Cluff and Chris Lofing returned for this latest installment. To shake things up, they boldly forwent their found-footage style. For the most part, The Gallows Act II is filmed more traditionally. Keeping true to its predecessor, this sequel’s cold open begins with some “self-filmed” material—teens videoing themselves getting into supernatural shenanigans, as teens are wont to do. But then the tape experiences digital interference, and we cut to a standard establishing shot of a house. From here on, most of the movie is shot “normally.” This reminds me of when [REC] 3: Genesis made the artistic choice to abandon the first two installments style, but it seems more natural than it happens with a second installment rather than a third entry. Occasionally, though, The Gallows Act II still utilizes motivated recording sources when it’s called for.

One of those motivated sources is the webcam of our protagonist. Ema Horvath plays Auna Rue, an adolescent who yearns for viral fame. She’s a vlogger with hundreds of subscribers, but hardly any friends in real life. But hey, to paraphrase my life coach Jill Roberts from Scream 4: who needs friends when you can have fans? Horvath is a highlight here. She has great charisma and a lot of charm, and she’s the only thing holding the picture together. Her Auna Rue (a somewhat silly name that manages to stick, so I’ll give Cluff and Lofing credit there) is an outsider at a new school, which has a well-respected theatre program—because of course she also wants to be an actor. The manner with which this film depicts drama classes is… interesting. It makes you wonder if the directors ever took one. Because, having taken several myself, I can assure you that acting students rehearse more than just the same one friggin monologue all semester. When reciting hers, Horvath purposefully takes charge of a pitfall that many fledgling actors walk into unintentionally. While monologuing, Auna Rue dons an “actor voice,” this faux-heightened form of enunciating immediately reads as I’M ACTING. There’s a way of doing it properly, and then there’s the way most untrained young actors do it. It’s expressly prevalent when performing classical and period pieces.

Which totally makes sense here. Because her solo is from *bum bum bum* “The Gallows,” a cursed play about… a guy who gets executed? I dunno? What draws Auna Rue (good lord, that name) to “The Gallows” is not its plot but its infamy—and the social media videos associated with it. The Charlie Challenge involves teens reading passages from the script aloud on camera as weird stuff happens around them. Think of it as Gen Z’s version of invoking Bloody Mary or Candyman. The titular Charlie is Charlie Grimille, an actor who died during a high school production of the play when the titular gallows malfunctioned. (This is why we have unions.) So now Charlie’s ghost haunts teenagers who utter the words from the play that killed him, naturally. And it’s not exactly a secret? Charlie has a following akin to Slenderman. And, in search of her own following, Auna Rue does the challenge repeatedly—even with mounting evidence that Charlie’s spirit is absolutely real and rather malicious. Her hubris blinds her to the apparent danger she’s brought upon herself; instead of fright, she’s filled with exhilaration. What starts with your basic inanimate objects whipping across the room steadily escalates to the point of no return for Auna Rue. Sounds cool, but I assure you Horvath’s performance continues to be the only exciting thing as the story builds because it’s certainly not the jump scares.

Seriously. There are approximately 832 attempted jump scares in this 99-minute movie. A couple of them are successful, but the other 830 are done so poorly and unnecessary that the efforts become laughable. Jump scares get a bad rap, but they are not inherently a bad thing. However, an overreliance on them signals a lack of narrative confidence. Likewise, so is a reusing a plot device repeatedly—namely showing your audience something horrific (like the sudden, gruesome death of one of the characters) only for there to be a hard cut revealing that it wasn’t real at all, merely a vision. It’s lame and grows rather annoying after the third or fourth one.

But you know what, I actually would’ve been okay with the filmmakers doing it one last time if it had been done to erase the godawful ending. The conclusion of the film completely undercuts everything that came before it—not to mention it is super disrespectful to its protagonist. It’s a mean-spirited finale that doesn’t feel justified in any meaningful way and plays out like a big middle finger to the audience and Auna Rue herself. I honestly felt somewhat bad for Ema Horvath. She deserves better. And frankly, so does the audience. To put your viewers through an hour and a half of hackneyed horror tropes and technical misfires only to dole out a real dud of an ending is just straight-up rude—Justice for Ema Horvath.