Movie Review: The Fate of the Furious offers more family and stimulating action 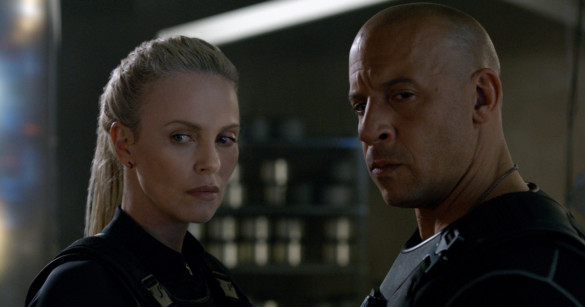 Synopsis: When a mysterious woman seduces Dom into the world of terrorism and a betrayal of those closest to him, the crew face trials that will test them as never before.

The Fast and Furious franchise has revved into high gear the last three films and The Fate of the Furious only continues to accelerate. Instead of dropping cars out of a plane, Fate introduces a car stampede and a submarine as part of the action. At this point, the only place they can go to next is space, right?

The entire gang is back in Fate of the Furious, only this time things change when Dom Toretto (Vin Diesel) goes “rogue” for unknown reasons. Cipher (Charlize Theron) has something close to Toretto’s chest that forces him to do her bidding. This leads to an intriguing conflict that results in more action and furthers the franchise’s notions of family.

For all of the crazy antics The Fast and Furious films have implored lately, its ideas of family really do resonate. The Fate of the Furious is not quite as emotionally resonate as Furious 7 – and it’s doubtful the series can reach that peak again – but the MacGuffin of this film does force Dom to really wrestle with why family matters to him. It also helps give Fate a dramatic through-line that allows you to root for both Toretto and his team, even if they are at odds with one another here.

The real charm of Fate though is the dynamic of Deckard (Jason Statham) and Hobbs (Dwayne Johnson), who are hysterical in their scenes together. Their machismo banter is brazenly satisfying. Statham and Johnson have a clear chemistry that is palpable on screen. Additionally, Deckard’s inclusion to the team – while a bit off-putting given his actions previously in the franchise – leads to a riveting climax where he becomes involved with Dom’s MacGuffin.

While there’s enough charm to go around between Statham and Johnson, let’s not forget Vin Diesel, who give one of his best performances in this franchise. Not only does he have to work as an antagonist and protagonist simultaneously, but he has to carry the dramatic weight of this film, and he succeeds wonderfully. At times Dom barks back at Cipher in relation to threats on his family, and Diesel’s presence is heavily felt in those moments. Michelle Rodriguez has a smaller role in Fate, but she does a fine job. Tryese Gibson and Ludacris also give familiar, but still satisfying, performances as well. Charlize Theron is unfortunately a waste here. Her performance is fine, but the script doesn’t give her anything fun to do. She more or less snaps orders at Dom and that’s it. There are a few moments where she lets loose – especially when giving her motives – that are compelling. But on the whole, she’s rendered a mundane villain.

Fate of the Furious is a mostly well-balanced and fun action movie, however there are moments in the script that panders too much to the previous films, and more specifically, its ideas of family. There are a few moments that feel forced and unnecessary in that regard, as if every corner of this film and every character has to fall into this rabbit hole of family. I like how the franchise is rooted in something familial, but at times it does go too far.

The action is also quite great. The opening race in Cuba helps establish the roots of this franchise and it’s fun to watch. The New York set piece is a bit CGI overload and its stampede elements felt a bit dull, but the third act more than makes up for that. There is a submarine car chase in this film. I repeat – a submarine chases and shoots missiles after cars. That sequence will go down as one of the most absurd action scenes every put on film, and it’s amazing in every way.

On the whole, The Fate of the Furious is exactly what you think it’s going to be. By now, you either like these movies or you don’t. Fate may not be the best of the bunch, but it’s far from the worst. It’s crazy, it’s fun and it’s family. Nothing more, nothing less.

Hear our podcast review on Episode 217: