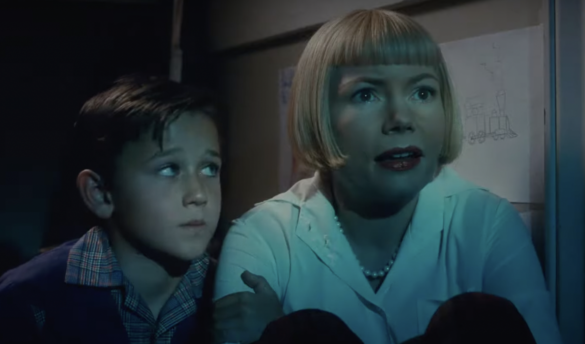 Synopsis: Growing up in post-World War II era Arizona, young Sammy Fabelman aspires to become a filmmaker as he reaches adolescence, but soon discovers a shattering family secret and explores how the power of films can help him see the truth.

There have been a glut of semi-autobiographical films by prominent filmmakers over the last few years. Usually they are made by directors who have a style of course, but lack a certain coherence of vision throughout every project they dream up or undertake. You can see their bells and whistles, their favorite tricks, they work with a tight crew or a solid rotating behind the scenes cast, but none of them is Steven Spielberg. None of them have that presence on screen.

When you sit down to let the darkness of the theater take hold, to envelop you in the light of the screen, you know from the first frame, it’s a Spielberg picture. His standby techniques and his favorite compositions are familiar, but are no less astounding when they make their appearance. The Fabelmans has every Spielbergian trick to it, but it’s clear that, even with the trademarks, this is different territory for Spielberg as an artist.

It’s true that if one parses Spielberg’s films they find short bursts of autobiographical clues, feelings, nods, and whispers. He’s not an open book, but we know him like we know the rest of our idols. Often in a Spielberg film we’re given excellent moments of tension, beautiful beats of a moment landing, bombast, adventure, drama, tension, yes, but what The Fabelmans delivers is a moment of silence. There’s something to be said for a director to nod to us like he hears us. He nods to us like he heard our friend parrot an opinion about Spielberg not understanding real emotion. He nods to us like he heard the guy coming out of the theater claiming the film’s score is emotionally manipulative. He revels in showing us this silence, in not cutting from the discomfort and letting it drag out on screen. It’s not as clean or clear as his more populous films. The Fabelmans lives in a gray area, in the minutiae with no stoic heroes, no obvious villains. It has no strong score telling us who is who.

Most of the music in the film is diegetic. Mitzi Fabelman (Michelle Williams) is a skilled pianist and plays often throughout the film when there isn’t period appropriate pop music or those spare bits of John Williams’ brilliance. In one of the longest sequences, Mitzi plays late at night as Burt (Paul Dano) looks on and Sammy (Gabriel LaBelle) edits the footage of the family camping trip in his room. We see the reverence Burt and Sammy have for Mitzi, Sammy for her charms and lust for life and Burt for her intricate and precise skill. While Burt sinks deeper into his reverence, Sammy notices something in the background of his raw footage. He sees a secret he isn’t supposed to see. Spielberg lingers within this simultaneous moment. He bathes us in the full spectrum of the character’s emotional journey without a hint of dialogue or an easy answer, but what we see is Sammy’s heartbreak and we see the sheen of Burt’s awe slip as his mind wanders from Mitzi’s form to what Mitzi’s going through. The not incongruous music doesn’t push us to these emotional catharses, the actors, alongsideMichael Kahn and Sarah Broshar’s stellar editing shows us the depth of feeling.

There are several sequences like that where we’re shown how much Sammy is detached from everything else when he’s filming, where we’re shown how much he’s missing with a camera in front of his face. He detaches himself in the moment, but when he gets to his editing suite, he puts his emotional state into the visual metaphor of his work. It’s the shots of Sammy as he projects his finished product that are the best composed and the most imbued with the emotion he struggles to express. Cinematographer Janusz Kaminski builds these scenes of light and shadow across Sammy’s face with a delicate touch. Kaminski’s movement and Spielberg’s composition make these shots of Sammy and his audience the emotional core of the film. In spite of the failure Sammy has with communicating his emotions, his films speak volumes to the people he needs them to; whether they want to acknowledge it or not. It’s all done in the dark, but it’s so beautifully clear.

While the showier role is Mitzi, there’s something to marvel at Paul Dano’s Burt. It’s clear Spielberg wanted us not to blame Burt, not to force Burt into a corner either of pity or hatred. Burt is a man who says too much about the things he loves. He’s a passionate man who works, really tackles things. Never has Dano been better at his meek persona, his man bursting with ideas, who keeps it in reserve, who feels trod upon and forgotten. He doesn’t chew scenery, but seethes underneath it, lingers about it, and takes it all with a gentleness and benign nature that is utterly remarkable.

The Fablemans is a remarkable film overall, but it leaves a lot of loose threads. There seems to be a want to get all of it down, all of it in there at once. Focus is pulled, our eyeballs set on one thread, are bounced to the next. It’s possible that Spielberg told Tony Kushner when they sat down to write that he’s only going to do this once. So, then, they tried to get everything, while also having movies within movies and a coda that, while very fun, is a bit of hokum. In a movie this beautifully made, though, it’s easy to forget what you don’t like and marvel at the mastery of what you do like.

That’s Spielberg’s oeuvre in a nutshell. He’s made stinkers and masterpieces and some that are just a good time at the movies. He’s a director that appeals to the movie lover in all of us because in the midst of the bombast and action, he can find that heartstring to tug. He sees us in our seats and he wants us to feel something. With The Fabelmans he’s allowing us to feel all of him, warts and all. The warts are small and the feelings are magnificent. It may not be a masterpiece, but The Fabelmans is a beautiful work of art.