Movie Review: ‘The Disaster Artist’ crafts a win from a naaaht 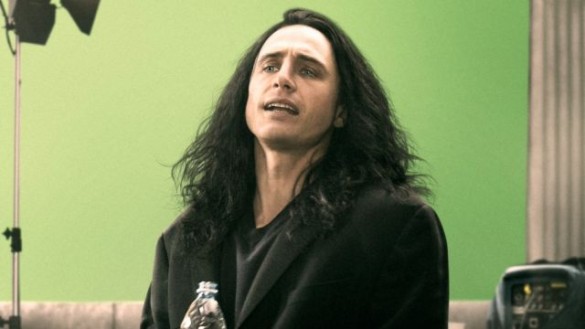 Synopsis: When Greg Sestero, an aspiring film actor, meets the weird and mysterious Tommy Wiseau in an acting class, they form a unique friendship and travel to Hollywood to make their dreams come true.

Don’t judge a person by their vampiric and three-quarters stoned cover, indeed, for they know how to make life advantageous. With the ability to turn a disheveled look into additional personal mystique and proof of incompetence – a 2003 “gem” of acting-directing-writing called The Room – into an enduring achievement, it’s befuddling that we have yet to pronounce Tommy Wiseau’s last name as “wise-au.” Sure, “weez-au” is what the diction teachers go by, but it fails to acknowledge the man’s niche form of genius.

Not quite like its shell, too, is A24’s movie-about-Wiseau’s movie, which despite the title isn’t much of a dive into the subject. That’s no reason to tear yourself apart, either, as what The Disaster Artist is – the formation of said subject’s finest creation – is just as compelling, not to mention loaded with veritable laughs and startlingly heartfelt. It’s the Christmas for, and of, comedy.

The story begins in a San Francisco acting class where Greg Sestero (Dave Franco) sees his acting dreams receive a beatdown from the coach. Judging from the stifled frustration and slouching as he returns to his seat, it isn’t the first time this happened. It might be the last, though, after he witnessed (and presumably heard Dave Porter’s operatic score) a long-locked cast-mate named Tommy Wiseau (James Franco) went all-out – groaning, climbing, chair-tossing and air-thrusting – in a rendition of A “NOLA” Werewolf in SF, minding not the snickers and perplexed eyes. The sheer confidence, tight-lippedness about his background and determination in pursuing a spot among celluloid stars – Greg continually finds a reason to befriend Tommy, and soon enough the duo decide to road-trip it to Hollywood to find success. It’s no spoiler that both guys, like their real counterparts, found it, even if their method is being involved in the “Citizen Kane of Bad Movies” rather than a critical darling or an award-winner.

“Nobody respect my vision,” Tommy wailed at one point. Well, the awards circuit ought to once The Disaster Artist lands in theaters. Utterly committed is the elder Franco’s work here, as actor and director, though more so being the former where unpredictability gets to thrive. The performance, defined by a brand of sense interpretable as near-delirium, is a masterfully tuned one; it lives up to the built-in weirdness that the marketing emphasizes yet ultimately gives more voice to the narrative’s more embraceable elements – a relationship’s phases and expectations-versus-reality – that writers Scott Neustadter and Michael H. Weber are adept explorers of. As a result, those foreign to the “Oh, hai” can still enjoy the film as a genre entry well-aware that the ha-ha fruits grew up high are worth a pick. And for those who have known the cult classic by heart? There is room here to see it as a dream made true, however unrefined, more than exclusively a subpar production that avoided oblivion.

At times, The Disaster Artist does chip immersion when it hosts an array of faces known for their fame, comedic oeuvre or appearances in fares co-starring James Franco. “Chip” is the keyword as the effect of “film one moment, SNL-esque playground” the next can be overlooked; the “Hey, that’s Judd Apatow” (or Alison Brie, Paul Scheer, Hannibal Burress, Seth Rogen, Zac Efron and so on) moment hoards the spotlight only milliseconds before it is rightfully evicted by James’ acting, a most enthusiastic turn from his younger brother Dave, d.o.p. Brandon Trost’s amiable faux-documentary style, or all of the above. The film’s finest reels emerge when the latter happens in which the Francos’ actually brotherly chemistry sparks, equally palpable are the elation when their characters find common ground and the sears in times not so. Consequently, nothing is gimmicky or shortcut-taking when one Franco casts another, just a nifty tribute to the real Greg and Tommy’s nearly blood-brothers dynamic and the heart of the 2013 memoir that the film adapted from.

After The Big Sick and Lady Bird, here is another remarkable tutorial for life delivered through the most outstanding of personalities and the most compact of films. And if they can court the big splashes which cinema desires on a more regular basis than tentpoles, let’s see more of youse. They hero.

Hear our podcast review on Episode 251.