Movie Review: ‘The Big Sick’ is heartwarming and hilarious 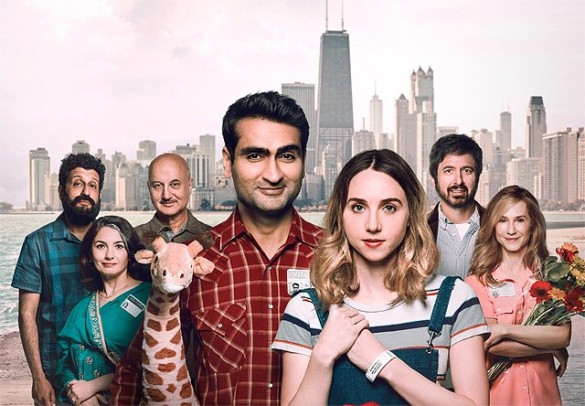 Synopsis: A couple deals with their cultural differences as their relationship grows.

Laden with gluttonous lashings of acerbic wit, this spell-casting romcom co-written by Kumail Nanjiani and Emily V. Gordon hits all the right notes. Mostly. A true account of their fledgling relationship spanning two hours and a near-fatal illness, The Big Sick earns every right to halt Hidden Figures’ reign as feel-good movie of 2017. A first turn behind the camera since 2005’s The Baxter for Michael Showalter (better known for his thespian work in Wet Hot American Summer), the drama is efficiently steered through waters that could so easily capsize into ripe melodrama; the heavy lifting here, though, is in the writing. Like the indestructible screenplays of Paddy Chayefsky (Network, The Hospital), it’s not a great leap to suggest even the salacious sensibilities of Michael Bay couldn’t harm this tale.

Kumail (Nanjiani) spends evenings delivering stand-up routines in a seedy Chicago comedy club, a passion subsidized by nocturnal Uber fares. A chance meeting with Emily (Zoe Kazan) during one of these performances sparks an immediate romance, despite the early reservations of graduate student Emily. It’s in these moments; these minutiae, that The Big Sick works its magic. Contrasted with beautifully observed dinner sequences Kumail shares with his devout parents, in which his mother, Sharmeen (Zenobia Shroff), conspires to introduce Kumail to prospective brides, there develops an air of truthfulness I can’t say I can recently recall. It may even be that, were it not based on actual events, I’d dismiss the eventual narrative arc as utterly unnecessary. The sudden onset of a supposedly innocuous lung infection renders Emily comatose, hastening a series of fractious interactions with Emily’s parents, Beth and Terry (Holly Hunter and Ray Romano). Racial prejudice is given the comic floor in some of these moments, as indeed are those with Kumail’s parents, a particular line referencing 9/11 with sardonic nous drawing fits of stifled laughter from the audience. That we’ve spent long enough in the company of Emily and Kumail to recognize the absurdity of their parents’ inclination yet retain an appreciation for it, is quite brilliant. We are in no doubt of whose side we’re on, but everyone’s sympathetic.

It can’t be understated just how many laughs Nanjiani and Gordon have skillfully weaved into the script without lessening the drama. Going into the film we know the real events can’t have played out amidst such incessant levity, yet here they are, as naturally woven into the plot as anything else. I did feel, coming out of the screening, that the playful tone did challenge my expectations less as the film wore on (a minor final-scene misstep eliciting a reticent groan), but such is the writing that I’d have forgiven next to pretty much anything. These two families, afflicted by sickness, infidelity and pride, are simply a pleasure with whom to spend an evening.

Brian Burgoyne’s cinematography is both unobtrusive and patient, detaching itself from what, for all the world, feels an ardent retelling. It’s tempting to consider his work here passive, given that so very little of the story is told by the camera, but our distance is the actors’ intimacy.

The Big Sick is an easy sell. The screening I attended flew in the face of any notion of a target demographic, the laughs endearing us all to a love story with the warmest of hearts. A complex examination of its characters, all of whom are afforded the time to earn their sometimes partisan, sometimes ambivalent views, will likely reveal more with repeat viewings. And it’s from DVD shelves that I expect further viewing will catapult this relative box office smash to modern indie classic.