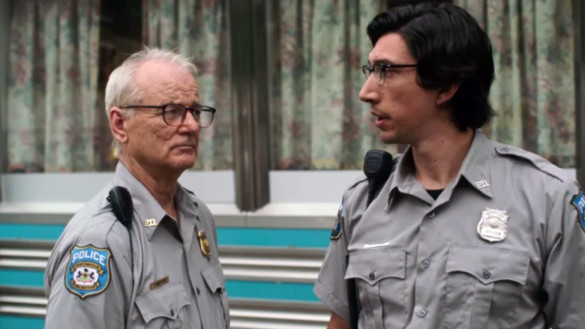 Synopsis: The peaceful town of Centerville finds itself battling a zombie horde as the dead start rising from their graves.

The trailer for Jim Jarmusch’s new film The Dead Don’t Die immediately put a smile on my face. The zombie sub-genre has always been one of interest for me ever since my first viewing of George Romero’s Day of The Dead and it was the 1990 remake of Romero’s Night of The Living Dead that truly solidified the undead as one my favorite horror antagonists. Since then whenever a new Z-film is set for release I can’t help but feel the same excitement I did back then. And so I waited patiently for the release of what I could only imagine would be a new zombie classic, after all the film stars Bill Murray who also had an unforgettable cameo in Ruben Fleischer’s 2009 hit Zombieland. Murray has experience with the undead. However, after a long wait, I finally caught the film and then spent some time meditating on my thoughts, because it neither met my expectations in the sense of composition or enjoyment. Unfortunately, in the end, The Dead Don’t Die didn’t make for a great viewing experience, not as a zombie film or a comedy.

Jarmusch has a particular way with pacing. My first experience with his craft was Ghost Dog: The Way of the Samurai a good film with a very steady storyline. His characters spend a lot of time in empty spaces with little dialogue and even less action. I went into The Dead Don’t Die knowing this and expecting a bit of a slow burn. However, where he did a good job in Ghost Dog of filling these voids with meaningful character mannerisms and a well-timed soundtrack, we instead feel with The Dead Don’t Die every single second of silence and they seem to stretch on and on quite often. I can’t help but feel this is intentional to suck the viewer into this dismal and foreboding world, which it can, but it also makes the film feel very stale. Too much of it done without substance loses the audience, there were many times I found myself drifting off into my own thoughts while nothing really played out on the screen. On top of this, there is very little action, again somewhat expected, and the humor is very dull so you end up with not much of a reward for your patience in sitting through these stretched out moments. It is spattered with some good laughs but they are few and far between. I really wanted to like the film and kept waiting for it to pick up and give my inner 10-year old that dose of terror he’d been waiting for but none ever came. It was quite truthfully an agonizing film to stay engaged with.

Of course, the film, like Zombieland, is also meant to be a comedy so I wasn’t expecting the same gloom and doom as Romero’s classics which can leave a bad taste in your mouth after you’ve watched survivors barricaded up for hours only to eventually be savagely mauled by an undead horde. But I was hoping for some good laughs mixed in with some slight commentary on the plight of the human condition. Essentially something that feels meaningful which is what most zombie films have always done for me whether it be Shaun of the Dead or Train to Busan. Z-films have a way of pulling you into a world where all the trivial things that we normally hold value to now have very little meaning at all and have you question what to do with those thoughts. What is surviving and what is the point of it in a world where there may be no other people? What makes the people we keep company with special to us? The Dead Don’t Die did not do this for me at all. Now, this doesn’t mean that it does not succeed as a film, but it didn’t succeed in my expectations of the genre. It is fair to say however that it brought something new to the genre and maybe it will act as a catalyst to expanding on the types of stories Z-films typically are used to tell. In keeping with comparing The Dead Don’t Die with other Z-films what it does attempt to do, as did some of Romero’s films, is act as a device to provide commentary on societal issues such as our obsession with consumerism or the current political climate. In some ways, this is done well but it is at the expense of telling a compelling story and providing the audience with an enjoyable cinematic experience.

The Dead Don’t Die was a tough film to rate. With actors like Adam Driver, Steve Buscemi, Danny Glover and numerous other recognizable names attached to it, it was easy to set very high expectations. But the film suffers from too many dead spots (no pun intended), flat humor and for a zombie film just not enough zombie activity. It feels lifeless and lacks energy and momentum. The undead “ghouls” are not really felt throughout the film and instead exist as background noise while the cast spends much of their time with tedious dialogue that too often feels pointless and trivial. And if that is not enough it ends on a very sour note. Without giving anything away the final act feels cheap and senseless and truly an unfair conclusion for the audience. Unfortunately, I would not recommend this film but will also add the caveat that if you do decide to catch it and you are a fan of the typical zombie film genre, be sure to set aside your expectations before you dive in.