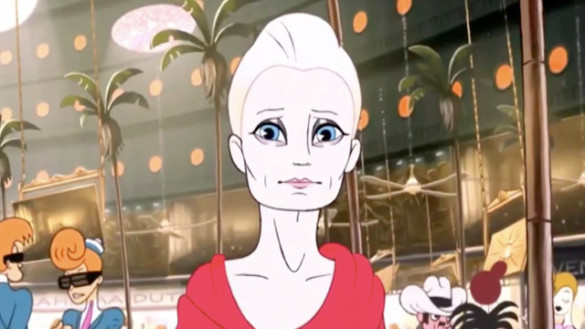 Synopsis: An aging, out-of-work actress accepts one last job, though the consequences of her decision affect her in ways she didn’t consider.

DIRECTION
Ari Folman’s The Congress is certainly one of the most ambitious films we’ve seen this year and tackles some big ideas. The first act of the film crucially sets up the characters, in which Robin Wright plays a version of herself. The last two acts are animated and the animation is gorgeous, trippy and even haunting at times. The hallucinatory sequences fit the story well and thrust us into the mindset of these characters, as well as the themes that Folman is exploring. While the film does work as a Hollywood satire, Folman had bigger ideas in mind, takes a risk and really goes for it. It doesn’t 100% stick the landing, but it’s solid through most of it.

SCRIPT
Robin Wright plays a version of herself where her acting career has tailed off due to her insecurity and fear, thus putting her agent in a position to offer her something of a lifetime. A major Hollywood studio has offered to use her likeness via computer CGI to re-create a young Robin Wright that they could use in any movie at any time in the future. The catch? She can’t act anymore, anywhere, ever. And she gets a bunch of money. From there the film jumps 20 years in the future where chemical drugs take precedent and leave you in an animated world where you can be and look like any person you want to be. The film explores ideas of beauty and youth that is extremely captivating as well as themes on chemical dependence and technology. The story itself does fizzle a little and the script mostly leans on it’s themes toward the end of the film but they never become pretentious or uninteresting.

PERFORMANCES
Robin Wright may be well known for The Princess Bride and Forest Gump, but she’s still a working actress and still relevant. Despite the play on her acting career, she’s fantastic in the film, which is a vital piece in it’s potency. While some have criticized the live-action scenes, they work for me and added a layer that plays out critically at the end of the movie. Her performance is also important because the supporting roles in this film, such as Harvey Keitel, Paul Giamatti and John Hamm are pretty small. Good, but small.

SCORE
Max Richter score is gorgeous here. He relies heavily on the strings but adds some incredible poignancy to the emotional scenes of the film and it never felt forced. The music itself lingers on some beautiful melodies that seem to flow fluidly with Robin Wright’s character. There’s also some great soundtrack pieces that fit perfectly with the themes presented in certain scenes that was brilliantly handled.

FINAL THOUGHTS
The Congress isn’t for everyone but the animation is beautiful and the ideas that this film raises is provocative. Robin Wright carries the film well and overall, this is a film we’d recommend.