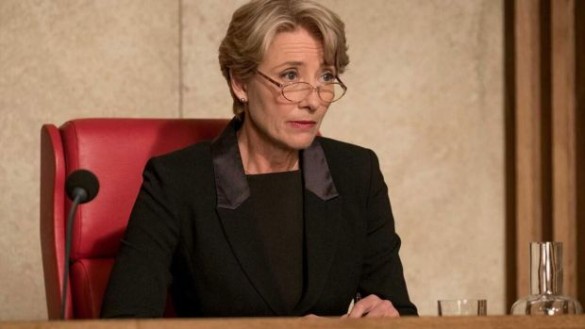 Synopsis: As her marriage crumbles, a judge must decide a case involving a teenage boy who is refusing a blood transfusion on religious principle.

Richard Eyre’s The Children Act dazzles with pristine performances but fizzles out before the film even picks up steam. Fiona Maye, portrayed effortlessly by Emma Thompson, is a judge in the High Court of London who oversees cases of family law which are both ethically sensitive and magnets for the media. She must exhibit compassion for the cases brought before her, even at the risk of angering one side of the issue or the other. The immense toll on her affects every aspect of Maye’s life, such as her damaged relationship with her husband, Jack (Stanley Tucci). Her constant awareness of the cases on which she works causes her to deprioritize her marriage, of which she has not been an active participant in years. When a case involving Adam (Fionn Whitehead), an extremely intelligent boy whose religious beliefs forbid him from accepting a blood transfusion, comes to her attention, Maye grapples with a decision that could change everything.

Based on Ian McEwan’s novel of the same name, The Children Act forces audiences to look deep within themselves with regards to the crucial choices Fiona Maye faces. The ethical questions brought forth are deeply engaging and thoughtful. However, the film lingers on these questions only slightly. The main interest of The Children Act seems to be how a woman who has never had children of her own, exists in a fractured marriage, and has little room in her life for love, presides over life-and-death decisions that have the potential to destroy families. How Maye deals with these consequences when they begin to affect her personal life is deeply underdeveloped. The questions that arise in the aftermath of her decision on Adam’s case are never fully explained or realized. The second half of the film loses the intensity of the first half and the interest of the viewer begins to wane. Unfortunately, this is due to the lack of exposition with regards to the main character, Fiona Maye. The audience can never quite get a peek behind her carefully crafted visage. Perhaps this is the filmmaker’s intention all along; to forbid the audience entrance into the brilliant mind of Fiona and witness the chess match she must play in order to reach her verdicts.

This hidden agenda complicates her relationship with Adam and it becomes difficult to understand her motivation as she steps out of character and commits questionable acts. All in all, The Children Act is a well-crafted, deeply moving film. The performance of Emma Thompson holds this film together as it constantly tries to fall apart. Enjoyable and thought-provoking, The Children Act toys with your emotions, but never enough to make you care too much about the main character. Perhaps this is the point; to keep the audience at a cold distance, mimicking the barrier of law that Fiona Maye uses to protect herself from her crucial decisions. This creates an interesting environment for the viewer; depending on which side of the argument with which your side, your feelings regarding Maye will develop differently. The opinions you form dictate your reactions to her actions, which makes The Children Act a slightly interesting film, or does it?