Movie Review: ‘The Boy Who Harnessed the Wind’ is an impressive debut from Chiwetel Ejiofor 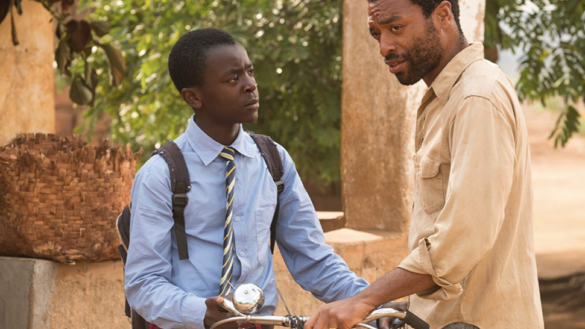 Synopsis: A boy in Malawi helps his village by building a wind turbine after reading about them in a library book.

“The wind blows wherever it pleases. You hear its sound, but you cannot tell where it comes from or where it is going. So it is with everyone born of the Spirit.” John 3:8

The wind takes on spiritual connotations in many different cultures. It is fleeting, ethereal, and unknowable. It is that spiritual presence that moves throughout the newly-released Netflix film The Boy Who Harnessed the Wind.

This is the feature film directorial debut for Chiwetel Ejiofor, an actor who has given us a litany of powerful roles throughout his career. He brings the same combination of gravitas and tenderness to his work as writer, director, and actor in this film as he has in all those great previous roles.

The film is adapted from the book of the same name by William Kamkwamba and Bryan Mealer. William Kamkwamba is the real-life “boy who harnessed the wind” and he is played by Maxwell Simba in the film. Ejiofor plays his father, Trywell. Trywell is married to Agnes (Aissa Maiga) and they also have a daughter, Annie (Lily Banda). The family lives in Malawi, and we meet them in the throes of familial tragedy. Trywell’s father, John (Felix Lemburo), has just died. He leaves behind an inheritance of farming land that has been in their family for years. However, he decides to leave the land to Trywell’s brother, Jeremiah (Robert Agengo).

Ejiofor does a masterful job of merging multiple storylines into a cohesive narrative. While the story of the Kamkwamba family is always the foundation of the narrative, themes of the importance of education, the corruption of government, and the transcendence of nature all play their part as well. For a first-time director, Ejiofor displays great deft at juggling all these narrative elements at once.

The basic point of tension comes from the fact that the Kamkwamba land is rendered nearly worthless by governmental overreach. Jeremiah decides to sell his portion of their father’s land to cash in and get needed food. Trywell feels that the government’s price is still too low, but the decision is basically rendered moot by the fact that Jeremiah’s land held trees that kept the floods of Mozambique at bay. With the trees ripped down, nothing stops the flood waters from decimating the Kamkwamba’s farmland. After the rains are done, the dry season ensues. With their farmland ruined, the family is left without food. This is when William must step up.

The familial interplay is maybe the most fascinating aspect of the film. There’s the drama that comes from John’s decision to give the land to Jeremiah and the influence that has on Trywell. That father/son dynamic is given even more dramatic power as we learn more about the relationship between Trywell and William. It was Trywell who spent more than most fathers around him on the education of his children. He provided a way for William to learn and develop his unique mind. But as the food begins to run out, so does the money. William is left to his own devices to learn the skills he must, and it is fascinating to see how that affects his relationship to his father.

This is a feel-good film, yes, but it is also much more than that. There are painful moments along with the joyful ones. As I said before, there are many themes present here for the viewer to process. This film has layers, and each one is worthwile.

One scene that affected me personally was one where Trywell, Agnes, and William are speaking with the school headmaster after the dry season has decimated the food stores across the community. Agnes talked about how she and Trywell had vowed not to be like their ancestors who prayed for rain. She and her husband wanted to face their problems with a modern approach. But now, after all their striving, their approach had brought them to their lowest point. And this is where the film’s spiritual elements kick into high gear.

At the beginning of the film, a strange group of masked figures appear. Some of them make other appearances throughout the film. I was never quite sure of who they were, although it is clear that they are of some cultural and spiritual significance to the local community. In my research, I found this interview with Ejiofor from NPR.org where he explains the importance of the group and the lengths to which he had to go to film them. Here’s an excerpt:

“They’re called the Gule Wamkulu, and they are the kind of spiritual center of Malawian cultural life. They’re a secret society of dancers, and they turn up at different cultural events, which can be funerals, which can be weddings, a chief’s inauguration…when I went to Malawi, I was really trying to find the Gule…they were very difficult to find, to pin down — I mean, they’re a secret society after all. And so that became a kind of frustrating process for me, because I did want them to be in the film, but I didn’t want to put people in costume, you know, sort of as dancers pretending to be the Gule Wamkulu kind of thing. I wanted the actual Gule to be in the film…it was only kind of late in our pre-production period that we were sort of finally invited to a village to see the Gule perform. And it was one of the most magical afternoons of my life. And so, you know, the Gule agreed to be in the film.”

Even without knowing their full significance, you feel the film going for a spiritual tone. Just by the film’s title, you get a small hint of the ethereal nature of the film. That is why I opened this review the way I did. The first quote I reference is the final typography that appears on screen at the end of the film. As much as Trywell and Agnes might have wanted, the spiritual realm cannot be fully disregarded. They live off the land and the wind and weather. There are things outside their control. Yet, it is William who realizes that engaging with and using that great power is their way to salvation.

While the film’s real-life story and even the title may give you a sense of how the film ends, this is one film where knowing the ending doesn’t detract from the experience. That, again, is a testament to the way Ejiofor is able to infuse more than just a feel-good narrative out of this story. This is easily the best 2019 release I’ve seen so far, and it is definitely worth streaming on Netflix.