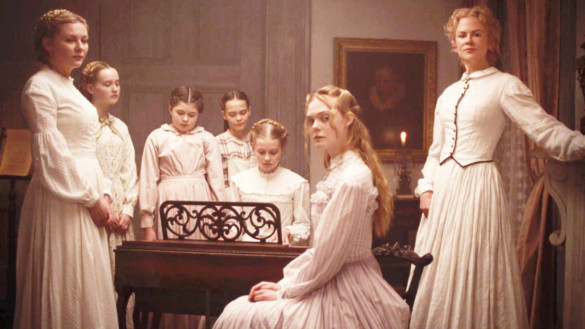 Synopsis: At a girls’ school in Virginia during the Civil War, where the young women have been sheltered from the outside world, a wounded Union soldier is taken in. Soon, the house is taken over with sexual tension, rivalries, and an unexpected turn of events.

The Beguiled takes place at a girls only school in Virginia during the Civil War. When the girls’ peaceful existence is disturbed by the unwanted arrival of a wounded Yankee soldier, the women must quickly decide whether they try and save him or leave him for dead. Choosing to follow in the steps of God, the woman assist the soldier and allow him to regain his strength at their school. But he is not there long before the women and the soldier’s sexual tensions begin to rise, leading to bad blood among them.

The Beguiled relies heavily on its subtext, focusing on how the film is edited, as well as how the characters interact in order to deliver a deeper meaning. The plot of the movie consistently remains as basic as possible in order for Coppola to fully immerse her audience into the psyche of the characters. Which isn’t a bad thing, it is incredibly refreshing to see something so nuanced in this modern age of film. The film is adapted from the novel of the same name and also technically a remake of the Clint Eastwood film from 1971. However Coppola’s approach is told through the lens of the women in the school versus the wounded soldier. Coppola and her team masterfully recreate the subject matter for an incredibly indulgent viewing.

Besides its deep metaphorical subtext, the visual style is actually the movie’s biggest strength. Not only is this project shot on film but it actually is shown in a different aspect ratio than most films, with the black bars on the sides versus the top. This just slaps us over the head with even more subtext because the movie has now metaphorically and literally trapped its character into a physical space. The Yankee soldier feels imprisoned by these women in the third act of the movie and the framing is a visual representation of that. Despite its framing the film overall is just incredibly pleasing to look at. The sets are recreated stunningly, all of the costumes are accurate and drop dead gorgeous and the lighting of the exterior sets is immaculate. Coppola has been in the directors chair for quite sometime but this project is easily her greatest achievement.

The film is slow moving but that does not hinder the overall enjoyment. The runtime and pacing is built around the script and story, making it all the more effective. This effect is sold even further through the fantastic ensemble cast. Nicole Kidman, Colin Farrell, frequent Coppola collaborator Kirsten Dunst, Elle Fanning and many other up and coming actresses, each performance in the movie is brilliant. Not only are everyone’s accents spot on but also their mannerisms and inflections. From Farrell’s sleek and charming performance that quickly switches to intimidating and ferocious, to Kidman’s relaxed and powerful performance, each actor delivers new career bests.

The Beguiled is an incredibly slow burn that focuses and relies heavily on its subtext. However, catered with an abrasive visual approach and a brilliant ensemble cast this does not hinder the film. Serving as Coppola’s best directing job yet The Beguiled is a summer movie that does not quite feel like a summer movie. If you are seeking something small scale and not as epic or grand as every other movie this summer, this film is totally worth your time.