Movie Review (SXSW): ‘Islands’ is a Quiet Story about the Uncertainty of Solitude 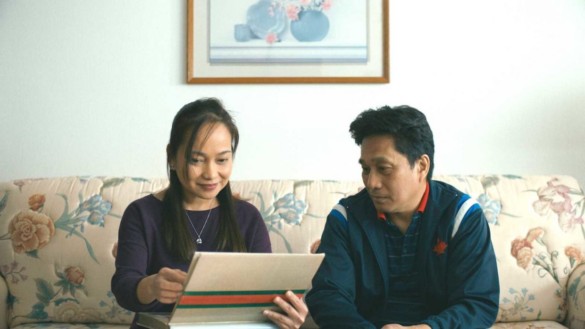 Synopsis: Joshua, a shy middle-aged Filipino immigrant, has lived in the comfort of his parents’ home his entire life. As their health declines he longs for a partner, terrified of being alone after they pass.

Martin Edralin has his feature directorial debut with Islands, a sensible movie about the painful process of growing up (even if the main character is a middle-aged man) and the confrontation with death and solitude. Although set in the United States, the film is focused on a Filipino family with its dialogue mostly spoken in that language (something that will hopefully happen more often now that Minari has opened the door for the presentation of this kind of American reality).

While the latter focuses on the American dream, the former addresses another sympathetic and humanistic topic: the difficult process of seeing your parents grow old and realizing that the safety net they provide will soon be gone forever. How do you deal with the imminent solitude that awaits you?

We experience this emotional journey through the eyes of Joshua (Rogelio Balagtas), a deeply shy man that lives in the comfort of his parents’ house, without any real interaction with anyone outside of his family. Although loving and peaceful, it is evident that his parents are old and weary, now practically in the last portion of their lives.

Joshua works as a janitor in the local university and leads a lonely life, constantly rejecting the timid approaches of peers and having limited interactions with others through dance lessons he attends with his mom. His personal reflections allow us to understand that this timidity is something that pains him and that he longs for someone to be with him. The frustration of wanting something terribly and not being able to do anything about it because of mental stress is palpable in Balagtas’s performance.

Unfortunately, his fears come to life when his mother unexpectedly dies. Now, Joshua must deal with his depression and the needs of his sick and old father. While others would be hesitant to modify their lives, Joshua does not think about it twice and decides to quit his job so he can take care of his dad, therefore losing the only connection he had with the outside world.

Edralin allows us to feel Joshua’s despair and solitude through a discreet and taciturn filmmaking. There is no excitement in Joshua’s life, and consequently, there is no music or embellishment in the narration. Everything is quiet and unremarkable. Every now and then, though, music can be heard, providing the only relief that sporadically colors Joshua’s life.

Everything gradually changes when Marisol (Sheila Lotuaco) appears. A cousin that came to America to attend his mother’s funeral, Marisol represents the first female figure that has exciting interactions with Joshua, which gradually intensifies once she moves in with father and son to take care of the elder. The tone and mood of the film change, just as the man’s countenance becomes optimistic. With her presence, it seems as if he were an adolescent just discovering the tribulations, norms, and expectations of social life, finally woken up by this new excitement.

Islands does not escape from awkward moments of longing and realizations that may seem too evident to those with more practiced societal interactions, but that in the reality of the movie, seem like discoveries. In a world that keeps proving that the establishment of meaningful connections with strangers is harder and harder, Joshua’s story can feel disconcerting and empathetic (and more considering that we have not had social interactions for more than a year). Still, the story offers an optimistic view on the tribulations of opening and accepting the uncertainty of life.