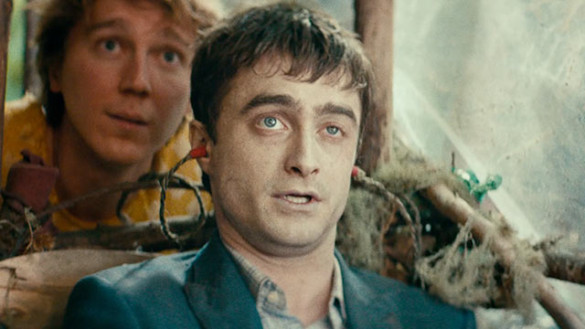 Synopsis: A hopeless man stranded in the wilderness befriends a dead body and together they go on a surreal journey to get home.

While the above quote from the film is specifically in regards to Jurassic Park, it still couldn’t be truer. In a world dominated by “sequelitis”, Swiss Army Man emerges as the unique outlier, a truly original film unlike any other. Though something we have all come to expect, original doesn’t always mean good, and Swiss Army Man will have its equal share of supporters and detractors. For me personally, first time directors Daniels (specifically Dan Kwan and Daniel Scheinert) have crafted one of the most beautiful films of the year, and yes, it involves lots of flatulence and masturbation jokes.

Dubbed as the “farting corpse movie” after its premiere, Swiss Army Man tells the adventurous tale of Hank (Paul Dano), stranded on a deserted island ready to hang himself. Only he stops himself, when he notices a body wash up on shore (Daniel Radcliffe). Even though he is dead, this body has the ability to do all sorts of things; he can fart, turn into a jet ski using said farts, spit out fresh drinking water, and eventually learn to talk. He becomes Hank’s human Swiss army knife (get it?). Let’s just get it out of the way and talk about Daniel Radcliffe.

Daniel Radcliffe gives one of the year’s best supporting performances, one that will probably go ignored come awards season unfortunately. Manny asks many questions, about life, death, love, and masturbation, and as silly as it all is (and trust me, it is), it’s all surprisingly profound and authentic. It’s a balance that on paper should not work, and somehow it does. “If my best friend hides his farts from me then what else is he hiding from me, and why does that make me feel so alone?” I dare you to find any falsity in that. And credit must also go to the Daniels’s script; it is anything but subtle, but it makes up for its obviousness by being so incredibly honest and true. Sometimes things need to be blunt in order to prove a harsh point, hence is the case with Swiss Army Man, and it’s well earned.

With Radcliffe’s performance said, coupled with the Daniels’s bizarre script and direction, it should be known for how moving and profound this movie is, it doesn’t forget that humor is equally as important in fulfilling life. In other words, this movie is hilarious. And as hilarious and profound Radcliffe’s performance is, many of the film’s best laughs are due to Paul Dano’s Hank, whose awkward insecurity makes for the most perfect responses to Manny’s bizarre questions. At the same time, Hank is arguably the one with the naïve outlook on life, one who has much to learn; this leads to the film’s most profound nature.

For a movie about a man who has no idea how to live, it takes teaching a dead man the value and triumphs of life to show yourself what you’ve been missing out on. In the end, just like we keep so many of our inner most feelings bottled up inside (yes, farts can equate to symbolism), we must learn to overcome our insecurity and confront the demons that hold us back, and that’s how we grow up. There’s a lot of well-earned ambiguity in the film’s spectacular climax, and the outcome strikes that perfect balance between the profound and the bizarre. And watching Manny actually grow as a character (a dead character, mind you) is key to this film’s success.

I can’t speak for everyone when I say that Swiss Army Man is one of my favorite films of 2016, some of you may even hate it (reports during its premiere stated that almost half of the audience walked out before the film had reached its midpoint). If you were one of those people, perhaps you can learn a little something from Manny. I just hope you aren’t dead inside.