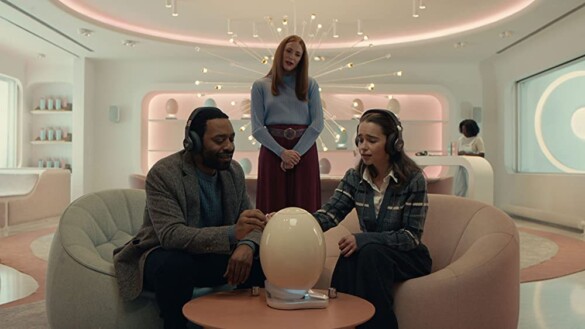 Synopsis: A couple in futuristic New York use technology such as detachable artificial wombs and pods to start their family.

Personally, sci-fi premises grab my attention more than others. Cinema is supposed to transport people into another world, even if it’s one heavily based on our own. In The Pod Generation, the viewers are taken to the XXII century, where literally everything has become technological, artificial, or simply unnatural. From something as mundane as making breakfast and working in a desk job to going outside to breathe in the fresh air, everything must have some sort of advanced technology involved. Obviously, that also includes having a baby. Right?

Rachel (Emilia Clarke) and Alvy (Chiwetel Ejiofor) are a couple at that stage of life where becoming a family starts to be a priority. However, while Alvy is a firm believer in following nature’s course and supports a natural procedure, Rachel is more driven towards an artificial conception through a highly capable, detachable womb/pod that looks like a very fancy, futuristic egg. Writer-director Sophie Barthes explores human evolution, our increasingly worrying dependence on technology, and what kind of impact that might have on our culture.

In a somewhat unsurprising narrative, the thematic study is both the best and worst of The Pod Generation. Barthes is able to create enough scenarios to share meaningful messages about the topics above, especially how the emotional connection between humans can never be replaced by state-of-the-art science. In addition to that, the growing reliance on technology to do anything for us is already negatively affecting our (lazy) lifestyles, as well as people’s lack of care for Mother Nature. Finally, educating children is filled with dangerous shortcuts to avoid the frustrating yet necessary parts of the process of raising a kid.

Unfortunately, The Pod Generation doesn’t get much beyond the generic teachings with these messages. Besides some tonal problems with switching between the satirical, comedic parallelisms and the more dramatic, intimate relationship issues, the admittedly intriguing premise doesn’t reach its full potential due to the superficial, repetitive takes on the main themes. By constantly trying to prove yet another point that viewers had already understood, Barthes forgets precisely about the so-crucial genuine bond between the viewers and the protagonists, even making the whole film feel overlong.

That said, The Pod Generation contains remarkable world-building and fantastic production design (Clement Price-Thomas) that got me invested in such a believable, futuristic environment. I found myself looking around the screen often, fully immersed in the movie’s gorgeous aesthetics. Evgueni Galperine and Sasha Galperine’s score also stands out, particularly in moments where the characters enter a meditative state of mind, usually surrounded by nature, whether real or manufactured. Clarke and Ejiofor also contribute with excellent performances.

Somewhere out there in a parallel reality, there’s a slightly more cohesive script filled with inspirational dialogue scenes that fully takes advantage of these outstanding technical attributes. It’s just not quite this one.