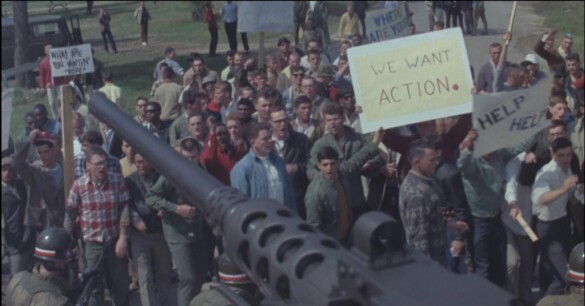 Synopsis: A poetic and furious reflection on a nation’s citizens and institutions to the rebellions of the late 1960s. This artful, riveting documentary consists entirely of archival footage that was shot by the United States military or appeared on broadcast television.

“[…] dream riots, young men acting out the fantasy of conquest and invasion”. This is what you get when you create a place like RIotsville, USA, a model town in which armed forces were trained to handle riots in the late 1960s. With methods of responding to domestic civil disorder including military training, tear gas production, and violence; it is no surprise that a film of this nature is proving to be relevant to the events that have taken place over the past few years.

Presented in a way that is unpolished, with the editing style incredibly simple and text boxes being used to piece the clips together, this documentary is more focused on the content itself rather than telling it in an artistic manner. This is a format that works for Riotsville, USA because the content they have is shocking. The wide shot of the model town of Riotsville paired with clips of fake news reports and riots puts into perspective just how much money and resources must have gone into the training scheme in comparison to preventing the riots from occurring in the first place.

The documentary is comprehensive in covering a full range of topics related to riots, racism, and the political landscape in the late 1960s. It does this by focusing on stories that the viewer may not know, adding to their knowledge of the subject matter. Director Sierra Pettengill is aware that the audience knows about the events at Chicago, so instead focuses on the GOP reception that was being held in Florida around that time and comparing the political landscape of that state, gathering footage of protests, speakers and riots that occurred during that short time. Not only did this reception and time have a lot of footage to pull, but it also made for a great comparison between the events that were taking place and the media’s reports.

One aspect of the documentary that I particularly appreciated was how Pettengill took archival footage from both a public broadcasting service and from a commercial broadcasting service, comparing how both handled the subject matter of looting and racism within the United States. Most of the training footage at Riotsville had Black men center of recreating the riots, and this contrasts the publicized move to have half of the volunteering riot training consisting of Black men who believed that they would not need to prepare for Black people initiating the attacks. What was said out in the public and what was occurring in these commercialised training videos suggests two different attitudes, and it is clear this attitude has still not changed in 2022.

For a documentary that covers many topics and collects a lot of archival footage, there was room for some of it to be edited out. This would have made the documentary more concise and stayed focused, helping to push the message clearer. There were some clips in particular, such as a live performance of the entire song ‘Burn, Baby, Burn’ by artist Jimmy Collier, that added little to the documentary and instead interrupted the pacing of the film. Instead of showcasing the performance or giving no context to the song, it would have been nice to cut the piece to a specific chorus or verse and have visuals playing over it to give the viewer a sense of the importance of the song but not to take the audience away completely.

Riotsville, USA is a strong documentary that reflects on the attitudes of the country in the late 1960s and shows how little has changed to this day. The film does not need to be flashy or abstract in the editing style as there is plenty to keep you engaged purely on the information and archival footage. Perhaps in the next 50 years, we might finally be able to look back and see some progress made, but we can certainly hope that is the case.