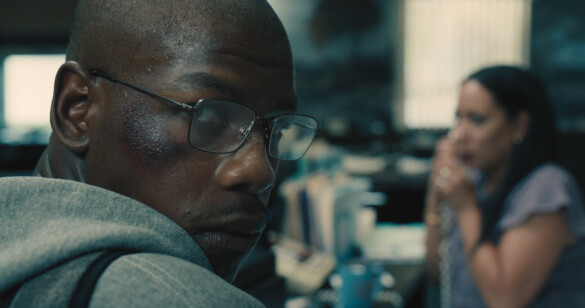 Synopsis: Living in a cheap motel in Atlanta and separated from his wife and child, former U.S. Marine veteran Brian Easley is desperate. Driven to the brink by forces beyond his control, the soft-spoken, kind man decides to rob a bank and hold hostages with a bomb. As police, media, and family members descend on the bank and Brian, it becomes clear he’s not after money – he wants to tell his story and have what is rightfully his, even if it costs him his life.

When 892 begins, the first thing that is shown is a bit of text confirming that this is a true story. This set-up is one that is vital to the heart of the story, as the events that took place only occurred in 2017 and the film uses Sundance as a platform to tell Brian’s story, something he wanted everyone to know about. Considering how recent the incident is, I was surprised that I hadn’t heard of it before clicking play on this film.

The opening scene takes its time to develop the relationship between Brian Easley and his young daughter. This is essential not only to the plot of the film but in helping to establish the character of Brian. There is some dialogue between the two characters that suggests the worst about Brian’s situation, mentioning that he found himself arrested by the police earlier in the day. The audience is told from the start and throughout the film to face a moral dilemma with Brian’s character, and that is what ends up making 892 more than just a standard thriller.

When the bank scene begins, a scene that would then be the central plot point and location for the rest of the film, it is easy to get a sense of familiarity with how it will play out. This is not the first film to focus on a bomb threat at the bank and it will not be the last, and yet this first bank scene still manages to hold a lot of tension. Part of that is down to the opening scene, but it is also because of John Boyega, who plays Brian. It would be easy for an actor to mess up a role such as Brian and to lose the heart of the story, but Boyega is able to find a balance between the trauma his character has gone through and the intensity of pulling off a hostage situation.

For most of the film, the audience is in the bank with Brian and two staff members who are held hostage, played by Nicole Beharie and Selenis Leyva. Both of their performances are strong alongside Boyega and help sell the situation, creating tension but also trying to assist a man who is in clear need of help. However, the film does break away to show the outside world from time to time to help flesh out the situation. In particular, Michael Kenneth Williams gives a fantastic performance being the middle ground of Brian and the police and this role will only add to his legacy. While the film is at its strongest when it is in the bank, the story benefits from cutting away and showing other perspectives outside of that one location.

892 works as a film primarily because of Brian’s reason for holding the bank hostage in real life. The film not only touches on the issues of racism in America, in which Boyega’s Brian is aware that his skin color impacts how the police will handle the hostage situation, but Brian is not wanting to cause any harm to the bank employees he has held hostage. He openly states that he has no intention of causing harm to them and he does not want their money, but rather using the hostage situation to get a public platform on the news so that he can expose the way certain organisations have treated him.

The film does suffer from being predictable at times and playing the same notes as other thrillers do. It is easy to predict where the story is going to go and, because of that, the tension does start to fade at certain moments. However, it is easy to forgive a predictable story when the film is based on a true story, particularly when the story is as heart-breaking as this one is. Instead of focusing on the predictable plot points of the film itself, I found myself captivated by the emotional dilemmas throughout the story and angry at the message presented.

Some people may struggle to get behind Brian and understand his motives for going so far, and I do understand why that is the case. If anything, I wish the film took some time to show the impact that war had on him and highlighted his mental health issues, such as PTSD. However, this film is one of the toughest watches I have seen in a long time, and I appreciate director and writer Abi Damaris Corbin for creating a challenging film that hits hard from start to finish. It is not a film that I will rush to watch again, but it is one that I feel everyone should check out.