Movie Review: (Sundance 2022) ‘After Yang’ is a Gorgeous and Serene Take on Grief and Love with a Sci-Fi Twist 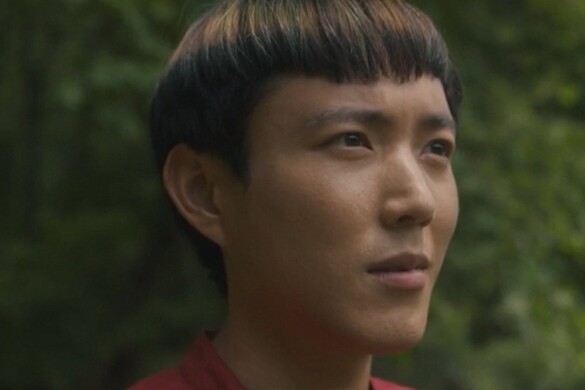 Synopsis: When Yang – a lifelike, artificially intelligent android that Jake and Kyra buy as a companion for their adopted daughter – abruptly stops functioning, Jake just wants him repaired quickly and cheaply. But having purchased Yang “certified refurbished” from a now-defunct store, he’s led first to a conspiracy theorist and then a technology museum curator, who discovers that Yang was actually recording memories. Jake’s quest eventually becomes one of existential introspection and contemplating his own life,, as it passes him by.

After Yang is a sci-fi tale like none other. Sure, it is a film that is focused on the plot of androids, and it is clear that the world building vastly improves on the technology that we have in the current age. However, the technology is only present to help explore themes such as grief, memories, and the passage of time, and that is what director-writer Kogonada is interested in. The screenplay is what shines in this film as the audience is given time to not only connect with the family that the story follows, but to also go on the emotional journey that they go on  trying to repair Yang.

The film breaks a lot of the stereotypical tropes when it comes to being a sci-fi film, and this is outside of just the themes of the screenplay. For starters, the film clocks in at only 96 minutes, which does not give the film a lot of time to focus on the world building or how the technology came to be. Additionally, the lead character Jake (played by Colin Farrell) has an occupation which has nothing to do with the future of technology, but instead focuses on old-fashioned techniques of brewing tea and selling tea leaves. This contrast grounds the film in a reality that we are familiar with, but also speaks about the importance of history and not being consumed by technology in the future.

On top of those two points, the aesthetic of After Yang is very different to what is expected from a sci-fi film. The color palette is very muted, with the gorgeous cinematography bringing a sense of stillness and serenity to the world. The cinematography in the film is also highlighted through a change of ratios, which is done to communicate whether each sequence is in the moment, a video call, or one of Yang’s memories. Unlike other attempts from films in the past that try to alter the aspect ratio and end up being distracting, its use in After Yang helps show the audience quickly what is happening and immerses them further into this stunning world.

Every actor here plays their role well and understands the calm tones that the film is going for. It is refreshing to see Colin Farrell take on a performance like this that is subdued and toned down, especially compared to his recent work; such as in Guy Ritchie’s The Gentlemen (2019). Jodie Turner-Smith once again proves that she is one to be taken seriously after playing Jake’s wife Kyra, a role that could not be more different to her breakout role in 2019’s Queen & Slim. Malea Emma Tjandrawidjaja is fantastic in her feature film debut, and the writing of her character Mika feels authentic to her age and the curiosity a child would have in a world like this, especially given her circumstances.

There is cultural importance when it comes to a film like this, and that is apparent from the opening shots when the family is introduced. There is representation of not only a biracial relationship between Kyra and Jake, but they have also chosen to adopt a Chinese daughter, Mika. The story of having Yang be a part of the family as a way to help their daughter still learn about her country of origin but to also have someone she can connect with is beautiful and highlights the importance of knowing your past and embracing different cultures.

After Yang is the best film to have been shown at the 2022 Sundance Film Festival. A film that is beautiful to watch and so easy to get immersed in, Kogonada has created something that I will want to revisit again and again. For a film that is short and keeps a soft tone throughout, there is certainly a lot to think about when it comes to a finish.