Movie Review: ‘Summerland’ unfortunately sabotages itself in the end 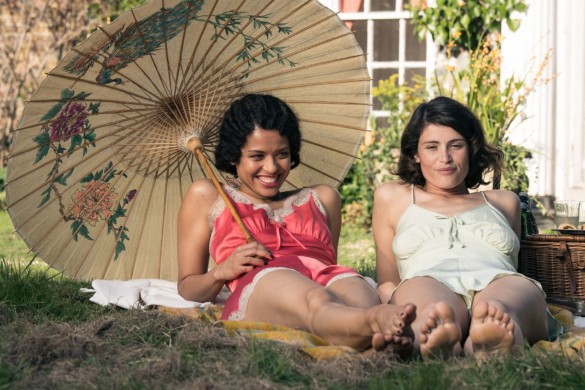 Synopsis: During World War II, an Englishwoman (Gemma Arterton) opens her heart to an evacuee after initially resolving to be rid of him in this moving journey of womanhood, love and friendship.

Shocking reveals in movies are risky, to say the least. If done well, the audience will not only have that “oh my god” moment, but it will both open up the film to be a larger world and make the movie immediately rewatchable. When it works, a la Planet of the Apes or The Sixth Sense, it can transform a movie from really good to great. But I am sorry to say, this is the exception rather than the rule. Most times, when writers and directors go for that shocking reveal, it either falls flat or is, frankly, laughable. And this brings us to Summerland.

I won’t go into detail regarding the aforementioned third act reveal, as to not “ruin” it for you. In addition, that means we can focus on some of the positives, instead. The writer and director of Summerland, Jessica Swale is more known as a playwright, and the style of the film lends itself to her choices. The decision to begin the film far into the future and layer flashbacks feels very much like a stage play, and in a good way. The lead, Alice Lamb (Gemma Arterton) is a writer who lives on her own, and is seemingly content with this. However, through said flashbacks, we get hints of her past romance with Vera (Gugu Mbatha-Raw). This is paired with a plot wherein Alice must take care of a young evacuee, Frank (Lucas Bond) from London during World War II.

There will be no negative opinions of Arterton here, who has seemed to recently make a living out of British stories of WWII (seriously, watch Their Finest, it’s great). She uplifts some pretty standard material to a performance worth watching. Her romance with Vera is mostly effective, if consistently kept at a distance. Mbatha-Raw is wonderful, as always, but, due to third act necessities, she is barely in the film. Her time on Summerland is relegated to little more than an extended cameo. It is almost as if they don’t know what they have here. Arterton and Mbatha-Raw in a lesbian love story set during a world war? This should be an absolute slam dunk. But because of the split focus of the timelines, we never feel truly drawn into this world.

Honestly, it really is a shame about that third act. Does the first hour of the movie set the world on fire? No, but it is a story, that although we have seen it before, still feels comfortable and warm. Of course we know that Alice will eventually warm to Frank, because the beats of the ornery parental figure are well worn. But you can also tell that Arterton is really enjoying the opportunity to play against type here. And from a script perspective, the transformation of that relationship is understated and realistic.  By the time that change happens, it never feels like a leap and it is easy to root for.

There are also some nice visual touches. During the repeated discussion of the myth of Summerland (which Alice is researching for a thesis), the work from cinematographer Laurie Rose is subtly  beautiful. Watching the clouds slowly transform into a castle and back again feels, well, magical. Additionally, the staging of bombed areas of London is perfectly dour and terrifying from a child’s point of view. The use of shadow and the light from fire does a terrific job of masking the fact that we never truly see the spectacle of these attacks. Instead, Swale allows us to experience this through her actors, especially Arterton.

So, for most of this review, it has been mainly positive. Can the reveal be that bad? Yes, and then some. Again, without giving anything away, It is not only irretrievably stupid, but it also undercuts both of Alice’s relationships built up throughout the movie. So, even though the first hour never approaches great, it was a serviceable, approachable, warm film. After the third act lands with a thud, it poisons that first hour to the point that the whole thing, at best, just feels like a waste.