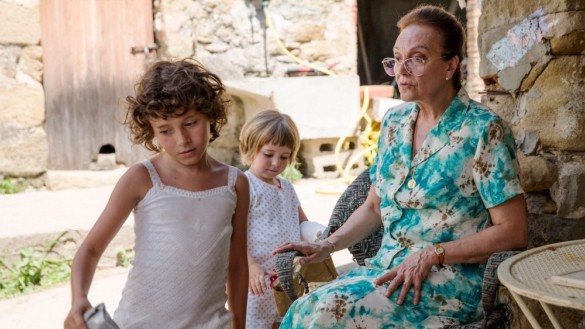 Synopsis: After her mother’s death, six-year-old Frida is sent to her uncle’s family to live with them in the countryside. But Frida finds it hard to forget her mother and adapt to her new life.

Widely decorated in its native Catalonia and winner of Best First Feature at last year’s Berlin Film Festival, Summer 1993 recounts the experiences during the acutely observed titular period of first-time director Carla Simón. Shot largely in the same locales as the real events, the film tells the story of Frida (Laia Artigas), a young girl sent to live with her aunt and uncle following the loss of her mother to AIDS. Tragically common in the lives of many Spanish children in the late 80s and early 90s, the film captures this broader concern with microcosmic focus. Comprised of small, cumulative moments, Summer 1993 builds its sandcastle almost imperceptibly, grain by grain, and is all the more powerful for it.

Opening as Frida prepares to move from her Barcelona home to the countryside, there’s an air of ‘the after’ about the events of Summer 1993. As the wider film takes place in the wake of her mother’s death, a later scene sees Frida graze her knee while playing, or rather it doesn’t. We don’t actually see Frida fall; we see the immediate aftermath. In a later scene, Frida’s younger cousin Anna (Paula Robles) falls into a nearby river. We don’t, however, witness the fall itself, merely Anna’s father Esteve (David Verdaguer) scooping her from the water. So, there is a tangible element of ‘post’ about Summer 1993; it is a film where reactions to and coping with significant moments are valued more than the moments themselves. It is with a crash, then, that when the film finally catches up with events onscreen in its final moments that it captures them with absolute immediacy: an outpouring of inarticulate emotion that speaks volumes. En route, we accompany Frida climbing trees; gazing absently from the car; having blood taken; taking baths. Small moments. Cumulative moments.

While themes of parental responsibility loom large over proceedings, the story is absolutely Frida’s to tell. Indeed, the weight of the narrative is borne almost solely on her shoulders by Santiago Racaj’s diminutive camerawork. We observe at eye-level with Frida and Anna, the adults’ frame often only in full frame when seated. This approach recalls other child’s-eye films such as the recent The Florida Project, or, perhaps more appropriately, Víctor Erice’s The Spirit of the Beehive. Indeed, there is something of the young Ana Torrent beneath the stubborn veneer of Artigas’ Frida, though her Frankenstein’s monster is less defined.

Summer 1993 is unassuming, deft and, ultimately, honest. And the impression that confronting those sun-drenched months was cathartic for Simón is unavoidable. A shortage of narrative conflict has, for some, served as justification for criticism, but embellishing the personal with the impersonal surely couldn’t have pierced Frida’s fragile defences. Like the family dramas of Hirokazu Kore-eda, Summer 1993 builds its conflict from within, appealing to the thoughts and feelings of its players to prize us in. In this respect and many others it succeeds.