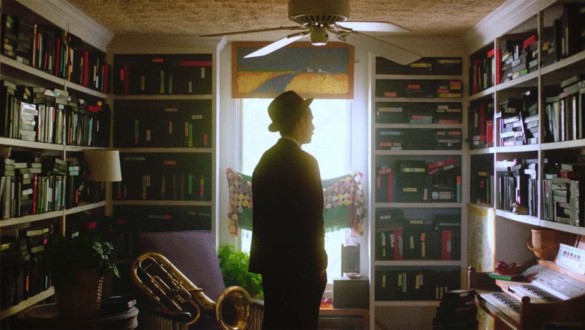 Synopsis: In a future where the government records dreams and taxes them, a dream auditor gets caught up in the dreams of an aging eccentric.

For the first hour of this film, I was simply mesmerized. I was already set in declaring this film a work of art and ready for it to be one of my top picks of the festival. There was so much to enjoy in this first hour, and it was clear that directors Kentucker Audley and Albert Birney had an insane imagination and were willing to take this concept and run with it.

The concept of being able to see your dreams is not a new one in the world of sci-fi. However, having to monitor dreams and be taxed for what you dream about is quite unique. They fully bring that concept to life, with gorgeous production design to show the dreams in their full potential. There are fun elements within the sequences, particularly with the visual effects of having the tax amount pop up and the auditor tinted, showing that he is not fully in the dream but simply an observer.

Even with how wild the first act is, it was still easy to follow the story. There was a clear narrative running throughout, and one that was compelling and incredibly smart. The film delves into an idea that relates to dreams and taxing, and yet it is something that we can all relate to despite the heavy fantasy aspects. Whilst the film is creative with the concept and visuals, it still has a layer of rationality within the script to be able to follow it and understand the main themes.

Throughout this first hour, the script also deals with a blossoming relationship between the auditor, James Preble (played by Audley), and the aging eccentric Arabella (played by Penny Fuller and a younger version by Grace Glowicki). Their relationship throughout this first hour is incredibly sweet, and I was surprised at how the script balanced the fantasy aspect and main storyline with this lovely romance flowing throughout. It really helped keep me engaged with the story.

This is all until the final act of the film. In one swooping moment, the film loses all direction and completely neglects the story. It was nearly impossible to follow the story in the final act, as there was no set goal or conclusion to aim for. The film decides to go extremely experimental with the imagery, which was all well-executed, but sacrificed any of the compassion and care that I had for our leading characters and their situation. There was a pathway and a set of rules that the film established in the first hour, and then it felt like they became completely forgotten as we delved further into this mystical world.

It is hard to understand what the directors were aiming for in the final act of the film. With what was such a strong opening, it is disappointing that I never felt like I got a good conclusion. The technical elements stayed strong, but the editing became too much, the continuous-time jumps made the story impossible to follow and if there was symbolism in the purposeful decisions of the characters and settings that the directors placed us in, it didn’t connect with me here.

This is going to be the film that is the biggest disappointment of the festival, and that is with giving it a somewhat positive review. This film had so much potential and so much passion put behind it from Audley and Birney. It is such a shame that for every good aspect of this film that I can say about the first hour, the last act just took that all away and made the film end on such a sour note. Whilst it is easy to recommend for the first hour and all of the amazing aspects within it, be warned that the film does drop all of a sudden by the end.