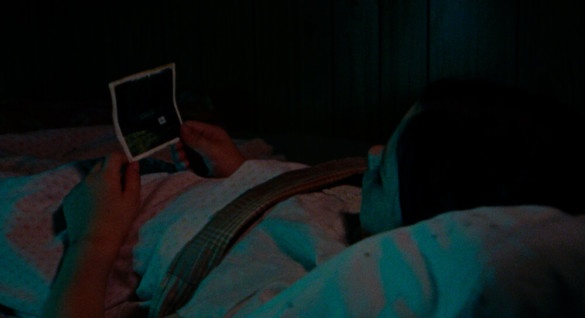 Synopsis: As a party wanders into the night, word arrives that Renée has emerged from obscurity. This cataclysmic moment ignites Modeste’s awkward reunion with his older sibling. Renée has been missing for years and her presence unsettles the family, which also includes her own daughter, Athene. As Renée begins to form her dreams from fragments of her past, ominous premonitions disrupt the land.

Renée (Rhayne Vermette) is a woman who suddenly returns home in her indigenous —Métis— community after being M.I.A. for four years. She has to mend everything she left behind when she left, including the relationship with her eight-year-old daughter, Athene (Isabelle d’Eschambault), who’s living with Renée’s brother, Modeste (Jack Theis), and his wife, Elenore (Valerie Marion). It won’t be easy, and she knows it. She tries her best to get back all the time she lost with Athene and for her actions to be understood by the people from Ste. Anne, but in order to get that she has to open some wounds she isn’t willing to unlock so easily.

The more people understand about life, the more they understand that home and territory aren’t always physical spaces. This film, written and directed by Rhayne Vermette (who also stars in it) as her narrative feature debut, works like a metaphorical journey of reconciliation and reclaiming one’s territory. A theme —a collective experience they all go through after colonization— that has been frequently interpreted by indigenous storytellers across the continent. Ste. Anne has a simple plot, yet it’s very profound and spiritual. The execution feels so natural that it makes it hard to believe we’re not watching a documentary instead of a fictional story.

Besides the plot and performances, other elements reassure the realism of the narrative. Shot with 16mm, the movie took 14 months to finish; some scenes were scripted and others were impromptu, which made the film look like we were watching footage from a family video camera. This isn’t far from reality: many members of Vemette’s family worked on this production. The design and photography are very dreamlike, to the extent of feeling as an experimental film that mixes well with the plotline.

Renée’s story is accompanied by ambiance shots with textures, atmospheric tones, and an interesting use of light and colors that serve as a mystical secondary character of their own. Ste. Anne is character driven, and the drama intensifies in slow motion. It isn’t cathartic, it is reconciliatory. You can’t expect a big plot with lots of sentimental twists, but you’ll definitely feel your heart warm after it has finished.

I never thought about it, but this movie made me realize that if there are coffee table books —visually stunning and aesthetic books that you display in common areas of your house—, there are also films that you wish you could display in your living room as any other piece of art. This movie is one of them. In some ways, it reminded me of Chloé Zhao’s films but with an experimental allure.

Ste. Anne won’t be a movie for everyone. Its intimacy isn’t for the general public, especially if they’re looking for a title with more action and repercussions. It is a short film that isn’t a short film (it lasts 80 minutes) that will work for you if you’re looking for a peaceful and fairy-esque story about a realistic family affair. Also, it’s always great to watch different perspectives and interpretations of what it is like to belong to an indigenous community, and this movie provides an interesting vision.