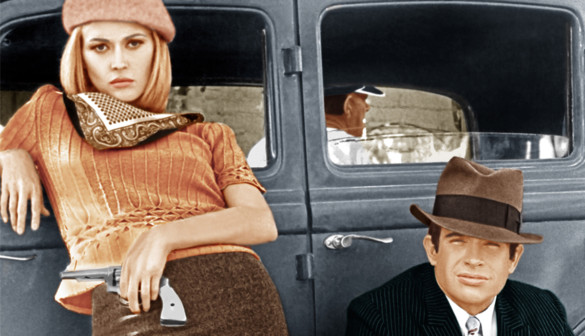 Bonnie and Clyde (1967) is famous for changing the landscape of American cinema. Slightly snooty cinephiles might note that it ‘stole’ a lot of editing techniques from foreign films and featured sexual content and violence that had been commonplace in European cinema for years. I also think that it’s fair to say that aspects of Bonnie and Clyde have dated poorly and it no longer looks quite as gutsy as other landmark films from the late-1960s. When you see it today, it looks relatively quaint and seems like a relic of its time. I say all of this because it seems rather unfortunate that many people watch it with the expectation that it will shock and titillate them. I don’t think that there was ever a time when the film’s best moments involved Faye Dunaway fellating a glass bottle or Warren Beatty shooting at an innocent bank teller. It endures as a classic because it produces a monstrous anti-heroine who attracts your sympathy, even as she repulses you with her behavior.

Even though the title and the advertising would suggest that this film is about a relationship between two criminals, this is really Bonnie Parker’s story. She’s just a beautiful small town girl when she comes across Clyde Barrow (Warren Beatty) stealing her car. She’s bored with her life, attracted to Barrow’s air of danger, and desperate to experience some excitement. In no time at all, the two of them are off on a crime spree and relish the fact that they become infamous celebrities who attract attention from the mainstream press. The police are on their trail but Parker chooses to tease and provoke the cops that come into contact with them. Barrow’s brother Buck (Gene Hackman) and his sister-in-law Blanche (Estelle Parsons) become part of the gang, along with the naive C.W. Moss (Michael J. Pollard). As time goes on, Parker becomes more and more aware of her own mortality and begins to realise that they will inevitably be caught and killed by the police.

Parker’s evolution from trigger happy, fame hungry sexpot to fatalistic cynic becomes the center of the narrative. The film’s best scene features the gang having one last picnic with Parker’s mother. She has come back to her small town as a legendary outlaw and it is clear that her mother disapproves of her daughter’s actions. Parker’s intentions and motivations are highly ambiguous. She herself doesn’t seem to know what she’s chasing after. Through use of montage, we have seen how life as a robber has gone from being glamorous and thrilling, to being legitimately scary and frustratingly routine. She returns home in order to experience a change of pace and seems to have decided that the comforts of an ordinary life could console her during this difficult period. Returning back home and reuniting with her mother appears to leave her feeling disappointed and hollow. She had idealized her previous life and attempted to forget the fact that it was so dull and uneventful. Rather than feeling a rush of warmth upon returning to safety, she comes to understand that there is nowhere to run and the glory days have passed her by.

The scene works so well because the screenplay sows seeds of doubt in our minds about the degree to which Parker is truly happy with her life. You also can’t get past the fact that Dunaway was a goddamn movie star and gave everything that she had to this role. She’s certainly sexy and charming but she is so intense that it makes sense when she cruelly mocks a police officer. She convinces us that Parker isn’t just an airhead who desperately wants to have sex with Barrow. He is a means to an end and she fully embraces his lifestyle. As the shine begins to wear off, Dunaway channels more and more desperation. She doesn’t try to build Parker up to be a woman of great intellect, but she makes her confusion interesting. Parker can’t comprehend why she is so dissatisfied with her life and Dunaway can handle her complicated emotions. It’s easy to see why she became the hottest star in Hollywood after playing a role that gave her so much to work with. It’s one of the few performances that deserves to be called iconic.

I have mixed feelings about some of the content that surrounds Parker’s character arc. Parsons’s shrieking, pantomime-y turn has aged poorly. It might have had everybody in the theatre yukking it up in 1967 but it goes over like a lead balloon today. Beatty is also as bland and vacant as ever. He is forever screwing up eyes and gazing off into the distance like a boy who can’t understand a question in maths class. There seems to be nothing going on behind his eyes and beyond his square-jawed good looks, it’s difficult to see why he ever succeeded as a leading man in Hollywood. With the exception of McCabe and Mrs. Miller (1971), he is a fantastically un-engaging screen presence.

Even if it isn’t the crème de la crème of New Hollywood classics, it is still captivating as a showcase for a thrillingly original character. You might also notice that it isn’t a terribly romantic picture. The chemistry between Beatty and Dunway is not the focus of the film and Parker is a more interesting character when she’s out on her own. Yes, it’s famous as a film about young lovers who kill, but the criminal lifestyle is more important than their romance. That means that AFI voters made yet another baffling choice and selected an acclaimed classic without considering whether it fit the criteria that they set for themselves.