Criterion Crunch Time: ‘Women On The Verge Of A Nervous Breakdown’ 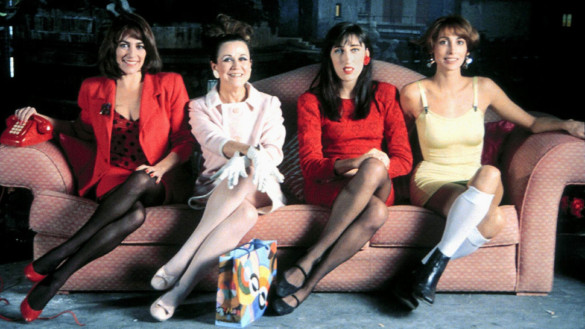 I am here to tell you that no, you have not seen it all before. When you watch a lot of movies, it is easy to feel like you have seen all the stories you can. After all, much has been made in literary circles regarding the fact that there are only seven basic plots. But filmmaking as an art is not just plot. How you tell the story matters just as much as the story you are telling. It is, after all, a visual medium. And that brings us to the work of ​​Pedro Almodóvar. One of his most critically acclaimed films, Women On The Verge Of A Nervous Breakdown, is leaving the Criterion Channel streaming service in just a few short weeks. Here is your (and my) opportunity to experience this film and talk about it here.

In terms of stylistic, visual choices, Almodóvar sets the bar nearly to the ceiling from the opening credits. His use of color, music, and pop art sensibility sets the tone for a film unlike any standard set by your experience thus far. This continues throughout the film. Color, specifically creates numerous shortcuts and messages throughout the film. The introduction of Ivan (Fernando Guillén) is filmed first in black and white, connecting him to both the past and a sense of style and nostalgia. Women On The Verge Of A Nervous Breakdown quickly morphs into color, and bright ones at that. Red plays a large role for our heroine, Pepa Marcos (Carmen Maura). This choice of color from the director incited both passion and regret as we explore her relationship with Ivan. These colors are just one example of Almodóvar working on a different level than most directors. Additionally, with the assistance of cinematographer, José Luis Alcaine, many impressive (and creative) compositions are blasted into our eyes. In particular, one-shot showing a prone Pepa through her glasses on the floor after she has collapsed is wildly effective in capturing our attention. It should come as no surprise that this film catapulted him into international stardom and was highly recognized on the awards circuit.

Women On The Verge Of A Nervous Breakdown is the story of Pepa, who has just been dumped by her boyfriend, Ivan. It is loosely based on a play written by Jean Cocteau, entitled “The Human Voice” and this is actually the first of two versions from Almodóvar. The second is a short film starring Tilda Swinton, which was released in 2020. In this first version, Pepa is also visited by numerous side characters, many of them women with their own problems, both separated and connected to her. Maura’s balance of emotionality, exhaustion and near cynical pettiness towards the other characters are a true gift. The challenge of this balance would be around most actors, but she manages this all and somehow remains a character that we both love and admire.

The film really takes off as many of these storylines converge. Specifically, her interactions with Carlos (Antonio Banderas) and Marisa (Rossy de Palma) lift Women On The Verge Of A Nervous Breakdown into another level entirely. The eccentric couple are touring apartments to rent, but Pepa smartly discovers that Carlos is Ivan’s son, from a previous relationship. Maura’s strong, aggressive performance, paired with Banderas’s shy, reserved actions pair perfectly. This, in addition to Marisa’s decision to drink drugged gazpacho, create hilarious moments throughout. The screenplay, also penned by Pedro Almodóvar, perfectly combines the high drama of relationships ending with situation comedy style misunderstandings. His ability to balance between these two poles demands much of the script itself, as well as the actors. Luckily, there are few, if any, missteps and despite drugs, suicide attempts, and screaming, the script remains surprisingly light and, dare I say it, fun.

Women On The Verge Of A Nervous Breakdown is, surprisingly, a bit of a message film. Pepa spends the entire film looking for a way to get Ivan back but finally learns her worth just before the final frames. Sure, it takes terrorism, a murder plot, random acts of violence, and moments of loss of sanity, but that doesn’t change the facts. When Ivan apologizes to Pepa for the way he has treated her, the film could easily go in two different directions. Almodóvar’s decision to empower Pepa, by having her shut down Ivan, even in the face of everything she stated that she wanted, makes the movie empowering instead of wholly depressing. Sometimes, it just goes to show that what we want is nowhere near as important as what we need. Pepa needs, and is able, to stand on her own, her head held high, walking away from toxic Ivan.

Every film that I am introduced to that is directed by Almodóvar solidifies him, not only as an artist but as a true great. He is unafraid and unflinching. This is true regardless of tone and genre. Almodóvar is willing to look both internally and externally. This enables him to find sadness, comedy, and room for growth all in the process of a single narrative. Add in his eye for visual flair and 99% of directors seem boring and drab in comparison. We should count ourselves lucky to be watching film during his long, wonderful career. I defy you to watch Women On The Verge Of A Nervous Breakdown and The Human Voice (remember, based on the same source material, but 32 years apart) and dare to find a lack of passion, craft, or ability. Almodóvar shows all of these and continues to throughout his entire filmography.

Next time, we will take a look at Clockwatchers, from director Jill Sprecher