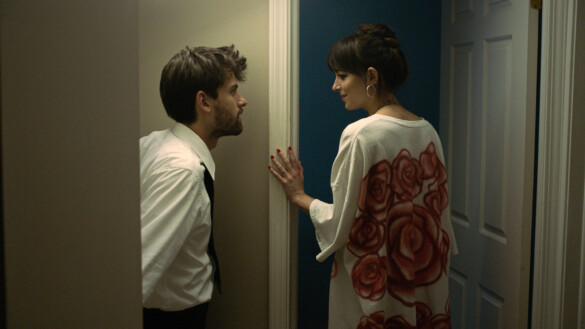 Synopsis: A young man who works as a Bar Mitzvah party host strikes up a friendship with a mother and her autistic daughter.

After the astonishingly mature, if laughably named, S#%!house, it was unlikely that writer/director/actor Cooper Raiff could avoid a slump. Yet, with Cha Cha Real Smooth, Raiff pulls off another coup of intimate and genuine storytelling.

Where another writer may stop and conclude a scene, Raiff has the exceptional ability to extend it, to build on it to get to the heart of the matter. He’s a writer who has patience with characters and lets them breathe, live, and expand into something more than a character on the screen. This acumen with character on the page in combination with his thoughts behind the camera is where Raiff shines. He lets the scenes he creates take on a life of their own. They’re long, unpredictable, and often uncomfortable in the best ways.

Raiff and cinematographer Cristina Dunlap create some terrific scenes. One of their best is a long tracking shot in which we follow a drunk Andrew (Raiff) as he spirals after learning Domino (Dakota Johnson) won’t be attending this particular Bar Mitzvah. Many people sense that something is off about Andrew including his mother (Leslie Mann) and little brother, David (Evan Assante), before the camera shifts to David’s perspective as he takes his girlfriend aside to have their first kiss. There’s even a terrific sight gag thrown in as Andrew references the host of the party is dressed like a clown, the camera pans to a table and, indeed, Mr. Schindler is wearing a clown outfit and very unamused by Andrew’s behavior and unprofessionalism.

This is the superb balance Cooper Raiff has struck with Cha Cha Real Smooth. The film has deep, honest conversations between people, but sometimes the funniest joke can come from the most dramatic situation. Other times, the joke precedes a moment of startling drama. This film isn’t about walking a fine line, but about ignoring the line and presenting a human as they are and as flawed and myriad as they are.

There is a scene late in the film in which Andrew knows his hopes about his relationship with Domino are falling through his fingers. He heads to his car as Domino’s fiancé, Joseph (Raúl Castillo), pulls into the driveway. In another film we would hate Joseph, and would consider him the antagonist, but in Cha Cha Real Smooth, Joseph is just someone trying his best. He stops Andrew and he tells Andrew that yes, he’s a dumb kid, but he has his heart in the right place. Essentially, the antagonist of the film is the barriers people put up to keep people from accepting their whole selves.

Cha Cha Real Smooth deals with mental health in a real way. Characters exist with depression, bipolar disorder, and autism, but it doesn’t define who they are. There is nuance and acceptance, as well as honest attempts at understanding. There are  no scenes in which the cast overacts the worst aspects these conditions can manifest. The conditions are treated as a part of these character’s daily lives and that’s a credit to both Raiff’s script and the actor’s performances.

Leslie Mann has ventured into the territory of dramedy before, but she is on such a different level with Cha Cha Real Smooth. She is so grounded and measured in her performance. She brings a warmth and aching to the role. While she never makes it explicit, her expressions and her body language show that her character is trying so hard to keep herself together, to anchor herself in family stability. It’s quite a beautiful turn for Mann.

There is so much to write and to gush about Cha Cha Real Smooth. It’s a film that breaks rules and makes us reflect on who we are. Cha Cha Real Smooth is a movie that reminds you life is hard, but if you’re paying attention, the good stuff will stick around in your memory. Cooper Raiff has hit on something utterly divine and it will be a pleasure watching his career from here on.