Movie Review (LFF): ‘Shadow Country’ is an Affecting Look at a Damaged Community 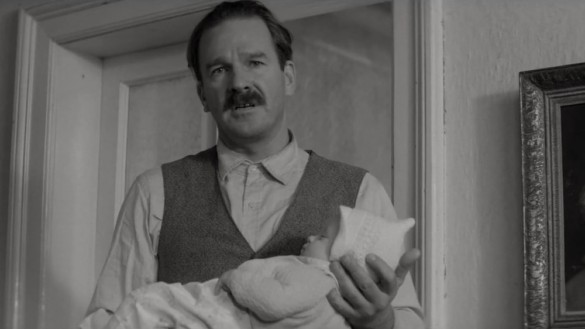 Synopsis: How to reconcile with killings committed by your own neighbors? How to face growing evil that nobody stands against? What can human will overcome and what is the value of humility and hope?

Guilt and regret reverberate through Shadow Country, a historical drama that spans from the 1930s to the 1950s set in a small Czech village. We are told the area, Vitorazsko, was split between Czechoslovakia and Austria, leading to shifting and split sense of identity amongst the villagers. This is only exasperated when the Nazi occupation forces the residents to choose between assimilating with the fascist powers or opposing them. By the film’s midpoint, we have reached 1945 and the Czech partisan government rules over the town, exiling or imprisoning any villagers with German identity or Nazi sympathizers. The titular shadows that haunt the characters are the dark shapes of their own mistakes and actions, creeping after them wherever they go.

Gorgeously captured in black-and-white, the main strength of the film comes from cinematographer Divis Marek. In this collaboration with director Bohdan Sláma, Marek opts for frequently using long, unbroken shots consisting of multiple set-ups and angle changes. This gives the actors free reign to dictate the energy of the scenes with their performances, subtly changing the power balance of the unsteady calm that settles over the town with a sly insult or undercutting question. In addition, the use of crisp black-and-white images tie closely with the major themes of the film. Who is in charge changes so frequently, and the definitions of what is right and wrong are always fluctuating, meaning morality is more complex than being black and white. There are many more shades of grey to the behaviors of this small community.

Most of the film’s unnerving tension comes from the behavior of the villagers. As the overarching powers come and go, first the Third Reich, then the Partisans, and finally the Soviets, most of the characters find some opportunity to better their personal situation or shelter themselves from persecution. Sláma and screenwriter Ivan Arsenyev make it clear that the evil of the Nazis and the miscarriages of justice by the guerrilla Partisans are not responsible for the village tearing itself apart, rather they simply facilitate an environment where preexisting hatred is given permission to be on full show.

From the opening scenes, you get the sense that under the surface of the pleasant village life lies corruption and selfishness. During a jovial baptism celebration, after one man spies on a woman’s infidelity, he sidles up to her and in hushed tones tells her that if she won’t sleep with him, he’ll tell her husband what he saw. We see repeated instances throughout Shadow Country of individuals not thinking about what is morally right, but what will improve their own position. Upon being confronted with injustice, some people choose not to challenge it, but instead to see if they can exploit it for their own benefit.

Because of the grand, sweeping movements of history, the characters don’t particularly have that much agency over the story. They’re at the whim of greater forces and spend the runtime trying to keep a low profile as their world is stripped down piece by piece. While the pacing of the drama is slow, time jumps are frequent, meaning we get to see transformations not only in setting but in character. The most compelling comes from the resistance fighter Josef (Csongor Kassai) who returns from a concentration camp resolved to expunge the village of anyone who helped the Nazi rule. It’s through Josef’s perspective that we see the exile and execution of the villagers with the authority of the Partisans, and Kassai brilliantly portrays Josef’s internal battle between wanting revenge for wartime atrocities with his desire to return the village to the state it was before the war. He can’t recognize that trauma has transformed him and his community, and by the end, he doesn’t even resemble the man he started as.

Sláma uses the time jumps effectively, cutting from moments of great pain and crisis to scenes where characters have been transformed, their old selves gone and irretrievable. By skimming through the 15 years the film takes place over, Sláma only confirms that these people, and their lives, are lost to time, uncared for and forgotten. There’s no going back to how things once were.

Cutting through time like this has some drawbacks though. It can be difficult to trace the large swathes of characters at different periods of their lives, and weak characterization means it’s easy to get a bit lost. Sometimes the film has to pointedly remind the audience of significant relationships, which robs scenes of their intended emotional poignancy. One character who takes center stage in the first act is relegated to a background extra by the end, a problem that would have been solved by a tighter narrative focus.

But while the distinguishable details of the ensemble characters may not be memorable, their silent shouldering of the pain they’re subjected to is. The collective trauma that rings through the film is affecting and thought-provoking, and Sláma pointedly investigates the impact that acting in cruel, self-interested ways can have on others. While it suffers slightly from an unfocused narrative, Shadow Country succeeds in its main objective – showing the indelible moral stain that permitting abuses of power has on your character.