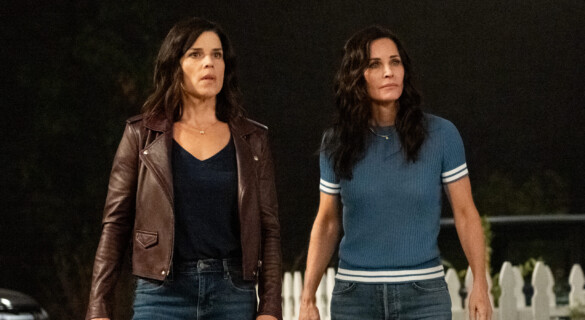 Synopsis: Twenty-five years after the original series of murders in Woodsboro, a new Ghostface emerges, and Sidney Prescott must return to uncover the truth.

After the huge success of David Gordon Green’s Halloween (2018), it seemed inevitable that Scream would finally return in one form or another, even though after three sequels there didn’t seem to be anywhere fresh the story could possibly go, and even though the quadrilogy’s maestro director Wes Craven passed away in 2015. But then Matt Bettinelli-Olpin and Tyler Gillett, the talented directors behind the superb Ready or Not, came up with a concept strong enough to not only greenlight a new installment in the twenty-five-year-old franchise but also lure back the core trio of Neve Campbell, Courteney Cox, and David Arquette for another go-around with Ghostface.

The original Scream from 1996 is one of my all-time favorite films, and I am a big fan of all the sequels, too—yes, even Scream 3. Sidney Prescott in my mind is the most iconic slasher movie final girl of all time, and the mix of terror, comedy, and horror movie commentary in each of the four films is a tricky balancing act Craven always excelled at. His directing swan song, 2011’s Scream 4, could have ended the series with a whimper after more than a decade since the third film, but he proved he could still deliver the goods, the film was creative and scary from beginning to end, all the way to the rousing finale in a hospital where Campbell delivers the classic line that begins with, “You forgot the first rule of remakes, Jill…”

What else was there to do and say after Scream 4? What more could be added to the stories of Sidney, Gale, and Dewey? As it turns out in the new fifth installment, awkwardly titled just Scream, not much. The three legacy characters mostly take a back seat to a new group of younger characters trying to outwit the killer. Such was sort of the case in Scream 4, with Williamson’s screenplay trying to establish a new cast of young faces that could bring the series into a new decade, but Sidney, Gale, and Dewey still had plenty of screen-time in that film, with moments of quiet reflection and tension-filled action. The newest Scream, with all its positive traits, unfortunately never gives enough for the core trio to do, with most of the new characters coming off as flat and forgettable.

As can be seen in all the trailers, Jenna Ortega has the honor of being the first victim stalked by Ghostface, the attack on her character Tara bringing her sister Sam (Melissa Barrera) back to Woodsboro with her boyfriend Richie (Jack Quaid). We discover a secret about Sam that ties her back to the characters from the original movie, and soon she’s seeking out Dewey (Arquette) to help her solve the mystery about who’s behind the Ghostface mask. When more bodies begin stacking up, Gale (Cox) and Sidney (Campbell) return to put the latest killer, or killers, in the ground for good.

The new Scream will likely entertain and even delight most moviegoers who aren’t asking for anything more than a fun ride, especially casual fans of the franchise. It delivers exactly what you expect—a suspenseful whodunnit, lots of jump scares, a major kill every ten to twenty minutes. The murder scenes are the most brutal this franchise has ever seen, with at least three that will please any die-hard horror fan. It’s a joy to see the return of so many characters we love (including a couple many won’t be expecting!), and the film moves along at a fast pace, with big surprises along the way. The most shocking moment of all is one I guessed early on, but that didn’t lessen the impact of the scene itself (the movie’s best scene, by far) and everything that comes after.

But for the first time ever as a Scream fan, I walked out of the latest installment slightly disappointed, not satisfied by the reveal of Ghostface, not happy with the lack of tension in the film’s third act. I’m surprised by all the hyperbolic enthusiasm I’ve seen online about this movie because I feel if you’re a colossal fan of this franchise like I am, it will be hard to ignore its flaws and not recognize it’s a step down from the other four installments. The directors’ previous movie Ready or Not was a wildly original thrill ride every step of the way, but the enormity of their reverence for Scream and Wes Craven trickled into a screenplay that is always paying homage and offering constant Easter eggs for fans, to the point where the new installment never gets to be its own thing.

The biggest problem with the new Scream by far is that none of the new characters, and I mean none, is of any interest. Actors like Sonia Ammar, Mikey Madison, and Mason Gooding do what they can, but the characters are too underwritten to ever care about. And with long stretches of time with only the new cast on-screen, the great enthusiasm I had for the movie at the beginning certainly faded quickly. All the specific ties to characters from previous films feel more forced than clever, and the flashes to a certain someone when it comes to the most prominent new character Sam comes off as silly and awkward. And a Randy Meeks-like monologue from Mindy (Jasmin Savoy Brown) at the end of the first act is so on-the-nose meta that it’s hard to believe a word she’s saying.

Whereas Williamson made the new characters pop in both Scream 2 and Scream 4 and blend in well with the legacy characters, James Vanderbilt and Guy Busick only find dramatic tension in their screenplay when Dewey calls Sidney in a panic or when Dewey and Gale reunite at a murder scene. These are the characters we’ve come to see, that we care about deeply, and I was disappointed to discover how little they’re utilized here, especially Sidney, whose appearance in this film amounts to slightly more than a cameo. Jamie Lee Curtis isn’t in a ton of the 2018 Halloween, but Laurie Strode’s cat-and-mouse game with Michael lasts a long while and has tons at stake; I sadly never felt the stakes at the end of the new Scream, never worried for Sidney’s safety the way I always was in the previous films. Why spend minutes on end following Dylan Minnette walk around his house, with about three too many false jump scares, when you have Neve Campbell back as Sidney Prescott and give her almost nothing to do!

Yes, many of the nods to previous movies will put a smile on your face, and one daring choice made by the filmmakers at the halfway point felt earned, elevating this newest installment enough to make it worth seeing, to be sure. And just spending time with Sidney, Gale, and Dewey again was pure Heaven, like a visit with old friends. Arquette’s performance is the film’s best, the sweet humor and delicate touch he gives an aged and beaten-down but forever courageous Dewey Riley I won’t soon forget.

But like with almost every other reboot I’ve seen in the last few years, I wanted it to be so much more. It’s a passably entertaining but also constantly frustrating revisit to a franchise I adore, a movie that proves Kevin Williamson’s wit and originality in the world of Woodsboro can’t be matched, and that the dear departed Wes Craven was a one-of-a-kind talent, the likes of which we will never see again. There is, alas, only one true Scream. And that’s the 1996 original.