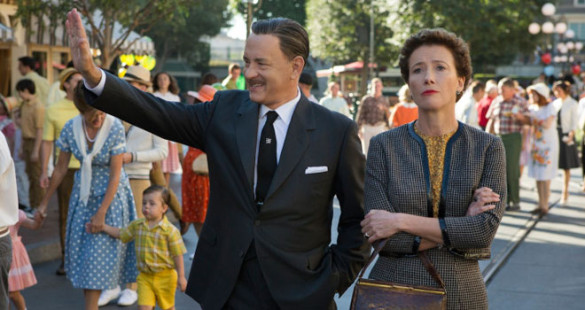 Synopsis: Author P. L. Travers reflects on her difficult childhood while meeting with filmmaker Walt Disney during production for the adaptation of her novel, Mary Poppins.

DIRECTION
If there’s one thing John Lee Hancock is really good at, it’s giving a film heart. Saving Mr. Banks is a movie that thrives on heart, and while it’s not all singing and dancing, it’s the soul of this film. The big thing about this film that you’ll notice first, is that you’re not watching a film about the behind-the-scenes of the movie Mary Poppins. It’s merely a backdrop our characters are dropped into as they explore something more beneath the surface, especially with Poppins’ author, P.L. Travers. Hancock’s use of flashbacks to tell her story was executed well, to a point, and it set the tone of the movie really well. At some point, it becomes overplayed in some cases, but the overall technique works for how he wanted to present the character. The aesthetic Hancock create’s in nice and it definitely takes you back to the early 60’s. Some of the visuals were lacking but the main aesthetic was there, whether in the 60’s or way back to the early 20th Century in the flashback scenes. Overall, it’s a charming film that is funny and Hancock brings a picture that is more than satisfying.

SCRIPT
Kelly Marcel and Sue Smith’s script was at one point a hot commodity and it’s easy to tell why. The real-life story is an interesting one but this re-creation had a little something different in mind. As I mentioned earlier, if you want a fun, behind-the-scenes look at Mary Poppins, then get out spoonfuls of sugar and be ready to be disappointed. This movie is about Mrs. Travers (that’s what she likes to be called) and the real heart of who Mary Poppins is and what she’s about. The tone of the story, while light and fun in many places, is darker and depressing in other places. It’s about the heartache that motivates Mrs. Travers and why this Mary Poppins is more like family to her, than a character on a page. On the surface Mr. Travers seems like a really huge, umm…let’s say not nice person, until you understand her more. Mr. Travers makes things incredibly difficult for Walt Disney, who’s trying to buy the rights from her to make the movie. The script brings forth those moments well in the first two acts but completely forgets those challenges in the third act, making the story more flat towards the end. Between that and the overuse of flashbacks, some of the story needed to be more tightened. Overall though, it’s deeply-rooted, has a ton of heart and will make you laugh. Again still more than satisfying.

MOVIE REVIEW: The Hobbit: The Desolation of Smaug

PERFORMANCES
Emma Thompson shines as Mrs. Travers and absolutely disappears into this role. Thompson really brings this character to life and shows us what was most likely what really happening to Travers in real life. Tom Hanks, while not on the level of Captain Phillips, is still really good and funny as Walt Disney. It’s the first time Walt (that’s what he liked to be called) has ever appeared on screen in a major motion picture and Hanks did a fantastic job. The big surprise? Collin Farrell, who I believe is incredibly underrated, was big here. He plays the alcoholic father of Travers in the flashback scenes and he was really strong. His scenes with Annie Rose Buckley, who was also great, were absolutely adorable and crucial in telling the backstory. Can someone please explain to me why Paul Giamatti is in this movie? I mean, the guy’s a great actor and he doesn’t need to be playing small roles like this where has almost nothing to do. Of course, he brings something to this character though, much more than it probably needed to be. This is one area you definitely won’t be disappointed by.

SCORE
The great Thomas Newman scores this film and brings a gracious core that adds some really nice layers to the film. The flashback scenes have some nice time period music, while the 60’s scenes have a more contemporary feel to them. Of course, in a film like this, Newman’s score is accompanied by some great music by Jason Schwartzman and B.J. Novak who play the famous Sherman brothers. It’s a great soundtrack, and if you’re a fan of Mary Poppins, you’ll really enjoy the music to this film.

FINAL THOUGHTS
Saving Mr. Banks is a good movie that most audiences will enjoy, despite a few flaws. I’m not 100% convinced this is a movie for children, even though it’s a Disney film about a Disney film. The main themes are kinda bleak, especially towards the end of the movie and most kids (younger than Middle School) could miss the main goals of the movie. The performances are amazing though and it’s still an interesting look at the dynamics it took to make this film happen. While this re-creation is probably far off from reality, it’s still fun and has some deep-rooted heart that will surly satisfy.