Movie Review: Dragon on in The Hobbit: The Desolation of Smaug 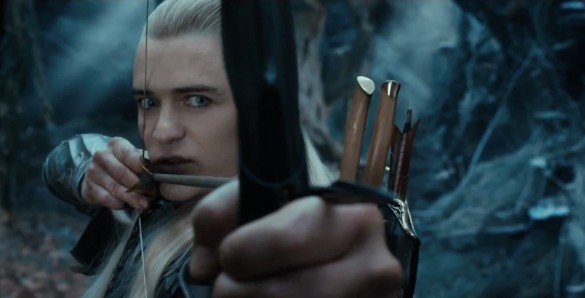 Synopsis: The dwarves, along with Bilbo Baggins and Gandalf the Grey, continue their quest to reclaim Erebor, their homeland, from Smaug. Bilbo Baggins is in possession of a mysterious and magical ring.

DIRECTION
Peter Jackson once again takes us back into Middle-Earth as we continue our journey with Bilbo Baggins and the dwarfs as they look to reclaim their homeland. The aesthetic Jackson creates is familiar to his Lord of the Rings trilogy but is much more CGI-heavy much like the first Hobbit. Jackson is more focused in Desolation of Smaug but there’s something still missing from the magic he captured a decade ago with our other little hobbits. The CGI is too much and is often distracting as our beloved heroes are escaping one near death experience after another, making it harder to be engaged with what Jackson is trying to do. Some of the effects are really cheesy and were probably well-intioned, but were poorly executed. Well what about Smaug? The aesthetic Jackson creates for the character is great but the execution of it isn’t entirely believable comparatively to what we’ve seen in this world already. Some of the action is fun though and we get some really intriguing moments. Overall, while better than The Hobbit, it’s not much better.

SCRIPT
To begin with, we get a short backstory where we see Gandalf meet with Thorin as he explains to him why he needs to become King again. Why it’s in this one and not the first film is beyond me. From there we’re taken back to the present where Bilbo and our gang of dwarfs are trying to get back to their homeland to take it back from Smaug, our intimidating fire-breathing dragon. The script here is definitely more focused than the first Hobbit film, which made the film more fluid. However, there’s a few subplots that are completely, utterly unnecessary that detracts from the film and only feels like it’s there to meet Jackson’s quota of a 3-hour long haul in the theatre. Both movies, really, have story arcs that just seem to dragon (pun intended) and could be cut out or shortened. The dialogue for some characters were frail while others were pretty rich, reflecting inconsistencies throughout the film. I will say though, it’s a pretty boisterous movie on many levels that takes some serious turns in the third act. Some worked and some didn’t. Overall, the focus was better, but there are still many unnecessary factors that should of been cut.

PERFORMANCES
Ian McKellen may as well dress up as Gandalf in real life because he’s absolutely captivating as this character and who wouldn’t want to see that all the time? He’s fantastic and easily one of the better parts of the film. Martin Freeman does a good job as Bilbo but there’s not much depth going one. Freeman’s pretty one-dimensional and where Frodo started to lose himself after having the ring on, we have yet to see any of that from Bilbo. Maybe, the ring just liked Bilbo better? Of the dwarfs, you got to love Ken Scott as Balin. He’s the old-school guy that has all the best lines and delivers them epically. It’s also great seeing a familiar face in Orlando Bloom who reprises his role as Legolas. I’d prefer to see more of the real Bloom than his CGI-version, which we see way too much of. And while we pretty much only see him fight, he’s still the best archer in Middle-Earth. So…Evangeline Lilly is one gorgeous elf. Her story arc could of been handled better but she does a great job for what she has to do. Benedict Cumberbatch, who voices Smaug, really gave life to the character, much like what we saw Andy Serkis do to Gollum.

SCORE
Not the best Howard Shore score but he shows range in his musical elements going from strong action score to scary thriller score pretty easily. He hits a lot of different notes (literally) which added a nice touch to the film when it needed it. And you got to love the Shire theme when it comes on. Overall though, it’s nothing stand-out worthy and it’s not much of a joy outside of the film.

FINAL THOUGHTS
The Hobbit: Desolation of Smaug was anything but impressive. Just because you have the resources and abilities to do anything with CGI, doesn’t mean you should go crazy with it. And honestly, at times, the CGI wasn’t even that great. While it gives you the chance to create these amazing, imaginative worlds, you have to consider why live action characters are there and how they are relatable. This film felt cartoony with a few moments of live-action characters built into it. There were a few solid moments though and it left off at a good spot, if we have to have a third film that is.