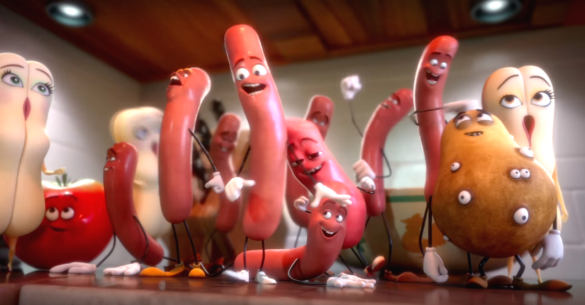 Synopsis: A sausage strives to discover the truth about his existence.

Let’s be honest. At some point in our lives we have all made sex jokes about hot dogs. If you haven’t, then you must have lived a sheltered life. Seth Rogen knows how to relate to people, and if you are making an R-rated movie about anthropomorphized food, the sexual tension between foods is going to lead to a plethora of obvious sausage jokes. Surprisingly, Sausage Party is Rogen’s most complete movie; that is, more than just sex and drugs. Rogen’s movies are not always very funny, because his repetitive motif of jokes has become stale over the years.

Shopwells is a supermarket where various groceries all dream of one thing: To be chosen by a customer and taken to the “Great Beyond” (outside the gleaming automated doors in a cart). The various foods from around the world are kept under control by an unprovable belief system, managed by the “Gods.” They believe that they will only be picked if they remain pure of spirit. This fear prevents sausages like Frank (Seth Rogen) and buns like Brenda (Kristen Wiig) from conjoining. If this sounds preposterous, stay with me. It all comes together through clever writing and visual gags, all cultivating into being one of the best films of the year.

Nothing is off limits in Sausage Party, so in typical Seth Rogen fashion there are racial and homosexual jokes, so be forwarned if you offend easily. The script is very predictable and drags on at times. There are, however, a few scenes that jumpstart the story, and without them I think the story would have fallen flat. A returned Honey Mustard (Danny McBride) exposes the truth about the great beyond which leads to a pretty good 45-minutes of entertainment.

One concept that made this movie great is the fact that humans can interact with the food, which finally answers my lifelong question of if I could interact with my food what will we talk about before I consume them. I know I am not the only one who thought this?

There really isn’t much more to say about this film as you already know what to expect, so if you are a fan of Rogen then you will absolutely love this film. Even if you are not a fan of Rogen, there are still plenty of bright spots. Sausage Party has an insanely creative ending and further cements Rogen in the juvenile behavior stereotype that you will either love or hate.