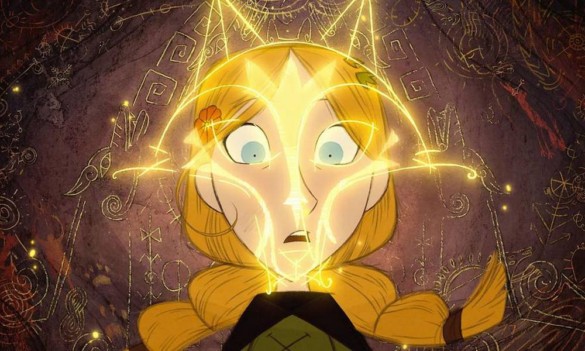 Synopsis: In a time of superstition and magic, when wolves are seen as demonic and nature an evil to be tamed, a young apprentice hunter, Robyn, comes to Ireland with her father to wipe out the last pack. But when Robyn saves a wild native girl, Mebh, their friendship leads her to discover the world of the Wolfwalers and transform her into the very thing her father is tasked to destroy.

Closing a spiritual trilogy of Celtic folklore, Kilkenny-born animation studio Cartoon Saloon has crafted their best and most beautifully rendered film yet. Beginning with the small but dazzling The Secret of Kells (2009), and developing with The Song of the Sea (2014) and The Breadwinner (2017) – in equally miraculous displays of heartfelt, magical storytelling – and now their latest effort, Wolfwalkers, they have earned their right to be spoken in the same hushed reverence of animation giants Studio Ghibli. What directors Tomm Moore, Ross Stewart, and their talented team have created here, can only be described as glorious spell work.

Set in Kilkenny, 1650, Wolfwalkers plants its roots in a period of upheaval and cultural change. England is in the process of colonizing Ireland, led by the iron-first rule of their villainous Lord Protector (Simon Mcburney), who spends most of his time punishing people with imprisonment if they so much as whisper a challenge to his beliefs – the only beliefs. He’s a stand-in for Oliver Cromwell, and if you replace the shapeshifting wolves with witches, this is essentially a story about witch hunts and the violent purge of mankind’s connection to the spirit of the natural world. A similar battle between man and nature has been explored wonderfully in animations such as Princess Mononoke (1997) and The Tale of Princess Kaguya (2013), and Cartoon Saloon handles weighty themes with just as much intelligence and perhaps even a greater degree of style. The choice to tell this historical tale through a blossoming lens of female friendship also feels inspired. The result is a resounding triumph, not merely establishing Cartoon Saloon as a leading voice in animation, but cementing them as one of our most gifted storytellers.

Robyn (Honor Kneafsey) is a sprite, curious young English girl who dreams of being a skilled hunter like her father, Bill (Sean bean). Her only friend is a clever hawk called Merlin. They’re outcasts, moving to Ireland because of her father’s loyalty to the Lord Protector. Bill is gruff, overprotective, but also warm, continuing the studio’s emphasis on lone fatherhood. The voice of Sean Bean couldn’t have been better suited. Unfortunately, under the thumb of the Lord Protector, Ben is so locked in traditional ways that anything else is considered a threat or fairy tale. His journey, like Robyn’s, is one of soul-searching in the face of tyranny. Ben hunts with the ignorance of a man that can only see as far as his daughter’s safety, with a reluctance to open himself up to anything that conflicts with this. As a result, the free-spirited Robyn is stifled; the city gates keep her locked in place – and in the ways, girls are expected to be – like an iron cage. Everybody inside Cromwell’s walls is blinded by fear and bias ideologies. It takes an outsider in Robyn, and then a real outsider (although this is her home) in the fiery Wolfwalker Mebh (Eva Whittaker), to ignite a spiritual revolution.

An instantly charming flurry of orange hair that shrouds her like a cloak, Mebh is all bounce and rebellious snarl, and the perfect foil to the brown shades that make Robyn’s world of muddy streets and sweltering kitchens feel deadly mute. By comparison, the autumnal green, yellow, and oranges of Mebh’s forest playground feel vividly awake with possibilities – an interesting caveat to this is that Wolfwakers can only assume their wolf form when they are asleep, perhaps a wink to the importance of following our dreams.

The film is a total joy, terrifically paced and carefully constructed with adult themes, making its magic sing all the louder. It’s the stuff of childhood wonder, but once again, the studio’s immaculate, best-in-class visuals take center stage; a flowing tapestry of bursting color, pulsing with dizzying energy that highlights Robyn’s rapturous journey of rebellion and freedom.

Cromwell, an archaic, mechanical presence has been drawn with appropriately dark, jagged edges, efficiently cutting the two ideas of the film in two when mirrored against the soft, transferable suppleness of the wolves that live in the forest he wants to cut down. It’s a distinction that only good animation can do and the film frequently uses its lyrical imagery to show the story at heart, whether it’s guiding you with a series of comic book style boxes that heighten action or juxtaposing various artistic techniques as a way of exploring two opposing belief systems. Every single frame of Wolfwalkers has the depth and texture of a watercolor painting.

Much of the story is one of spiritual change, in the humans that become wolves, in depictions of faith and loyalty, and the relationship between a father and daughter. After a playful game of cat and mouse, a slight scratch passes the Wolfwalker gene to Robyn, who gradually, in her transformation, becomes the person she’s meant to be. As Mebh puts it, and I’m sure wise children will agree, ‘being a wolf is a lot more fun.’ From here, the animation only gets better, more adventurous, and the film’s heartbeats all the faster. Its centerpiece musical sequence ‘Running With The Wolves’ by Aurora is euphoric – as good, if not better, than any film sequence this year. And so, with a breathless tug of the sleeve – in the same manner in which Robyn becomes enveloped in Mebh’s wildness – this richly imagined folktale sweeps you far, far away.

Crucially supporting a magical friendship with thoughtful historical underpinnings and an urgent call-to-arms rustling in its twinkling seams, Cartoon Saloon has made one of the best of films of the year. There’s an air of greatness akin to the irreplaceable children’s films of Disney’s past. Essential storytelling for children and parents alike, Wolfwalkers already feels like a timeless classic.