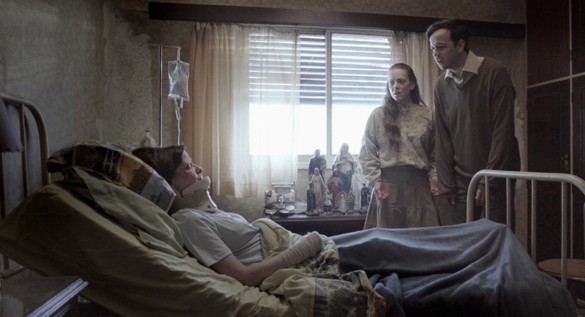 Director: Martin Blousson, Macarena García Lenzi
Writers: Martin Blousson, Macarena García Lenzi
Stars: Agustina Cerviño, Valeria Giorcelli, Pablo Sigal
Synopsis: Two siblings who live in the house of their recently deceased father are visited by their paternal half-sister to discuss arrangements after his death. After a fall, the half-sister must be cared for by the siblings.

There are many criticisms, that depending on the context, hold little to no water with me. One of those is “You’ve seen this story before.” This can mean any number of things. Among them are that it feels reminiscent of other films, fits squarely within a genre, or is a universal story. Because yes, there are only so many types of stories available for us to tell. But no, they are not all the same, even if there are similarities. So, as in all things, the experience of a film is not so much dependent on the story being told, but rather in the way it is told. One of those types of stories is a person trapped with possibly dangerous people due to an infirmity of some sort. The most obvious example is, of course, Misery, but there are countless others. Some stand out and some do not and the new film Rock, Paper, and Scissors is sadly the latter.

The main problem with Rock, Paper, and Scissors is not so much the story we have heard before, but the pacing. There is nothing wrong with a slow burn, but in order to keep the viewer’s attention, this makes for a much larger challenge. In the opening, there is clearly awkwardness between two siblings living in their recently deceased father’s house and their half-sister, who has come to divvy up property. The siblings, Jose Maria (Agustina Cerviño) and Jesus (Pablo Sigal), open the film clearly socially inept and the power seems to be in the hands of the half-sister, Magdalena (Valeria Giorcelli). This introduction, in which it is learned that they cared for their father after a failed suicide left him an invalid, is the most interesting bit of work from the three leads. It allows Giorcelli (and us) to watch the siblings interact and wonder what exactly is wrong. However, after she falls down the stairs, much of the suspense quickly unravels.

Directors Martin Blousson and Macarena García Lenzi use Jose Maria’s focus on the story of Dorothy from The Wizard of Oz as merely a stand-in for a semblance of character work from either of the siblings. On the bright side, it does allow for some interesting visual choices. It is never easy for a talented director to offer visuals made to represent amateurish work on the part of one of their characters. They manage this feat and it does allow us to question the state of mind of Jesus without simply stating facts. After the aforementioned fall, the film places Magdalena as a patient and Jose Maria as her caretaker. As Jesus mainly takes a back seat, the audience slowly is introduced to backstory about the deceased father and the relationship between Magdalena and Jose Maria grows.

But sadly, none of this is quite enough. Due mostly to the achingly slow pace, and a few abrupt moments of change, there is an almost complete lack of urgency to Rock, Paper, and Scissors. There are interesting moments here and there, but they would work better in a vacuum than in the context of the film. These shocking moments seem to be there as if the directors sense that this is the moment where the audience is beginning to shift in their seats. They are not organic and are akin to jump scares in more standard horror fare. This really is a shame because both Giorcelli and Cerviño are providing subtle work that deserves its own spotlight. The character of Jesus is seemingly forgotten for most of the runtime and only makes random appearances to provide a fairly obvious antagonist with little reason to exist aside from this.

Like any movie of this sort, Rock, Paper, and Scissors provides its share of surprises, twists, and turns. And yet, because of the lack of forward momentum, it becomes difficult to care about the reveals. They are not predictable, but there is no reason to concern ourselves with them. Frankly, it is a consistent challenge in films where one of your lead characters is mostly bedridden. There is a distinct lack of action inherent in that scene partner. It is, in most cases, left up to the directors, through shot composition and creative movement, to keep an energy to the filmmaking. Martin Blousson and Macarena García Lenzi attempt this through fantastical moments and mildly out of place angles in small moments. However, the majority of the film is relatively static, which makes these scenes suffer. Their work with their actors should be commended, but the film itself needs a push forward that it absolutely never receives.

The most painful movies are not those that are actually bad. Instead, it is the films that have a kernel of a good idea. Rock, Paper, and Scissors is one of the upsetting latter. It boasts good to great performances throughout, has moments of dread, and is genuinely shocking. And yet, these things never coalesce to make a film that will have a lasting impact. It is not a waste of time by any stretch but will leave you wanting more, or if not more, wanting different.