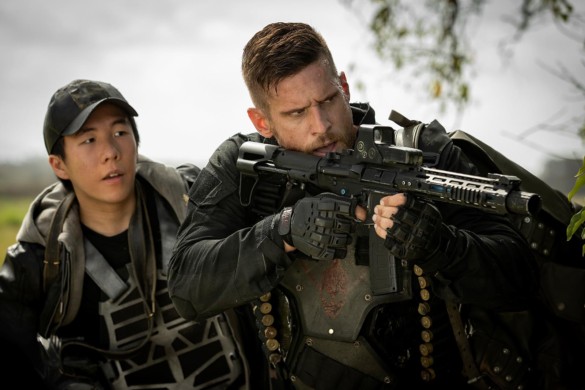 In the age of superhero movies bankrolled by an oligarch with mouse ears, it’s unusual to find an original project that packs so much passion, ambition, and scale with so little budget. Yet Luke Sparke had only around $20 million to create the sequel to his 2018 debut Occupation, itself made for under $10 million. Despite the fact that $20 million is probably what the catering alone cost on movies like Endgame, Occupation: Rainfall still manages to look gloriously epic (if a little underlit at times).  The production value here is truly a step up from the original. The effects hold up, the set designs are impressive, and the costume designs actually much more detailed than you might imagine. It all adds up to a movie that looks the part, even if it falters slightly in some other ways.

Occupation: Rainfall takes place a few years after the original which saw an alien invasion, who came to be known to the citizens of Earth as The Greys, take place in Australia, as a group of ordinary civilians take up the fight against them. Now those civilians are battle hardened and gruff. Matt (played by Dan Ewing) leads the resistance alongside Amelia (Jet Tranter), her brother Marcus (Trystan Go), and defected Grey soldier Gary (Lawrence Makoare), whom everyone seems to treat with disdain. They hear of an alien code word called Rainfall, which they believe could be a clue to the Greys’ plans. They set off into the wasteland in search of answers, while Amelia stays behind to help survivors and clashes with Commander Hayes (Daniel Gillies) who intends to employ a scorched earth tactic to destroy the Greys once and for all.

We see very little in the way of character development this time around. Sparke seems to be done with building his characters and is far more invested in the bells and whistles. This is not necessarily a bad thing: the acting in the original was a little sketchy, and nothing much has changed here. Add to this that these actors have to deliver clangy dialogue which even the best in the business would struggle to pull off. There are a few notable exceptions to this: New Zealand legend Temuera Morrison (he of Jango Fett fame in the Star Wars prequels) is back, and is as solid and dependable here as he was the first time around. Jason Isaacs and Ken Jeong even make an appearance pulling off an odd-couple comedy shtick, with varying results; the former as an alien named Steve who is fond of both Hawaiian shirts and pop culture references.  Unfortunately, cameos from the likes of Morrison, Isaacs, and Jeong can’t elevate Occupation: Rainfall above a certain level. Though the production value has improved, the writing hasn’t. Throughout its two-hour runtime, Rainfall feels derivative – taking its cue from much better works and applying them lazily here, a sort of cut-and-paste of clichés which threaten to make the eyes roll at times. You’ve seen and heard this all before.

The pacing is amped up significantly from the first one, and the net widened to include such things as alien space horses and all manner of other creatures. The opening scenes have a little bit of a cantina feel to them, and there’s genuine excitement that maybe you’re about to watch something brilliantly original and fresh until the narrative – what exists of it – hampers the tone.

A third act revelation means we may not be done with the Occupation universe yet, and there’s hope that – should Rainfall do well – Sparkes might get the budget he needs to wrap things up. For though the dialogue is flat, the plot cliched, and the acting just on the wrong side of B-movie, it’s so admirably ambitious that you can’t help but root for it a little. If only there were more independent movies out there who would reach for the stars. Alas, Rainfall comes some way short of success, but it looks beautiful and tries hard, and for that, it should be applauded.

Signature Entertainment presents Occupation Rainfall in Cinemas and on Digital from 9 July.