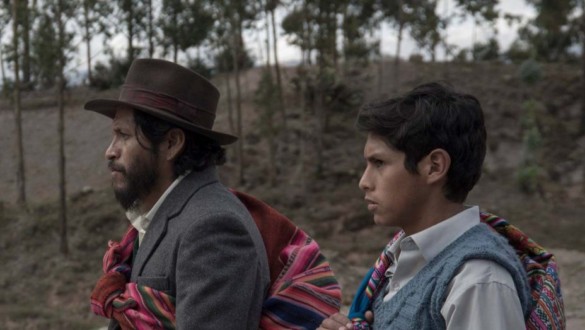 Synopsis: Segundo Paucar, a 14 year old boy wants to become a master story-box maker just like his father to carry on with the family legacy. On his way to a community celebration in the Andes, Segundo accidentally observes his father in a situation that shatters his whole world. Trapped in a chauvinistic environment, Segundo will try to deal in silence with all that is happening to him.

Alvaro Delgado-Aparicio’s poignant directorial debut represented Peru among Academy voters this year. Although it ultimately did not make the cut for the newly renamed Best International Film category, Retablo is still worth consideration from cinephiles.

Using the Andes Mountains as a backdrop, Delgado-Aparicio weaves together this tense story of father-son artisans in a highly conservative Quechua village. Segundo, the teenage boy (Junior Bejar), is the apprentice to his father Noe (Amiel Cayo), a builder of retablos—three-dimensional portraits consisting of sculpted figurines enclosed in a unique wooden box resembling an altar. Noe’s craftsmanship is so revered that the locals call him “the master,” and Segundo wants nothing more than to be his father; the kid practically worships the man.

But then… Segundo witnesses his father engaging in a sexual act that this harsh castigation-prone community’s sense of justice would likely penalize with great violence and pain—and potentially even with death—if word got out.

The grave dangers of being different in a setting like this are established early in the film when Noe and Segundo walk through a town square and come upon a nasty display of public punishment. A non-local, whom nobody knows, has been tied to a pole as men take turns whipping his naked body while he weeps in agony. The poor guy has been accused of theft (and he may have done it), but the main evidence “proving” his guilty seems to just be the fact that he’s an outsider who no one recognizes… Delgado-Aparicio stages and frames this theatrical demonstration of brutality like it is itself one of Noe’s tableaus. An artful trick the director utilizes several times throughout the film.

Bejar is a revelation as the young man wrestling with the weight of what he’s seen and what it means for his family. A product of his environment, he’s naturally confused, disgusted, and frightened as he confronts his own prejudices, and perhaps some repressed inklings. Bejar resonates pure devastation as Segundo struggles to understand how to feel about his father, the person he adores the most in life. Segundo is a very sensitive adolescent who doesn’t quite fit in with the other boys—he’s a non-athletic pacifist with a sweat-free trade who detests discussions about the sexual organs of female peers. His interests lie elsewhere.

Sullen and full of Segundo’s unaddressed emotions, Bejar’s face is a lively canvas, or better yet—clay. Formative. Adaptive. Modifiable. Reshaped with every change in feeling as his world outlook and sense of self delicately shifts from beat to beat. His mental journey is slow but believably steady, as well as authentic and continuously effective. So much of this story and its protagonist’s conflicts are found within. It’s difficult to pull off brooding, internalized havoc and make it reverberate, but Bejar nails it by broadcasting it from Segundo’s own closet of uncertainty.

As it turns, out these characters are all trapped inside their own retablo, for this somewhat isolated community is in many ways its own box—a box of brazen chauvinism and intolerance, detached from progressive ideals. South America, in general, does not have a stellar record when it comes to queer acceptance, especially in the rural areas. Yet, notably, the film cleverly does not feature any clearcut cases of the villagers’ homophobia, instead choosing to focus on the piety-fueled toxic virility that plagues these boys and men with a licentious barbarism, thus implicitly setting up the bigotry to come.

As expertly constructed as its titular masterworks, Retablo leaves a mark upon the audience. Alvaro Delgado-Aparicio’s film proves to be an evocative coming-of-age story about what it feels like to be queer in a place with strict consequences for those who color outside the lines and do not conform to the majority’s version of manhood. Made with precision and tons of heart and featuring a luminous leading performance from Junior Bejar, Retablo is not to be missed.