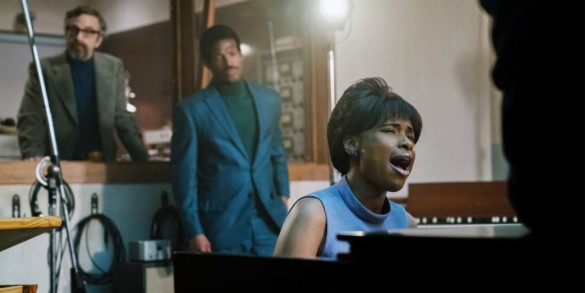 Plot: Following the rise of Aretha Franklin’s career from child singing in her father’s church’s choir to her international superstardom, Respect is the remarkable true story of the music icon’s journey to find her voice.

Respect opens with a young Aretha Franklin being asked by her father to sing at a family gathering, full of other icons of the time such as Duke Ellington, Ella Fitzgerald, and Dinah Washington. She’s praised for her talent even at such a young age, and it’s clear from the start: Aretha is going to be a star. It’s obvious to us as the audience, as we already know the groundbreaking things she’ll achieve, but it also establishes an interesting dynamic with her family. In the following scene, we see Aretha greet her mother, who was recently divorced from her father, and it sets up the question that surrounds the entire film: what role did her family have in her success and how did it shape her life? Some musical biopics make it clear this singer was on their own, such as Freddie Mercury in Bohemian Rhapsody, who entirely cut out his family. Respect focuses on the relationships in Aretha’s life and creates a narrative around how they either helped or hindered her success, and overall shaped her artistry.

Raised in Detroit by Baptist minister C. L. Franklin (played by Forest Whitaker), the film follows Aretha through all the pivotal moments in her life and her career, from childhood to her return to gospel music with her album Amazing Grace. The film doesn’t hold back showing how tumultuous her relationships are, refusing to shy away from the uncomfortable and painful moment she gets pregnant with her first child at 12 years old. After this traumatizing event, Franklin’s father continues to be incredibly strict and tough on her for a majority of her early career, to a point that borders on abusive. Forest Whitaker doesn’t take any of these scenes lightly, and he commands the room every time it’s shared with his co-star Hudson. He truly embraces the terrifying personality C. L. Franklin is portrayed as and gracefully teeters the line between cruel intentions and complications of a father who thinks he’s doing what’s best for his child. He plays many abusive moments as if his atrocious acts are forms of love, further complicating the emotional connection between father and daughter. It’s difficult to watch, but ever so important to truly understand the trajectory Aretha’s life takes.

As her career takes off, Aretha replaces her abusive father with an abusive husband, still commanding her every move and taking credit for her success. Hudson is effortless in showing how strong and powerful Franklin is while performing and singing, and how timid she is when she’s around others, almost afraid to speak her mind. After she leaves her husband, her career and her priorities shift, as does her demeanor. She slowly turns into the controlling figure she’s always had commanding over her, and in the process destroying the relationships of those she loves. As she transforms into a different person, the film delicately draws the connections to how her relationships with her mother, father, grandmother, husband, and sisters shape her artistry. Those close to her either push her too hard, comfort her, hold her back, or embolden her to dizzying arrays of confused directions. It eventually reaches a breaking point, where she doesn’t know who she is or who she’s become anymore, losing everyone who’s cared about her in the process and again, setting her artistic work on a new course.

Hudson truly transforms in this role to the point where she disappears into the icon she’s portraying. Aretha Franklin handpicked Hudson to play her in the biopic, and it’s clear that Hudson not only delivers but excels. She effortlessly morphs from one phase of Franklin’s life into the next and truly guides the audience along on the journey, becoming the driving force behind the film.

Respect isn’t without its criticisms though. At two hours and twenty-six minutes it definitely feels a bit overlong. But it’s hard to determine what parts need to be whittled down, as each feels essential to authentically tell Ms. Franklin’s story. Musical biopics have also become known as Oscars bait, following the same formula over and over again. Respect definitely can fall victim to some of the common tropes we see in these films, but the powerful performances and moving story are too distracting to make its faults grotesquely noticeable.

I didn’t go into Respect with high expectations. While Jennifer Hudson is an incredible performer, I was worried that this would feel too formulaic to be enjoyable. I came out blown away and incredibly emotionally moved by the hardships Aretha Franklin struggled in her life, and how genuinely connected Jennifer Hudson’s performance feels. She is truly worthy of the early Oscar buzz she’s already receiving.